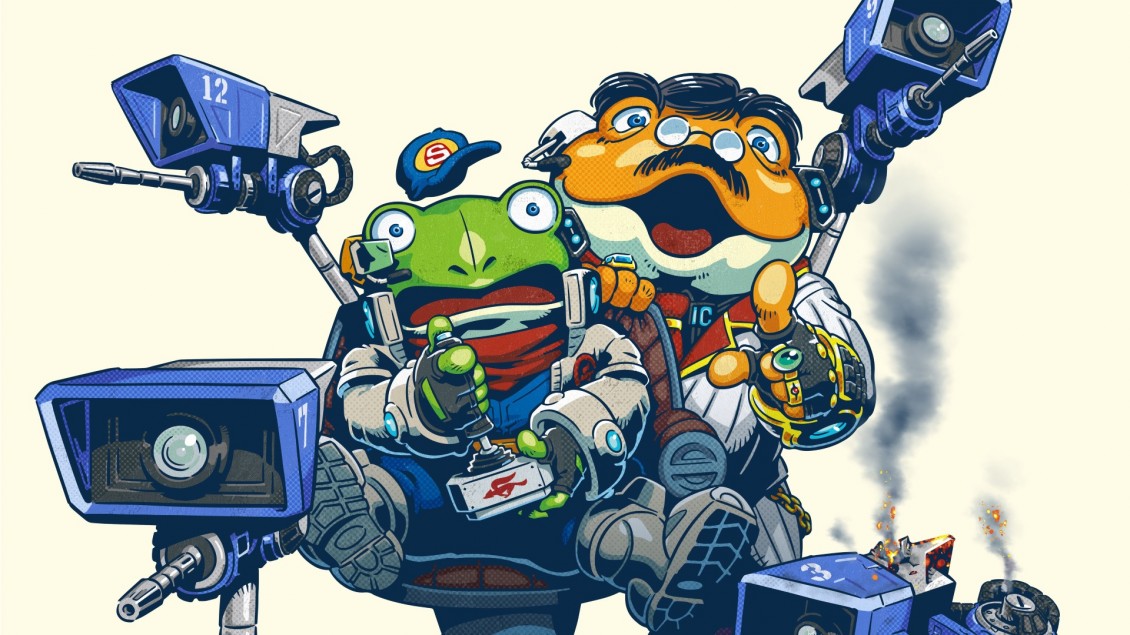 Like an intergalactic car park attendant, I’m staring intently at an array of CCTV screens. Spotting three tiny Ghoomba-like droids, waddling towards one of the many entrances to Uncle Grippy’s mining complex, I switch Camera 12 to the main screen, and using the camera-mounted guns, fire a round straight in between their illuminated eyes. Decimated, the tiny Chaos Class Droids collapses into a pile of salvageable parts and other junk.

I glance at Camera 4. Camera 9. Camera 2. Shielded Combat Droids roam the corridors of my metallic sanctum while I was busy taking care of its smaller brethren. Camera 1 has been stolen by a chicken-like droid, Camera 7 just went offline, and no longer can I get a shot around the shields of those Combat Droids. The upper-half of a standard Combat Droid is scuttling around, speedily avoiding the fire of my remaining cameras, and a small tank just took down Camera 6. I wipe my brow as Camera 7 finally comes back online, only to spot a droid resembling a snail reach the core of the mine.

Balls. Maybe I should have picked the slowdown camera instead of the lock-on. Ignore the family-friendly sci-fi exterior that borrows from a long-dormant Nintendo franchise, because the game formerly known as Project Guard can somehow convey the sort of dread that you’d expect from Silent Hill or Resident Evil. But maybe I’m ahead of myself, because to the uninitiated it’s not necessarily clear what Guard is all about.

Grippy Toad, the uncle of Star Fox’s chief engineer, Slippy, just happens to own a prosperous mining company, making money from unearthing precious metals while the war on Andross rages on. With such a booming business and a conflict going on, it’s only a matter of time until someone wants to initiate a very hostile takeover of Grippy’s business. You’ve been taken on to protect each of Corneria Precious Metals Ltd.’s mining complexes from an onslaught of droids. Some are Chaos droids, designed to distract you from the real threat of the combat droids that exist to reach the centre of your base and destroy its core. Destroy a predetermined number of Combat droids, and the whole lot will retreat, signalling a successful defence.

Before the attack, you’ll have the chance to take your time and place your twelve cameras wherever you see fit, and rotate them to suit your purpose. You might want to have at least one camera on each opening, a few in the centre of your base, or even some facing down long corridors. Eventually you’ll unlock better cameras that contain better offensive abilities such as freeze shots and the ability to slow down gameplay, giving you a little breathing room in more hectic situations. While the default camera positions might serve your purposes, most of the time, you’ll get better results by experimenting, especially as you’ll be shown beforehand where the most enemies are likely to appear. You can change these positions while the attack is happening as well, which you’ll definitely need to do when enemy bots start taking your cameras offline, and eventually start carrying your cameras around. Once you’re happy, the attack (and the chaos) begins. The difficulty curve is spot-on, as you’ll be eased in slowly, facing foes that aren’t too tricky to best. Eventually things will get tough, as you’ll be swarmed by endless swarms of droids, containing multiple types of Chaos and Combat bots, requiring a great deal of quick thinking and plate-spinning to ensure you aren’t completely overrun. You’ll panic, you’ll make mistakes; fail and try again, but you’ll have fun doing it. There’s a lot of experimentation to be had, seeing what types of cameras work in what positions, and how to prioritise the bots that spawn. You may find yourself ignoring the smaller Chaos robots in favour of taking down a magnet-wielding foe that messages around with the direction half your cameras are facing. Each enemy has it’s own way of giving you grief, and you’ll learn to fear quite a lot of them, especially in bulk.

Hopefully, you’ll stop the enemy’s advance, and you’ll be rewarded with plenty of precious metals from enemy scrap, which will help you rank up and unlock extra missions and better equipment in which to take on future offenses. Eventually you’ll come up against boss fights that’ll test everything you’ve learnt in prior levels, and they’ll do their best to ensure you don’t make it to the next planet, and find out who exactly is attacking Uncle Grippy’s company.

Of course, you’ll notice that I haven’t spoken too much about Star Fox’s involvement in the whole situation, and that’s because the whole branding is Star Fox Guard is very minimal to the whole game. Sure, acquaintances from Slippy’s day-job occasionally appear in between levels, and you can unleash a Star Fox airstrike once a day by scanning your Fox McCloud or Falco Lombardi Amiibo, but it’s a testament to Guard’s quality that it would be just as good a game even without the use of the characters and settings from Star Fox. At times, this is a thrilling game, and there’ll be times when you’ll breathe a sigh of relief after fighting off the last bot just as it’s about to finish off your base. Each level lasts a matter of minutes, and never outstays its welcome.

On the flipside, there’s plenty of extra content as well. There are tons of extra missions to unlock, rankings to increase, and equipment to unlock – there’s even a very cool mode where you can put together your own crew of misfit robots, customise their look and then plan out their entire attack pattern for each of the maps. Other players can then try and defend themselves against your army, while you can pit your base-defending skills against attacks as well. A successful attack or defence will increase your online score and also increase your ranking for the main game. It’s a great mode, and it’s fun to put together the most difficult attack patterns you can think of – especially as it can give you the tools you need to get past the trickier sections of the campaign.

From start to finish, this isn’t a lengthy title, but the focus is on unlocking and tackling all the extra missions and taking on the online world. Built on simple strategy and intense twitch gameplay, Star Fox Guard gets more and more exciting as the levels get tougher. If it takes the Star Fox name to get more people to take a chance on this experimental title, then Nintendo has made the right choice.

More could have been done with the Star Fox branding.
Could have done with more planets.
Fiddling with the gamepad can get tricky during hectic moments.

I’m glad Nintendo finally got around to letting Project Guard see the light of day. It’s a fun and unique gamepad experience that gets better the further you get into it.