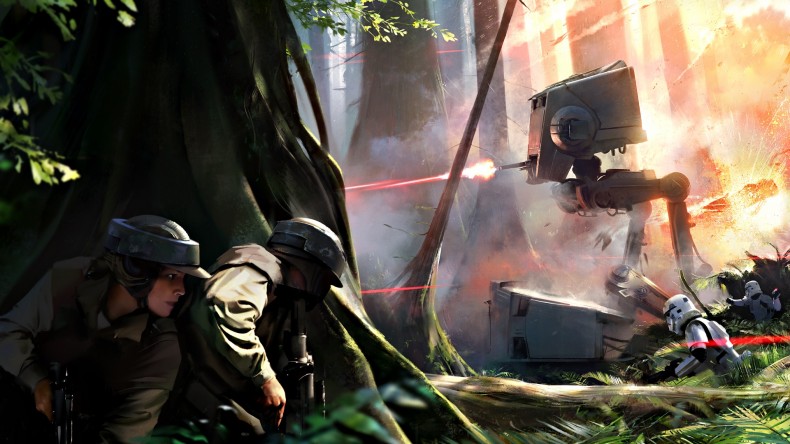 A TIE fighter’s lasers cut a staccato rasp as it strafes the trench ahead of me, throwing up a mini-blizzard and a shower of bodies, the scream of its engines adding to the cacophony as it whips overhead. As the smoke clears an AT-ST crests the near ridge, its head sweeping left and right, raining death, and in the distance an AT-AT makes its way relentlessly towards the Rebel base. This is Battlefront. This is Star Wars.

Plenty of other games have tried to capture that Star Wars essence, with Lightsabers, the Force, Stormtroopers and Jedi combined in ever more complex ways, but none of them, not a single one, is a patch on DICE’s take on Battlefront.

Everything looks exactly as it did in the original trilogy. X-Wings, blaster turrets, Probe Droids, they all match the models they’re based on so perfectly it’s clear that Battlefront has been a labour of love for the entire development team. If anything, the sound design is even better. Close your eyes and you’ll be able to picture what’s going on just from the noise of a blaster, the rhythmic stomp of a walker, or the whine of a thermal detonator. John Williams’ score is present and correct too – although in slightly remixed versions – and it fits the game sublimely, from the energetic refrains during battle, to the calmer tones of the post-match scoreboard and menu screens.

Everything is taken from the films, and Battlefront benefits massively as a result, but one thing no one expected DICE to carry over so well is the accessibility of Star Wars. From young kids playing at Stormtroopers in the schoolyard, to adults at conventions also dressing up as Stormtroopers, Star Wars is beloved by a massive audience across the globe, and there aren’t many who couldn’t pick Battlefront up and enjoy it.

Playable in first and third person, it has more in common with Call of Duty than DICE’s own Battlefield series. Combat is twitchier, a series of running battles rather than static warfare, and the power-ups scattered around the battlefield add a pleasant arcadiness to proceedings. These give you single-shot uses of more powerful weapons – with everyone’s starting weapon a form of blaster – or the chance to jump into a vehicle. There’s even the opportunity to play as your favourite character from the films for a short span. You don’t have to spawn camp to get these; instead you’ll happen upon them during the natural course of a map, giving everybody a chance at the really good stuff. None of the above is to say that Battlefront can’t be enjoyed by the hardcore. The different blasters – one of the types of unlockable – all feel weighty and subtly distinct, with varying ranges, damages and fire rates to tailor them to your style. The different craft you can pilot are likewise great to fly; the first time you jump into an X-Wing is a very special moment. Again the controls aren’t hard to use, but they’re just an utter joy to zip around the skies in.

Star Cards act as character differentiators. You’re able to take a hand of three into battle with you, and these can range from a grenade or a jump pack to boosts to your weapon. Simple to use, they have a short recharge, preventing you from spamming them over and over. In a neat move, you can use the Star Hand of your randomly assigned partner in each match, allowing you to try out different cards you may not have unlocked. Your partner also acts as a spawn point, allowing you to get straight back into the action, although the spawn points are never too far away from the frontline.

Despite lacking Battlefield’s more strategic gameplay, the game-modes do require you to think. The headline is Walker Assault, where the Imperials need to protect their AT-AT’s as they march towards the Rebel Base. Countering them, the Rebels must capture and hold various uplinks, used to call in Y-Wing assaults, which disable the walkers and make them vulnerable to other kinds of attack. The Rebels are slowly but surely pushed back as the game progresses, meaning different parts of the map come into use, adding a nice dimension. Control Point-based Supremacy borrows the same maps, but has a more tug-of-war feel to it. With up to 40 players, it feels busy, but requires some tactical nuance to play well. Elsewhere there’s a Team Deathmatch mode for 20 players, and variations on Capture the Flag and King of the Hill. The standout modes – besides Walker Assault – have to be Fighter Squadron and Heroes vs Villains. The former sees two sides, backed by AI fighters, trying to get the most points first. Killing a human player is more valuable than an AI, while the occasional transport to destroy/protect can get you even more points. There’s also occasionally the chance to jump into the Millennium Falcon and Slave 1, which is precisely as awesome as it sounds. Essentially it’s a multiplayer Rogue Squadron game, and I’ll leave you drooling over that.

Heroes vs. Villains, meanwhile, sees two teams of six battling to the best of three rounds. Three players on each team take the roles of Luke, Han and Leia, or Vader, The Emperor and Boba Fett, with the team with the last hero left alive winning the round. It’s a great palate cleanser in between the giant battles of the other modes, even if it is only a minor distraction.

Speaking of which, there is a single-player Horde mode component to the game. It’s as it sounds: you (and maybe a friend) taking on waves of Imperial Troops that get increasingly harder. It’s fun every now and then, but it pales in comparison to the multiplayer stuff.

Longevity is where Battlefront is going to struggle. The maps are brilliant, funnelling the action nicely while providing more than one route through. Endor is the highlight, with thick undergrowth and a narrow ravine to contend with, but with only four locales – Hoth, Tatoonie and the volcanic Sullust being the others – you’ll start to crave for more diverse settings after a while. The free Battle of Jakku DLC in a couple of weeks will alleviate this somewhat, but for now it’s a slight bugbear.

Online-only titles normally entice players with a massive unlock tree too, but again Battlefront may find this a struggle. There are top of the line weapons, Star Cards and visual customisations to aspire to – want to be anything other than a human? You’ll have to wait until you’re level 40 – but this might not be enough for those of you used to Call of Duty or Battlefield. These are minor deviations from a sublime game however, and they’ll only become noticeable after you’ve sunk plenty of hours into it.

At its core, Battlefront is a great shooter. Add in a perfectly crafted Star Wars dressing and an impressive amount of cinematography and you have my favourite multiplayer shooter in years. Accessible, well made and full of really, really cool moments, it’s hard not to love it.

Slight lack of depth.
Could do with a few more maps.

Accessible, well made and full of really, really cool moments, it’s hard not to love it. Add in a perfectly crafted Star Wars dressing and an impressive amount of cinematography and you have my favourite multiplayer shooter in years.