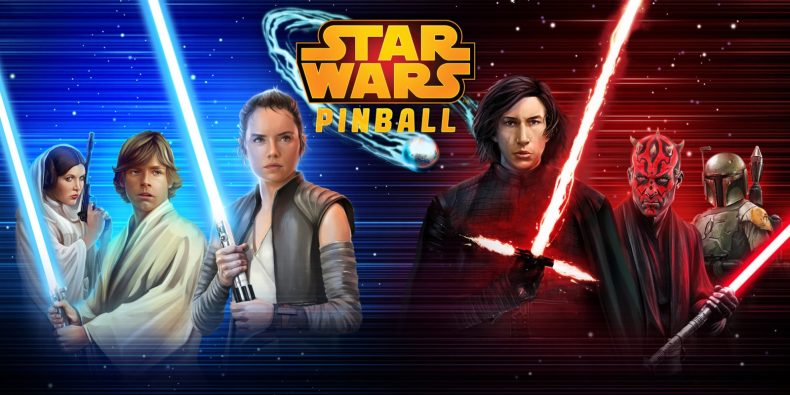 Ah, Star Wars. My sweet, sweet Star Wars. There are few things I love in this life more than Star Wars (perhaps my wife and kids, I guess), so when I found out that the fate of the galaxy was literally in my hands, and to be decided across various digital pinball machines, I couldn’t help but get a tad excited. This collection sees all 19 pinball tables that Zen Studios has previously released come together in one game, and it also boasts the first physical release for the developers as well. I’ve played a handful of the tables before, but having them all at my disposal whilst I sit on the train or the loo, getting high scores and experiencing an incredibly faithful tale told through pinball is a wonderful thing.

For the Switch release of Star Wars Pinball, Zen Studios has put together a career mode for those wanting some form of progression whilst taking in the sights and sounds of the Star Wars Universe in short bursts. There are a series of Operations comprised of different tables, all with various challenges to complete. The return of the Jedi table requires you to make the ball travel over as much distance as possible (with the timer in parsecs not seconds!), whilst the Vader table wants you to get the highest score possible. Other challenges include a 3-ball limit, and one that only gives you 200 uses of the flippers, all making you change how you play and implement your Force Powers and Talents. These wonderful abilities are unlocked by acquiring Holocron Shards. The better your score on each table, the more of these Shards you’ll win, with a maximum of three per table. Some of the powers give you points for travelling over certain distances whilst others improve your score multipliers, and you can upgrade each one. Before every table you start, you can switch in and out your Force Powers and Talents, giving you a sense of strategy on how you use them. There are some cool levels that have nothing to do with pinball at all, such as moving BB8 out of the way from a huge net, piloting X-Wings and TIE fighters, as well as a lightsaber battle. These missions also give you opportunities to earn the Holocon Shards so you’ve always got a healthy stash of them coming in.

The tables themselves are well-detailed and vibrant, with the famous sounds and music featured in the movies. Each one packs in various sections that follow entire movies and TV series. The Moon of Endor, the Death Star, Jakku, Tatooine, and many more bring each table to life, with tons of characters popping up, whether through the audio or on the actual tables. Hitting a ball through a certain area a certain amount of times triggers sections that require you to complete mini challenges, such as collecting wood for Chewie, hitting Darth Maul for a million points, aiming at crosshairs to take out a Star Destroyer, and beating the hell out of a Rathtar. There’s so much fan service it’s unreal. The game is loads of fun to play, and that’s the fundamental thing that makes this worth spending time with. Jump in or out whenever you want, spending five minutes or five hours with it, it’s entirely up to you.

You can play the game in lots of different ways, and a simple touch of the Minus button will switch the view vertical, making it feel more like an actual pinball table. The only issue is the button spacing when switched that way, as it feels unnatural to hold. There’re plenty of options when holding it normally to fit your preference, though. Whether you’re in handheld or playing it docked, it holds up really well. HD Rumble can also be switched on, giving it a feel of an actual pinball table, meaning Zen Studios has done an awful lot to make the experience as realistic as possible. Whether you prefer Siths over Jedis or vice-versa, Star Wars Pinball lets you pick a side and earn points to decide the ultimate winner of good verses evil. When the game goes live, your victories will add to a constant battle of the dark side versus the light. There’ll also be Galactic Tournaments and League Play when the game launches, but none of these were available for review. How these will work remains to be seen, but if you’re in for the single player experience, there’s not much more than playing through the Career Mode and returning to the tables to achieve high scores. This might be fine for some, but if you don’t want to go online you might find there’s not much to do once you finish the Career.

Star Wars Pinball is a lot of fun. The tables are incredibly well-crafted, the audio is excellent, and the ability to turn Star Wars into a pinball game shows just how creative Zen Studios has been here. The Career mode may not take a long time to beat, but there’s replayability in going back and getting the most amount of Holocron Shards for each level. Some of the voice acting may have been recording by other actors as it seems a bit off at times, but it’s barely noticeable, especially when you’re having such a blast on the tables.

Star Wars Pinball is a superb time-waster, packing in plenty of fan service and some well-crafted pinball tables. If you're a Star Wars fan you need to play this!