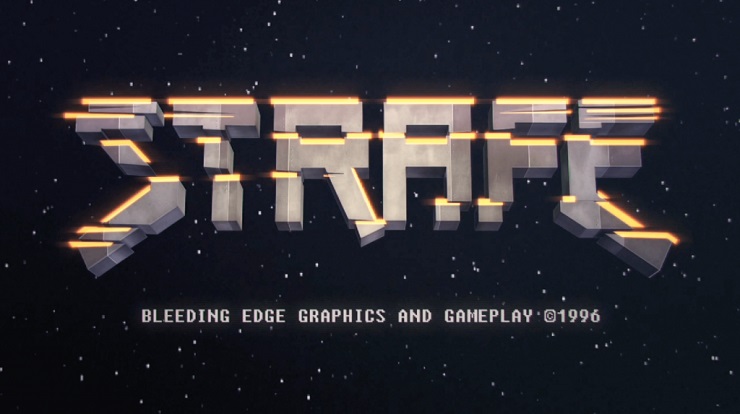 The biggest FPS titles tend to have a similar formula, and that’s fine because they’re still a great craic. You pick up a gun, wander around a battlefield, shoot some enemy soldiers, or some aliens, and when things get a bit too much, find a wall and take a breather. But what happened to that 90s style of shooter? You know the ones, where wandering became sprinting, shooting some became many, and finding solace was non-existent.

We were treated to the phenomenal return of id Software’s Doom last year which was a pleasure to play, and it reminded us just how cripplingly hard first-person shooters used to be, but it was new, and it was a reimagining, feeling very different to the Quakes and Dooms of our childhood. STRAFE embodies everything about the latter – right from the hordes of unrelenting enemies and fast-paced movement they did so well. The problem is, do we really need to return to these shooters when the market has changed quite significantly since then? When I first started playing STRAFE, I got more and more frustrated because I had forgotten how to play in this particular way. I tried with a controller, but found it nowhere near as responsive as I needed it to be. After an hour or so of getting overcome by enemies at every turn, I went for the old faithful mouse and keyboard combo. It’s a fairly straightforward set up, where the left mouse fires your weapon’s primary ammo and the right uses its secondary, but it suits the speed of which the combat occurs.

After picking your starter weapon (shotgun, machine gun or rail gun), you’re thrust into a procedurally generated hell. A space station known as the Icarus has been besieged by weird murderous aliens who really want to kill you. Some are running at you wielding blunt weapons (all looking like they’re wearing Yoko Taro masks), others are shooting plasma bolts at you, and then there’s the acid. Throughout the different levels you’ll encounter hundreds of them, and more often than not, you’ll get shot at time and time again with no chance to breathe. The trick is to keep calm, never stop and reload at the optimal time. Some enemies take more time to kill than others, but all of them die a bloody death, literally. Buckets of the stuff cover the walls and floor, and as glorious as it is to watch the Icarus get a new paint job, it also acts as a guide. You do have a map, but remembering where to go is helped massively by the gore. It’s all so pretty – like a Jackson Pollock painting. Shoot a fella in the head with a shotgun, and watch a fountain of blood ejaculate from his neck stump; fire a grenade from your assault rifle and watch as tens of aliens explode like burst pipes and the heads in David Cronenberg’s Scanners. You never get tired of watching your hard work staining every inch of your surroundings.

One thing that did bother me was the enemy AI. I found it quite frustrating how stupid they could be at times. In some of the levels, there are high pathways with sheer drops, and mesh bridges over green acid, and if you stand at the foot of them and watch enemies come from the other side, you’ll find over half of the horde drop off and plunge to their death or get burnt in the luminous sulphur. I’m not going to lie, though – it helps out a lot. It just feels a bit cheap, especially as the majority of the levels are built so smartly. Pixel Titans has managed to fill levels with lots of secrets, such as hidden passageways, and finding them can be fun. It’ll take you a bit of time to do this, however, becaues you rarely have a chance to explore.

Outside of the main game, there are three modes that allow you to compete with other masochists online. STRAFEZONE is a weekly challenge mode, SPEEDZONE is a chance to beat other player’s speed runs, and MURDERZONE is a horde mode where you must survive 10 rooms/waves of aliens (I didn’t even survive the first one). Whilst I didn’t get to try out STRAFEZONE, the other two were very appealing, and when more people are playing, trying to beat scores on the leaderboard will more than likely be an addictive pastime due to the challenging nature of the game. Your weapon of choice can be upgraded using the scrap metal you find on enemies, and there are upgrade benches you can use to buy shields as well. The problem I found was due to the procedurally generated levels, they were sometimes seldom found in a playthrough. Likewise, the food boxes you can use to replenish health were also rare, thus making it even harder than it already is. I didn’t stop moving. I couldn’t. STRAFE kicks your ass, and if you’re a fan of S & M then go right ahead and play it. There’ll be some of you with much better reflexes than I, but for the most part, it is so fucking hard.

Even though there is a lot of appeal here, STRAFE ultimately falls prey to the nostalgia, and once you’ve spent four or five hours with it, the urge to keep playing begins to waver. Maybe I’ve become too accustomed to the way shooters are made now, or maybe I’m just getting old. Either way, STRAFE will more than likely appeal to the older gamer. There’s a cool FMV tutorial, and the music is energetic, but I got very tired in a short amount of time. Still, if you’re looking to get that bollocks hard FPS itch scratched, STRAFE is a really good place to start.

As far as frantic FPS's go, this is one of the best, but poor AI and a ramped up difficulty might prove too much for some.

STRAFE has a new release date

STRAFE ready to fill your life with gibs on March 28

Devolver Digital showcased a ton of stuff at PlayStation Experience