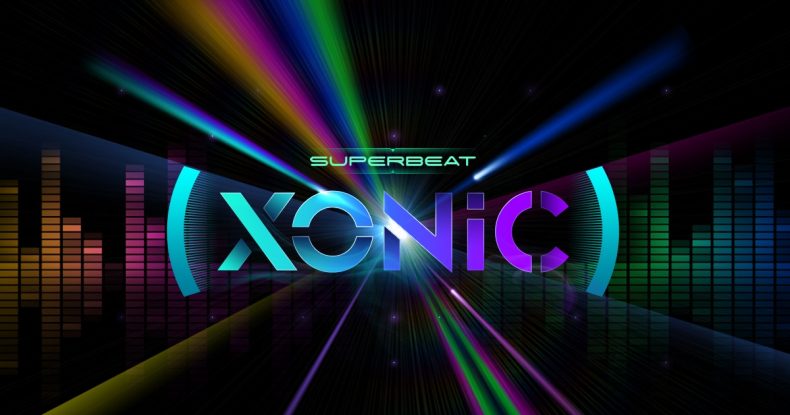 Superbeat Xonic was one of the biggest surprises for me when it comes to rhythm games. The Vita has been home to some fantastic rhythm games and the ones I keep going back to even today are Superbeat Xonic and Taiko no Tatsujin V Version. This is surprising because the ones that got me hooked were the Miku games. Superbeat Xonic from Nurijoy has seen ports to PS4 and Xbox One recently but the only one I was excited for is the Switch version.

Your aim here is to keep playing through songs in sets of 3 to raise your level and unlock more songs and cosmetics for your DJ icon in game. Gameplay involves tapping or pressing or holding inputs depending on the requirements on screen and there are multiple difficulty options and game modes. The basic 4 TRAX mode is what I’d recommend even for rhythm game veterans just to get used to the new controls. I had a rough time in the first few songs because this game is basically muscle memory to me on the Vita and the alternate analog stick placement on the Switch threw me off for a bit. You continue to unlock songs with every few levels until everything is available and there are more than 60 songs in it from the get go with more coming as DLC. The only complaint I have with the song list is the removal of the Guilty Gear Xrd Sign opening song that the Vita release had. The remainder of it is an eclectic mix of some really catchy music from almost every genre out there. VOEZ and Deemo have already seen Switch ports after originating on mobile or the Vita. The thing about these games is they only play in portable mode and have no button input method supported. The developers have promised an update that adds this but they’ve been touch only since launch. Superbeat supported both button inputs and touch controls on the Vita. In fact one of the things I liked the most was being able to use a combination of both control options during gameplay. The PS4 and Xbox One versions obviously only support button inputs and this made me want it on the Switch.

The great thing about the Switch besides allowing for hybrid gameplay is the split Joy-Con play and other nifty things like HD rumble. Many games have been doing local same screen or split screen coop using a single Joy-Con. HD rumble is only used for one type of note instead of a bit for every different button press. I get that doing a whole pattern for the actual music is not feasible given the size of the song list but the developers could’ve added some rumble for each input press or just the menu interactions. This is also a perfect candidate for having local co op with notes going to the left or right side from the center. While not explicitly in the port, you can play with a friend on the same Switch with a Joy-Con each. The other platform versions do not allow for something like this obviously. When it comes to performance, I only ran into one issue while selecting a song that caused the game to freeze for a few seconds. The visuals look excellent on the Switch screen and I continue to be impressed with the animations for small interactions with the menus and interface. I’m curious to see the additions in the form of new songs because I already really love the selection here.

In my original review of the Vita release, there were a few things I didn’t like such as the lack of proper music videos in the background during gameplay, but this is still an essential purchase for rhythm game fans. The Switch release sees some changes but remains a fantastic way to play it. While not much competition since we’re still in year 1 for the console, Superbeat Xonic is easily the best rhythm game on the Switch and I’m glad to see it on a new portable for more people to experience. While it lacks the licensed songs that some rhythm games on other platforms have, it makes up for them in slick presentation and brilliant gameplay. I hope the developers can patch in proper HD rumble support in the future because this is as close as can be to the definitive version of Superbeat Xonic.

No proper use of HD rumble

Superbeat Xonic on the Switch is another fantastic way to play one of the best rhythm games in the last few years but one that should’ve made better use of the platform’s unique features.