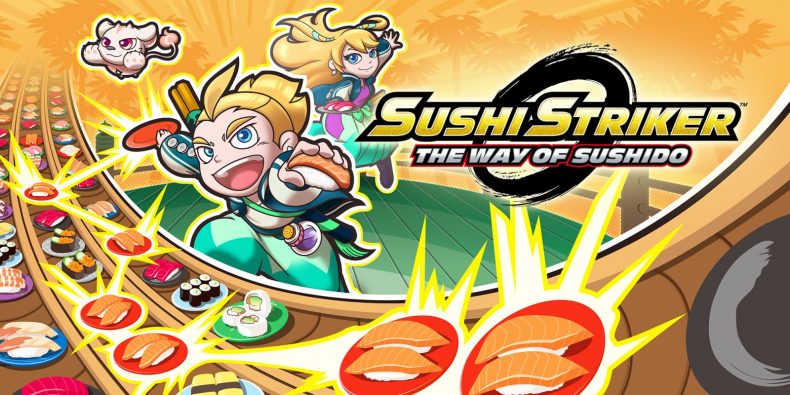 Imagine a world where your favourite food is taken away from you, it’s delicious flavour only to be had by the upper echelons of society while everyone else has to fend for themselves. Imagine your aching bellies as days go by with you living off of scraps, having never had a decent meal in your life. Imagine your tired, malnourished body crying out for a form of beautiful sustenance that makes you feel orgasmic…now imagine that food is sushi.

That’s the premise of Sushi Striker in a nutshell. As Musashi, the child of a man who fought in The Great Sushi Wars, it falls to you to fight on behalf to the republic and defeat the fascist empire, thereby allowing the public to eat sushi to their heart’s content; Sushi Strikers do battle in this world by eating sushi supplied to them by sushi sprites and once the food has been consumed the plate can be thrown at your opponent, yes, all the story beats are just as weird.

A world where the crowning delicacy is sushi is bizarre to me, sorry if it isn’t to you, but it just isn’t an idea I can get behind, but, I did find myself feeling hungry while playing this, so maybe it isn’t all bad. The people you come across all worship raw seafood in different ways, some prefer salmon, other octopus while there are also some who like it covered with wasabi; there’s even a scene where Musashi stares in horror as someone eats the fish and throws away the rice because it’s more efficient, it’s just plain dumb, silly fun, and it’s good too. Sushi Striker is a matching puzzle style game and despite all the different types of sushi on display here it’s the plates you need to pay attention to. There’s loads of different stuff like a Shrimp Tempura, Fatty Albacore Salmon and California Rolls, but look underneath them and see whether the plate is blue, green, pink or yellow and black, that’s what you’re going to be basing your matching on, and you’ll have seven seconds to analyse what you’re doing.

Seven seconds is a rather arbitrary number, but it’s in that magic zone where it isn’t too long or too short. You’ll have three rows of sushi and one shared lane between you and your opponent moving back and forward, and you’ll need to hold on one and link to other plates to create a chain, the longer the chain, the more plates you’ll stack and the bigger the stack, the higher the damage you’ll do. Different colour plates and quality of sushi will apparently do higher damage but those stats are never divulged to you, so don’t let that distract you from your main goal, accumulating plates.

Musashi has a base stamina, which can be bolstered by the sushi sprites defence stat you choose to battle with, both Musashi and his sprites can level up to improve this. As Musashi levels up he also improves his strength while the sprites quality of sushi improves every two levels increasing your damage output. You have five stacking areas for plates, and if you create a sixth stack your right-most stack gets automatically thrown. If you want to throw manually you can do so by flicking up on the stack, and flick multiple stacks to combo and do more damage at one time.

BUT WAIT, THERE’S MORE! As you chain plates together you fill several gauges. There’s a skill gauge for each sprite you have equipped, and when full you can activate their skill, for you main sprite Jirai you can turn all the plates one colour allowing you to make one giant stack to throw, another splits your stacks into two making them deal double damage, others help you heal, do a direct damage attack, or even sneakily bolster your stack sizes. Knowing what your sprites do and ensuring you have a good combination of abilities is only half the battle. There’s another gauge that is filled with matches, and that’s the Jubilee gauge which takes the form of a little lantern next to your health, filling this turns the edge of the screen rainbow coloured and your stacks will deal 1.5 times the damage. I found pretty good success timing my matches for five stacks on Jirai’s ability, activating a Jubilee on that match and then doing the split stack ability to deal even more damage during the jubilee phase, but with enemies having abilities you won’t always have seen before you will need to check your load out and change it accordingly.

Thing is, it’s not only the enemies who conspire against you here, the control methods also fight against you. You can play using a controller, but I wouldn’t advise it, it’s too slow and for a game that focuses on speed to deal damage it’s just too unwieldy, touch screen is the way to go. But, even touch screen has it’s drawbacks, and it’s all down to a really cluttered battle UI.

Allowing Musashi’s sprite and that of his enemy at the top takes up a bit too much of the screen real estate, making the distance between the lanes and your plates stacks much too close to each other. On way too many occasions the game registered me touching the lane below mine when attempting to start a chain, and part way through a chain I’d find it selecting a lane I didn’t want and effectively ending my chain because once you’ve selected a plate in a chain you can’t unselect it. Worse than this is the fact your plate stacks overlap your bottom lane, meaning that if you have high stacks you can’t start stacks at the point they meet, then when you’re trying to combo your stack throws at speed you’ll end up hitting a plate on the bottom lane instead and you’ll find you have it thrown the stack and you’ll have realised a little too late.

The battles you take part in can vary wildly in difficulty, but mainly due to the random nature of this style of game. Regularly you’ll find you can’t make long matches no matter how long you wait on a stack for, and there are game types where you’ll need to make chains of particular lengths before you can claim them, and when the plate lines prevent you from doing that and that causes you to lose it’s hard to not be frustrated as it isn’t something you could possibly help. You will find that going back doing older levels to get higher ratings will earn you good XP rewards, and generally you can brute force your way through these unfair moments. What the game does get right is it’s presentation, you could mistake it for something based on a Saturday morning anime. Certain story elements are presented with superbly drawn animations, and these are well voiced, written and really funny. The rice story from earlier is a particular highlight, and a bunch of anime tropes are present and correct, as a result no matter how frustrating the game can get it’s hard to hate it because of these vignettes. There are other talking head segments with considerably shortened voiced dialogue, but they’re still well written and funny, characterisation is good throughout.

Musashi’s adventure is no raw deal, it’s laden with charm and humour, and when the battles flow they’re really fun. The faults that I’ve listed above aren’t specific to Sushi Striker so it’s not really fair to knock it too much for them, but there is an argument to be made for the fact that not much has been done to improve those flaws. The UI issues, however, aren’t quite as forgivable. Yes, the problems can be mitigated with considerable grinding, but while there is reason to go back I’d prefer it if I didn’t feel forced to do so.

Anyway, Sushi Striker is good, silly fun, my little boy likes it and it’s obviously good to play against each other. Yes it has faults, but like the grind to get on you’ll find you can get past them, your mileage will obviously vary based on how palatable you find that.

A fun, fast, frantic puzzle matching game that hopefully won’t frustrate you to the point you want to throw your Switch like one of the game’s plates.

You may also like
nintendosushi Striker: The Way of SushidoReviews