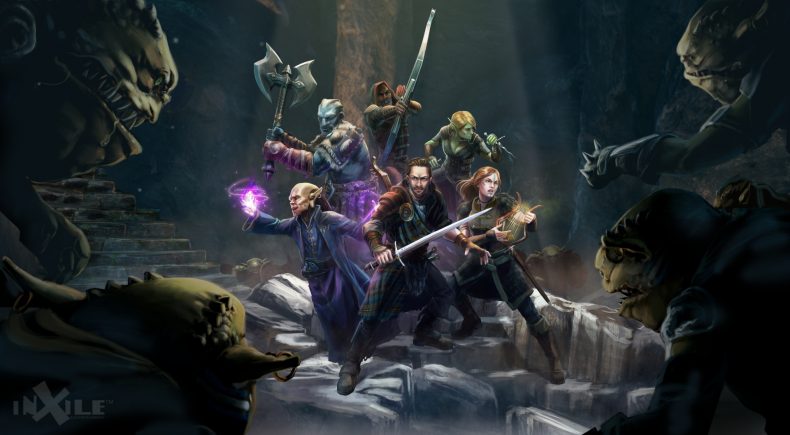 The last Bard’s Tale that I played was that bawdy 2004 adventure on PS2 and Xbox, which was like Diablo but with occasional boob jokes. No way that would fly in today’s climate. Perhaps that’s why The Bard’s Tale IV: Barrows Deep (no really, there’s no apostrophe in Barrows – perhaps it’s a scale of depth, like “we’re thirty barrows beneath the surface”) is a more serious adventure. Don’t get me wrong, there is still humour. There’s Thomas Hoff and his unattainable soup, as well as Farmer Killop and his love of all things cabbage, carrots and potatoes. The Bard’s Tale IV does have humour, but it’s far more understated and less about the objectification of women. A little more on the level of Divinity: Original Sin 2, just not quite as clever.

It’s not just the humour that has changed since that old console loot ‘em up, either. The Bard’s Tale IV is a combination of genres, with the main exploration portion of the game taking place entirely in first person, which then shifts to a third person, turn-based combat system when you inevitably end up in a scrap. It reminds me a little of things like Ultima Underworld and Eye of the Beholder; it works incredibly well, too. The story takes place in Skara Brae, where a religious group known as the Fatherites have begun persecuting non-humans and anyone associated with the Adventurer’s Guild, which has been deemed an illegal organisation. Something else is afoot though: somebody is trying to frame the various dwarves, elves, and trow (a race of goblin-looking folk) for heinous crimes in order to turn the populace against them. Combined with the burning down of the adventurers’ tavern, sending you and other folk underground (literally), it falls to you and a ragtag bunch of weirdos to uncover who is behind this foul plot and to fight back against the Fatherites’ downright racist regime. It’s a far cry from gold hoarding and boob jokes, eh?

I must say that Skara Brae and its underground cousin, Skara Brae Below, are gorgeous to look at. As you wander around in first person, you can appreciate the detail set into each and every building and piece of debris. Shafts of light filter through into the depths below, while above ground is bathed in a mid-afternoon glow. Now, despite my PC exceeding the recommended requirements, there are still some technical issues present mainly underground. There are semi-frequent pauses in Skara Brae Below, possibly as the Unreal Engine loads in its textures, but thankfully it very rarely affects the gameplay. Honestly, every area in this game is visually appealing. Unfortunately, the beauty of the environments is not matched by the character models. They’re detailed and varied in their design, with all interactive characters fully voiced too, but not one of them has a pretty face. Fugly, I believe was the term used in the chat, when I streamed the game. You may not entirely appreciate them all being fully voice either, as our resident Scot, Mick, pointed out that the accents are atrocious. The actual voice acting isn’t bad, indeed, the comedy timing is excellent and the banter between your party is entertaining, but the accents aren’t exactly true to our friends up north.

In fact, the sound in general is of high quality. The music sets the scene beautifully, with NPCs singing their songs as they work in Skara Brae, and the ambience in dungeons gives every area a sense of atmosphere. Not always as menacing as you expect in most fantasy RPGs, especially when you find creatures stuck within stone walls during one particular section (as part of the design, not a glitch), still threatening to do various terrible things to you and your party of adventurers. They can’t do a thing of course, and their high-pitched voices offer no threat whatsoever, but it all adds up to create a wonderful atmosphere in a game that knows when to ease the tension with a laugh. Once you do find yourself in a fight, however, when the funny enemies aren’t buried in a rock face, things do start to get a bit more tense. Each side has their own half of a 4×4 grid, with the ability to move around that half during their turn. If you see an enemy and charge them first, you’ll get the advantage of having the opening move. No matter how many party members you have, you’ll only have a limited number of action points that are shared between them all. You can’t just have everyone getting in the fight, which makes things far more strategic than your average turn-based affair. Some characters may have traits that offer the chance of restoring an action point, which can come in handy, and magic users can also use spell points instead of spending an action point, which can extend your number of attacks or abilities during a turn.

Still with me? I hope so, because I’m not explaining that again. I don’t often enjoy turn-based RPGs, but the combat here works very well and I found myself charging happily into combat, instead of groaning at the thought of another battle. You also get to see how difficult the fight will be, in the moments before you decide to charge in or leg it in the opposite direction – a coloured outline will appear around the enemies as you approach, displaying their power level, with green being an easy win; yellow a little tougher; orange being very tough, and red being impossible. Someone in your group will inevitably give you a shout too, letting you know your chances.

Outside of combat and exploration, The Bard’s Tale IV is full of puzzles. These range from simple block-pushing ones, through to full-on riddles that you may not even be able to solve until later in the game. There are Elven weapon stands that require certain items to activate, as well as pedestals that offer riddles as to what object(s) you will need to present in order to unlock their secrets. This gives the game a distinctly old fashioned vibe, going back to the stories of Tolkien, Robert E. Howard, and the vast number of Dungeons and Dragons tales from before many of us were even born. It’s not at all what I expected when I went into the game, but it was a welcome surprise.

The Bard’s Tale IV: Barrows Deep is a well-crafted and deep adventure. It combines different genres and mashes them together to form a fun and challenging RPG that almost anyone can enjoy. Sure, it suffers from a character creation tool that’s little more than a character select, and everyone has faces that would curdle milk, but don’t let that put you off playing this gem of a game.

A thoughtful, deep and rewarding RPG, with some great puzzles and a story that may not be groundbreaking, but sure is fun.