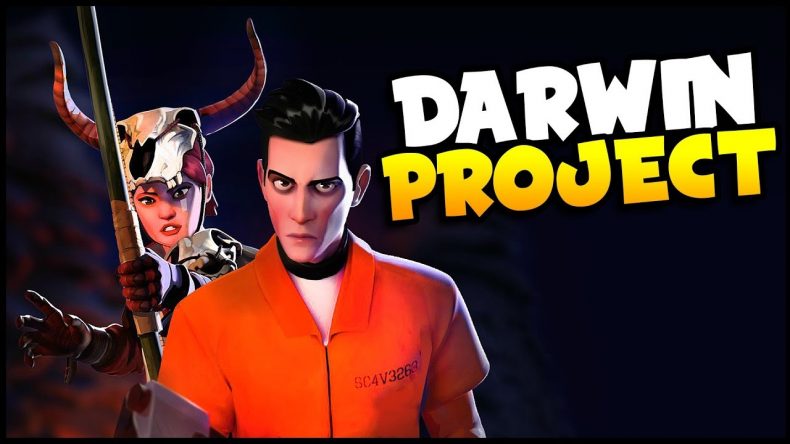 It’s difficult to be overly enthusiastic about something no one else seems to really know or care about, which is main issue with The Darwin Project. Initially I was quite stoked to play it, my enthusiasm bolstered by a colourfully off-the-wall trailer and the fairly earnest promise of a unique experience. And to be honest, for the first few games I played against bots, I found it quite enjoyable.

The Hunger Games-y premise is that you’re dropped onto an island with a bunch of other people with nothing but a bow and are told to duke it out until only one of you is left. So far so Fortnite, but the blob of chilli sauce dripped into this particular trifle is the inclusion of sub zero temperatures that force you to gather wood to build fires and stay alive. In fact you’ll also need to craft arrows for the aforementioned bow, an oddly archaic choice of weapon considering you also start the game with a personalised jetpack. You’d think anyone industrious enough to forge weapon upgrades from bits and pieces scavenged in the woods would have the wherewithal to fashion a pretty devastating weapon from the fuel and components of a compact rocket pack, but no. Bows and arrows and big hammers appear to be your lot. That’s kind of all there is to it, too. You’re thrown onto this island, which is split into hexagonal segments that systematically become uninhabitable, thus forcing all the players into a savage battle to the death in the last remaining zone. The big problem is that the map is initially quite massive and there are only 8 of you, so you’ll spend so much time wandering around alone that you might as well forget building a fire and use some of these trees to whack up a winter cabin with a hot tub and complimentary minibar.

When you do come together the weapons are quite hilariously inaccurate, which is likely a deliberate design decision. You’ll strafe around one another firing arrows at thin air for a while before pulling out the hammers and launching each other thirty feet into the air for no discernible reason other than that it looks funny. The thing is, it lacks the tension of other battle royals like Fortnite, PUBG or Apex Legends because you don’t really get stronger as you kill. In those games if you sit in a hole and wait until you’re the last but one you’re likely going to get obliterated by some sweaty 14 year old with all the best weapons, full armour or energy or whatever, and your carefully orchestrated tactic of hiding in a bush like a pansy will account for nothing. In The Darwin Project, as long as you’ve got a fire going to keep your feet warm and a few arrows you can simply wait out the whole match and then get the drop on the leader in the final area like the cowardly snake that you are.

It’s not helped by only having minimaps in buildings, where you can just sit and camp waiting for someone to come and do a bit of orienteering before ventilating their eye socket with a sharpened string-propelled twig. What I’m saying is that The Darwin Project lacks any sense of real tension or progression. Matches just kind of are, because otherwise there’d be no game at all. It doesn’t feel as tactical or clever as its genre mates, and even the various special abilities you can unlock don’t feel particularly special. Add to this the fact that I’ve struggled on many occasions to find a full lobby, and you’ve got a game already in desperate need of a shake-up. There’s just not enough hype or interest around The Darwin Project despite a decent enough set-up for a battle royale and some lovely, colourful visuals. The battle royale market is slowly filling up, and with games like Apex Legends and The Cycle attempting to do different things and the behemoth that is Fortnite continuing to chew up and spit out every other pretender to its crown, a title like The Darwin Project needs to bang its drum much, much louder to be heard above all the screams and crunching bone.

The Darwin Project is far from a bad game, and in fact has reviewed well since its early access days – there’s just not enough of it to get really excited about. In months to come it may well be fleshed out into a more fulfilling experience, but for now it’s very much struggling to be seen in an increasingly busy genre.

Not much variety
Needs more reason to play

The Darwin Project is a fun experiment with some solid ideas, but doesn't quite feel fleshed out or feature-rich enough to entirely recommend without caveat.

The Darwin Project is a battle royale with a difference

The Darwin Project announced for Xbox One