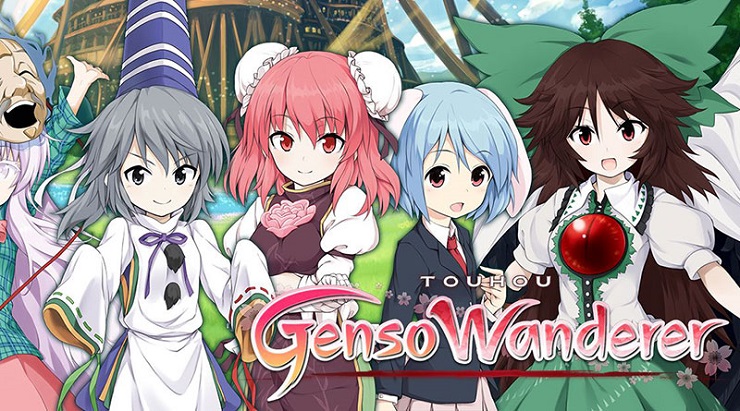 When NIS America announced that they were localizing Touhou games, I was hoping to see Gensokyo get announced and having played it, I’m glad they took a chance on it because not only is this a very competent roguelike, it is also very accessible to newcomers of the genre. You start out playing as Reimu Hakurei. She is visiting Rinnosuke at his shop, but things take a turn for the worse when the shop is replaced by a massive tower and the world  of Gensokyo is now full of clones who attack. Reimu is the shrine maiden in Hakurei Shrine and you have to bring peace back to the land. Along your journey you meet a sage in training Futo who is an invaluable asset early on and you slowly run into more Touhou girls in your journey up the tower.

There’s tons of things to keep in mind while playing a roguelike, but everything is introduced and explained really well in the tutorial section. Genso Wanderer plays like a traditional roguelike with the addition of Danmaku or Bullet Hell elements. Unlike normal JRPGs where you (well I do for sure) end up hoarding potions and elixirs until the end, you’re encouraged to use them here. In fact, survival will be difficult if you don’t use your items to restore health and fill up your “tummy”. Each step you take has enemies in the room making a move close to you or basically just going on their own business. Movement is tile based and there are a few button combinations to learn so you don’t make the wrong move and end up surrounded by enemies. Items and equipment are aplenty in dungeons and you’re encouraged to pickup everything because you never know when a spot of green tea will help you out. I like the implementation of the menu for items and equipment. Instead of pressing a button to pause the game and then going through menus, you hold triangle and press a direction on the d pad to go to either equipment, items, or even fusion. Fusion is super useful and something that you unlock early on. It lets you supercharge your equipment with items or mix multiple items to create better items. This is very handy if you’re running out of inventory space.

While this is a roguelike first and foremost, there are a lot of visual novel sections. These serve as tutorials and for story bits. You maybe tempted to just hold R1 and skip through everything to get to the dungeon sections, but I’d recommend only doing so if you are more than familiar with the mechanics. While games like Etrian Mystery Dungeon are pretty unforgiving, things are much more approachable here. When you die, you really only lose your money and a few other things. It isn’t like the old school roguelikes where you lose everything including your equipment. The opening floors are also quite easy so you can get your bearings in order as you experiment and get used to the controls. You unlock more characters and partners after completing story dungeons and arcs. Visually, I have almost no complaints and only praise for Genso Wanderer. Character models are crisp and everything is well detailed. The Touhou girls all look nice and have very good idle animations. Reimu has a very nice sleeping animation if you put the controller down and do nothing for a little while. In the dungeons, consuming items like Green Tea has a really nice animation of the character actually drinking tea with them saying “Itadakimasu” (loosely Bon appétit). The danmaku sections are also nicely animated.

My main complaint with visuals is the text boxes. There are white text boxes with white font (with black outline) making dialogue harder to read than it should be. The two HUD options are a welcome addition though. The minimal one is more suited to big screen TVs while the mini HUD looks a lot better if you play on a monitor or sit close to your TV. The map in particular always looks out of place as an overlay. The music impressed me. Not only is it really good in game, but I left the Shrine open just to listen to the soothing music while doing other stuff at home. This complements the voice acting that is also great very nicely.

Touhou Genso Wanderer is an easy recommendation for fans of roguelikes or anyone interested in the genre with an open mind. This is a much more approachable experience than the likes of Shiren or the true Mystery Dungeon Games. It surprised me in almost every way.

Touhou Genso Wanderer is a very nice and accessible rogue like that is perfect for newcomers to the genre and fun for veterans alike.