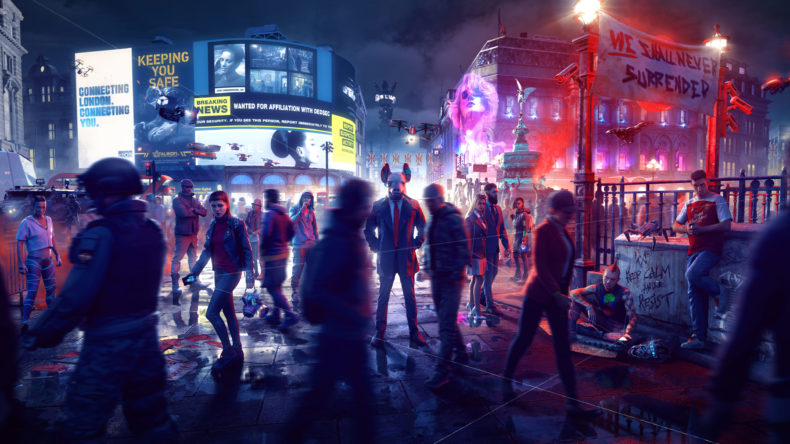 Although not the most obvious comparison, the franchise that kept popping into my head as I played Watch Dogs: Legion was The Fast & The Furious. Not because any of my characters looked at all like Natalie Emmanuel, sadly, and not because I exhibited the driving skills of Dom Toretto (I’m closer to Dastardly & Mutley, if I’m honest); but rather because of the core concept of building a close-knit “family” of ordinary people with extraordinary skills. You know how Ludacris goes from being a chop shop mechanic to a world-class hacker and super spy with apparently zero training? That’s almost every character in Watch Dogs: Legion.

The claim that you can play as anyone is almost absolutely true, with the necessary exception of a handful of villains and allies. Anyone else, though, is fair game. Even the mercenary cop who just chased you through the streets of London can be flipped and recruited if you know the right buttons to push. This mechanic is the beating heart of Legion and, while it’s not a perfect system for a few reasons that we’ll come to, it’s still an exceptionally well-executed idea and one that deserves way more credit than many people will give it. 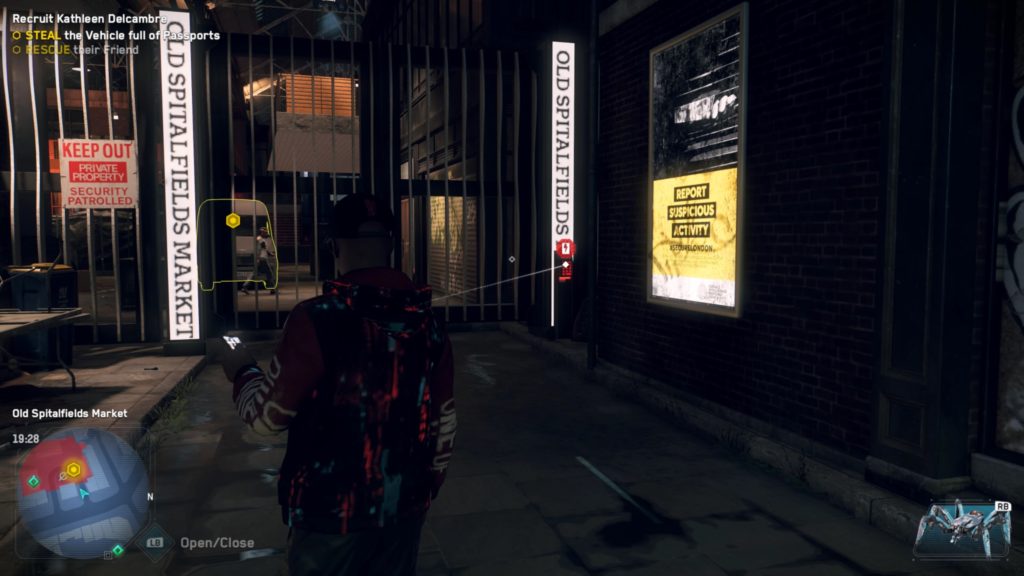 Set in the near future, Legion revisits the Watch Dogs universe sometime after the events of the last game but has relocated to the Big Smoke. The terrorist versus terrorist conflict that forms the spine of the story sees villainous anarchist group Zero Day facing off against Robin Hood outfit DedSec, as a spate of recent bombings by the former has given rise to Albion, a Private Military Company that has stepped in to enforce its own brand of totalitarian rule. Once again, Ubisoft denies any political leanings or implications in a game that literally bleeds politics. It keeps the real-world analogies to an almost parody-like level, but it’s impossible not to draw parallels to our own less-than-glowing timeline. Seeing people protesting at heritage sites, wearing face masks, generally being oppressed by a government they should be able to trust. I mean, yeah. You know what I mean.

And there are elements to Legion’s story that are incredibly dark. Seeing people begging for their lives as they’re beaten into submission by Albion enforcers is never easy to ignore, and I’ve had my Operatives arrested or hospitalised on numerous occasions for stepping in. But then, isn’t that the point? DedSec are supposed to be the good guys, after all. Watch Dogs: Legion touches on a lot of other unsavoury real-world issues, too, such as immigration and human trafficking, the drug trade, cryptocurrency scams, and organised crime. And while these issues are sensationalised simply by dint of being in a videogame, they’re not glorified. Once again, DedSec genuinely are the good guys in this world.

Which doesn’t mean you can’t recruit bad guys, of course. As you travel the streets of our sovereign capital, you can profile everyone you pass with a push of the left bumper. The information mined will tell you their name and occupation, whether they sympathise with DedSec and what kind of special skills, unique weapons, or other assets they can bring to the table. The random logic that puts these various elements together is a little crazy at times, when the friendly gynaecologist in a pinstripe suit apparently owns her own assault rifle, but by and large, these loadouts mostly make sense. And there are tons of them. People from all walks of life populate Legion’s London, and you’ll need a broad spectrum of Operatives to succeed. 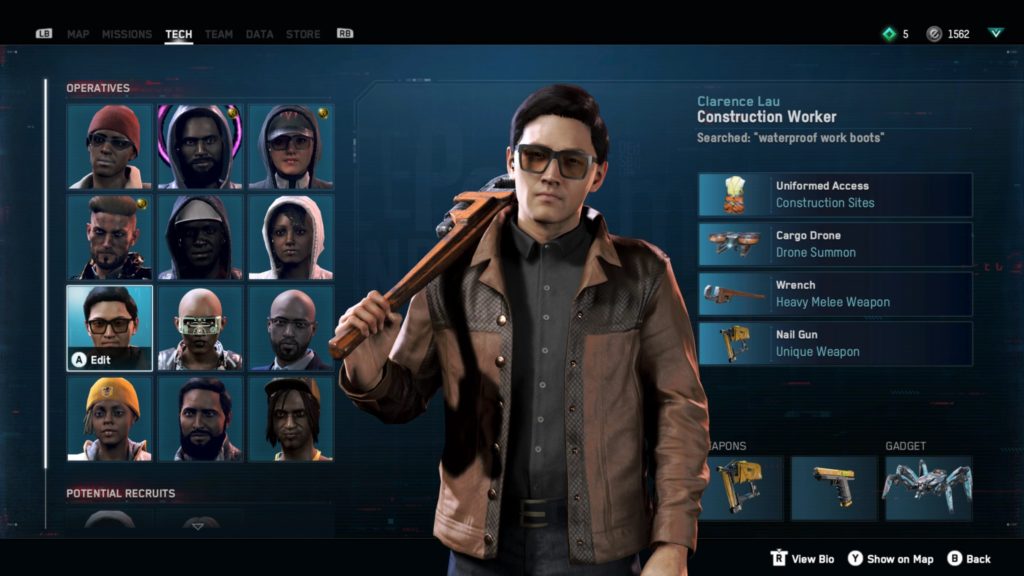 Construction workers, police, and NHS staff come with their own uniforms to sneak into certain areas; barristers and lawyers can reduce the jail time if your Operatives are arrested. Hitmen, mechanics, spies, teachers, traders, accountants, game developers, artists, celebrities… All these exist in the game along with many more, and almost all of them bring something useful. A certain tech upgrade even allows you to profile those opposed to DedSec, allowing you to investigate their habits, find their secrets and discover a way to get them on-side. It might be simply erasing a debt record from a fixed server, or it could require you to liberate an imprisoned family member. Pressing RB when profiling a person adds them to the list of potential recruits and allows you to pursue their recruitment mission. You can even turn Albion employees if you know where to poke them.

This does create a strange game world, though, one where DedSec itself is the protagonist. Ubisoft has done a good job covering the seams, but they’re there for those who want to find them. For example, most voice lines have been recorded multiple times in a vast array of accents (really, there are so many accents), but occasionally you’ll have an Operative and citizen chatting to each other with the same voice. There are also emergent moments that threaten to trip themselves up. One instance of this came about when I was preparing to recruit a Spy (and you really should; spies in Legion are star players) and I stumbled across his sister being roughed up by Albion. I rescued her, and he immediately joined us, skipping his recruitment mission. I assumed there would be unique dialogue between them so I recruited her and tested it, only to be disappointed when I reunited them and they acted like strangers. I can’t imagine the level of coding needed to create family systems and the amount of unique dialogue it would require, but it still felt like a Chekov’s Gun that no one fired. 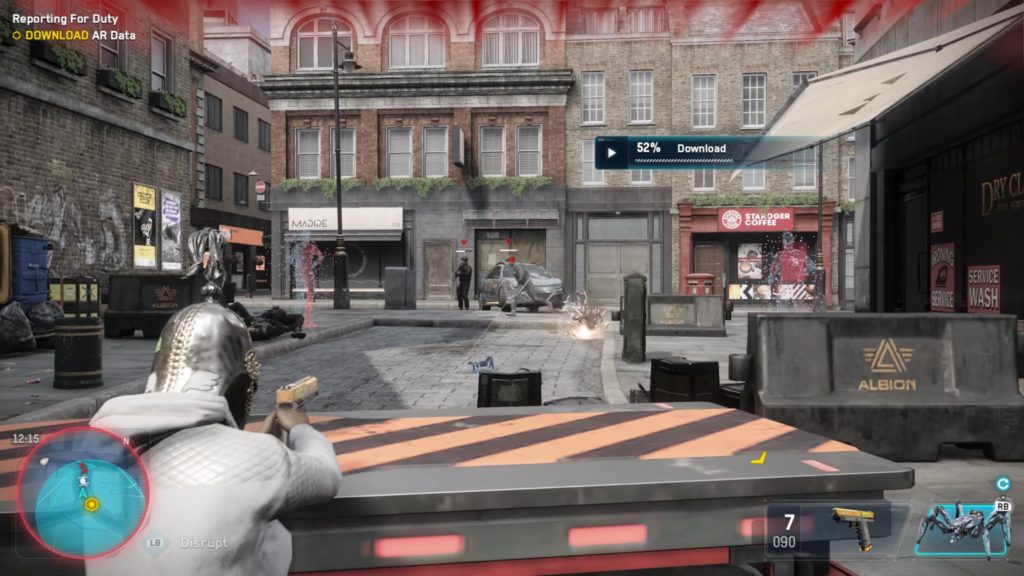 The primary objective in Watch Dogs: Legion is to liberate eight Boroughs of London by destabilising the three enemy factions: Albion, Clan Kelley, and Zero Day. You do this by destroying propaganda, pasting up protest art, freeing key members of oppressed communities, and hacking databases all over the city. The patented Ubisoft Checklist is at work, but it never felt like I was slogging through anything. You don’t need to level up your Operatives beyond finding Tech Points to unlock and upgrade gadgets and techniques, so none of the content is randomly level-gated, and every Operative has access to at least the basic levels of hacking and combat. You can switch back and forth between members of your team at any time, and there’ll be a brief changeover scene that jarringly shows both characters in their default clothing. You share the same clothes, weapons, and gadgets across your entire team.

Having the game set in such a well-realised version of London is pretty awesome, too. Being a Brit, I’ve spent many, many hours in games saving approximations of New York, Miami, LA, Chicago… It’s nice to be driving through the streets and look up to see Big Ben towering over me, the London Eye shining in the distance, or Westminster Bridge nobly fording the Thames. Not to mention the inclusion of roundabouts and red postboxes. These are things and places I have seen in real life, and it makes a difference while playing. It looks gorgeous too, built with care and detail, and I was often happy to engage Autodrive in a car and take in the sights. A host of side-concerns threaten to distract from the main plot – all Great British pastimes such as bare-knuckle boxing, playing darts, keepie-uppies in the park, and getting pissed.

If one thing really lets it down it’s the voice work. I’m all for diversity and inclusion, and like many big cities, London is a cultural melting pot, but there are so, so many accents. While some of the delivery is very good (I particularly liked some of the radio interviews and podcasts), some of it feels forced. And my god, the swearing. Us Brits are a sweary bunch, for sure, but it seems that there are very few spoken lines in Legion that don’t include an expletive or two. 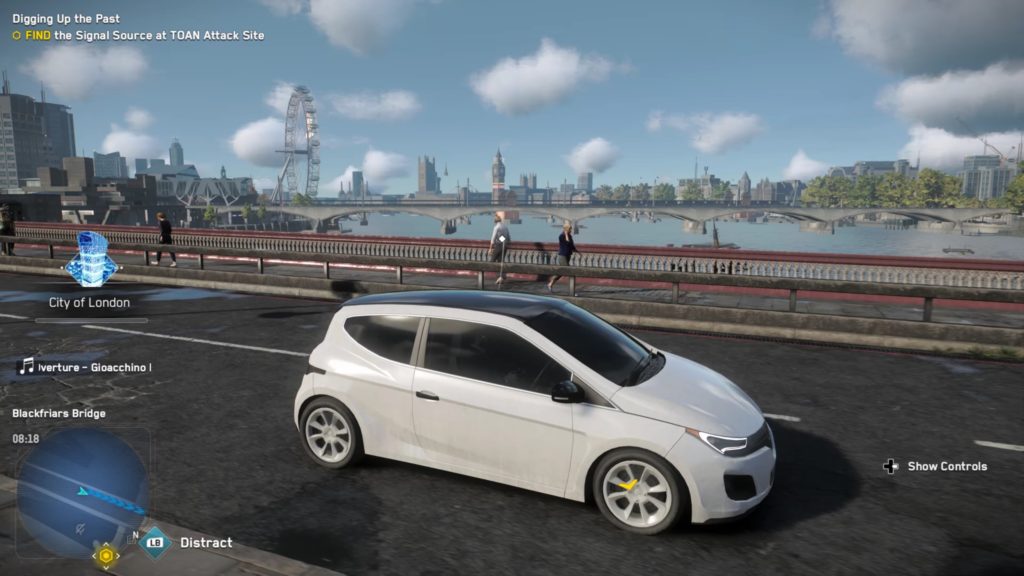 To be utterly fair, the minute-to-minute gameplay is nothing we didn’t see in the previous games, but with added Spiderbots. These little helpers are more useful than the drones you can summon, and the animation on them is stellar. Stealth is very much encouraged but difficult to maintain, though you’re rarely punished for messing up. The authorities are easy to evade at the first notoriety level, and the auto-aim is pretty forgiving if you’re going for headshots. I found the driving to be a little floaty, but on the whole most vehicles handle well enough, especially the bikes. The pedestrian AI does have a tendency to hurl itself directly into your path if you so much as bump up the curb, though, and I saw more than one high-speed chase annihilate a row of parked cars without a hint of my agency. These little moments may be put down to open-world jank, or they may be an indication of just how much is going on behind the scenes.

This being the near future, the skies above London are abuzz with drones, capturing the news, delivering parcels, or enforcing the law. Of course, these can all be hacked and either commandeered or disabled. The big cargo drones can be hacked, too, then summoned and ridden around far above the ground, allowing access to higher levels and rooftops. You can also intercept and complete deliveries for Parcel Fox, which rewards you with ETO, the cryptocurrency that has replaced Stirling in Watch Dogs’ world.

We should probably thank the debacle around Ghost Recon: Breakpoint for the fact that the monetisation in Legion is so tacked-on that it might as well not exist at all. Obviously Watch Dogs Online is yet to launch and that may change things, but right now there are hundreds of items of clothing you can buy in-game and share between your characters and, while there are Premium Operatives available as pre-order bonuses, they’re completely non-essential to success. A far cry from Breakpoint’s ridiculous storefront.

Perhaps most importantly – at least to me – is the fact that there have only been maybe two or three other games this year that I’ve enjoyed playing as much as Watch Dogs: Legion. It has its fair share of Ubisoft jank here and there, and the check-box structure will certainly cause a few eyes to roll, but the people who are likely to buy this game will already know what to expect in terms of quality and quantity, and I think even those people may be pleasantly surprised by just how good Legion is, and how much fun it is to exist in this world.

Watch Dogs: Legion suffers from a little jank in the tank, but the recruitment system is fantastic and there's just so much to see and do. The open world is full of detail, and the whole experience is full of heart.