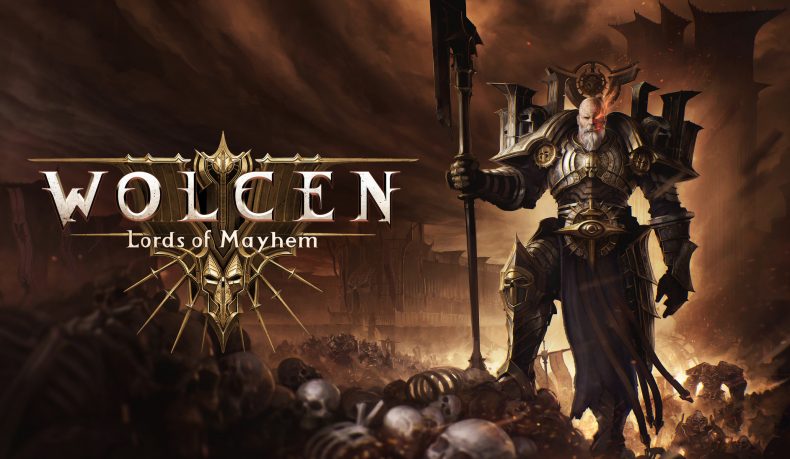 I had to look up “Wolcen” to find out what it means, as no one in the game Wolcen: Lords of Mayhem says it or is called it. As far as I can tell it mostly means clouds, or heaven. I still feel that they’ve picked a random word out of a hat, but who am I to say, right?

Either way, it has been labelled as a Diablo clone when in actuality, it’s as close to Path of Exile or, really, any other ARPG as it is to Diablo. Wolcen Studio have cherry picked mechanics, conceit and story beats from most games in the genre, but have put enough of their own personality in it to more than earn its place in the line up. It’s set in a fantasy world somewhere between Diablo’s Sanctuary and the Warhammer 40K universe, where outlandish technology mixes with magic and gargantuan shoulder armour to create an atmosphere and aesthetic that feels at once familiar and worth exploring.

The big difference in Wolcen: Lords of Mayhem is its class-less system, where your generic-looking hero can equip any weapon and thereby use the skills associated with that particular armament. So, for example, melee weapons have melee skills attached such as a leaping spear attack, a whirling axe move, or a shield charge. If you equip two melee weapons or a two-handed weapon (like a greatsword, staff or bow), you will increase your base damage in that group. However, a gun in the other hand will give you access to ranged skills, while a dagger opens up rogue skills, and a catalyst allows you to cast spells. Swap the melee weapon for a shield and you can create a ranged tank (where the pistol apes a shotgun), or a shield mage build. The options aren’t endless, but the build diversity is massive, given that each level (with a cap of 90) gives you a point to spend on a passive buff. Wolcen’s “Gate of Fates” is a sprawling network of glowing nodes that increase things like attack speed, damage, toughness, etc, but also have larger nodes that do things like add piercing damage to ranged attacks, or allow your evasive roll to carry you through enemy crowds. If it sounds confusing, that’s because it is at first, and it’s incredibly daunting to begin with, especially as each skill you equip levels up seperately and can be modified at certain thresholds to alter the damage type or fallout effect (similar to Diablo 3).

What this means is that alongside the four primary stats and which armour type you choose to wear (Heavy, Sorcerer, Rogue or Bruiser), the skills and passive improvements add up to one of the deepest and most satisfying progressions systems I’ve played with. As you can imagine, people are still experimenting with builds and there are certainly balancing issues here and there (for example, DPS still seems to be the meta), but Wolcen Studio have built a system that makes you want to try new things outside your usual comfort zone.

At around 25 hours the 3-chapter campaign is a decent size, with enough diversity in locales and enemies to stay interesting. The problem is that the difficulty spikes considerably for each end-of-chapter boss. You can call me a filthy casual, by all means, but the truth is I’m not exactly a novice at this genre and I struggled with each of them. It’s not the bosses themselves that are the problem though. Each has telegraphed attacks and tells that let you learn their patterns and react accordingly; the problem is that the game engine struggles like hell during these encounters. Sometimes you’ll see no damage coming off and will suddenly die. Other times a boss’s AoE will glitch and catch you in your invincibility frames. And when you fail, you have to begin each multi-phase fight from the first phase, and sit through all the pre-fight dialogue each time. You can skip the actual pre-rendered cutscenes, but not the chatting. It makes failure feel frustrating, when it should be something you learn from as you throw yourself back in and try to learn those attack patterns and hit-boxes.

In fact, Wolcen: Lords of Mayhem has glitches and bugs sewn throughout, in almost every area. Sometimes the Stash in town won’t close, sometimes a tooltip will stay on screen until you restart. Texture pop-in takes ages sometimes, even on a powerful PC, and I encountered a late-game bug that impeded story progress for almost half an hour as I had to repeatedly quit and reload into the game until it finally let me click on an are transition to move on. And these are just the issues they can easily fix.

Despite how much fun I had, Wolcen does have other problems. The loot economy is not good. High level bosses sometimes drop nothing but grey vendor-trash, and the majority of one-handed weapons and shields I saw seemed skewed towards helping magic-hybrid builds, which was disappointing. You can re-roll stats and gem slots on a weapon in town, but that costs you resources. There are also problems with DoT effects (damage over time) not showing on your character or on the enemy, so you don’t know if your skills have procced or if you’re taking tick-damage or direct damage. It’s frustrating, and really needs to be patched. Visual bugs abound, such as inert copies of your character appearing on the landscape, or weapons showing in cutscenes minus the characters holding them.

Multiplayer is fun enough for the most part, but because you can only be revived by another player (in solo play you have three revives before you have to return to a checkpoint and re-clear an area), boss fights are even harder. End of chapter bosses have double the health in multiplayer, and when one player dies there’s every chance you’re going to wipe and have to start again. It doesn’t help that the game can occasionally chug like an old tugboat when you have more than one player onscreen.

The endgame seems similar to Diablo 3’s, where you can accept expeditions and quests and keep increasing the difficulty for higher rewards. The big addition is the Champion of Stormfall element, which sees you rebuilding the city in a rudimentary sim, spending resources to fix the damage done during the course of the campaign, and unlock new quests, expeditions and rewards as you go. I haven’t spent enough time with it to know how long it will last, but being able to keep adding to my build and finding better loot is enough to keep me going.

Wolcen Studios have done a decent job with the story, that has a few great cutscenes and enough twists to hold your attention. It doesn’t do anything new, but it certainly doesn’t make you feel like a bystander. The voice acting is mostly decent, too, although the lip-syncing is almost always off. Sometimes characters don’t move their lips at all. The environments mostly make up for it, as Wolcen is stunning at times, whether you’re crossing a burning battlefield or traversing a grimy subterranean tunnel, and I was impressed with most of the weapon and armour designs. Some armour sets have a “chainmail bikini” problem for the female character models, though, and while I’m not usually bothered by a little bare flesh, it’d be nice if armour was at least practical. Naked midriff for the hell of it, male or female, is asking for trouble in a swordfight.

There’s more I could go on about here. Much more. I could rattle on about the unique resource system that shares a bar between Willpower (for spells) and Rage (for melee skills) and the constant trade-off betwixt, or the fact that every item you find becomes a cosmetic you can alter on your character for in-game currency (not, I stress, real-world dollar), or the fact that you can build up a kind of super-meter to unleash your Aspect of Apocalypse form and go ham on the entire screen all at once. There’s a lot to talk about in Wolcen, not all of it good, but you can’t take away from the ambition that has gone into it.

Considering it languished in early access for five years, I’d have expected the final release build of Wolcen: Lords of Mayhem to be less bug-ridden, but none of the bugs really hampered my enjoyment. It’s still a great ARPG with an astonishing level of build diversity that will only improve with expansions and patches. For fans of the genre it’s an absolute must, but I’d advise waiting for a few patches before you purchase it. The genre is a crowded one, but when something as fun and entertaining as Wolcen wants in, I’d say we can afford to make room.

The ARPG genre is a crowded one, but when something as fun and entertaining as Wolcen wants in, I'd say we can afford to make room