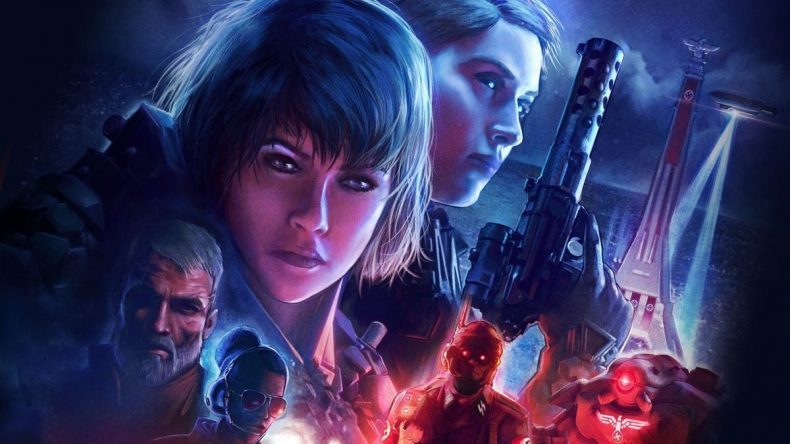 It’s not been quite two years since the last Wolfenstein game was released. Part two of a soft reboot of the classic series, The New Colossus was one of the best single player shooter games released in 2017 and even, perhaps for a few years. It was a fascinating blend of brutal gun play wrapped up in an engaging, violent and often times very funny story that took you to bizarre locations in your never-ending quest to resist the brutal regime of the Nazis. Youngblood is not a continuation of that story, rather an adjunct giving you the opportunity to smash Nazi skulls over and over within a loose narrative structure, but this time you can do it with a pal.

You play as one of the Blazkowicz twin girls, Jess or Soph. Two adolescent young woman complete with dorky one-liners and idiotic dances. It’s been roughly twenty years since the events of The New Colossus and the girls, now grown, set off to Nazi occupied Paris to find word of their father who has gone missing. It doesn’t matter which twin you choose in the beginning as both are equally adept. Soph’s starting loadout comes equipped with a cloaking device which will render her temporarily invisible and a close quarters weapon, while Jess has a long to medium range weapon and a charge ability that will knock low armoured enemies to the ground. Regardless of which twin you choose you will have plenty of opportunity to equip yourself with every weapon type, and can even unlock the alternate sister’s power ability once you have reached the required level and gained the requisite amount of unlock points. As with The New Colossus, the range of weapons at your disposal are enormously fun to use. Each feels meaty and they all dispatch Nazis in satisfying and bloody ways. The core weapons consist of a rifle, SMG-type weapon, shotgun and pistol, and along the way you can find and pick up the more experimental weapons that utilise electricity, launch grenades laced with napalm and fire face-melting lasers. Different weapons are useful against different armoured enemies so you are encouraged to mix it up constantly, and each weapon has its own upgrade tree that can be gradually upgraded as you play. To upgrade you will need to find and use silver coins which are liberally spread across the various locations you will visit. Hidden away off the main path are also resource crates, which upon opening, give you a large number of coins. Silver is your primary upgrade resource, but it can also be spent on a variety of cosmetic items including skins for your weapons and the sister’s suits. Depending on your desire to own the relatively bland cosmetics you are provided with an opportunity to purchase more of the in game currency through the addition of micro-transactions. Personally, I have yet to feel like I am struggling to find enough coins to satisfy the increasing requirements needed to purchase my next desired upgrade, which is in part due to the significant reduction in the difficulty of the game.

The New Colossus was an extremely challenging game, even on the Normal difficulty, but my experience has not been the same in Youngblood. Missions are structured around three core objectives at first, however, although you are free to attempt them whenever you wish, your chances of success are very slim. Instead you can engage in a variety of other activities to help the resistance, and level up your skills through the acquisition of experience points whilst doing so. It’s jarring at first to see familiar Nazi enemies with level numbers above their heads, but the shooting and resulting carnage is for the most part enormously satisfying. Once you feel you have honed your skills and levelled up enough, and spending points within three broad skill trees, you can tackle the main story missions which are pretty sparse, featuring similar and uninteresting boss fights that pose very little challenge to an appropriately levelled character. Mission structures all follow a similar route: go to a location, extract an item, and kill as many Nazis on the way as you can. Levels are structured with a fairly linear path, however, there are a number of different routes you can utilise to reach the same destination. Much like The New Colossus though, as much as stealth appears to be a perfectly reasonable option with crawl spaces under floors and an ability that renders you invisible, the reality is less so. The cloak of invisibility has such a short activation time that you can barely manage to dispatch one enemy before it de-cloaks and exposes you to the rest of the enemies in the room, so every encounter feels the same. Silently takedown one or two enemies then prepare to fight the rest. Fortunately, the suits you wear as Jess and Soph have increased mobility, allowing you to dart and leap around the environments spraying bullets and launching grenades with something approaching carefree abandon.

Youngblood has been built for co-operative play, and while it is perfectly possible to play the entire game on your own, it is a significantly more interesting game with a friend. The implementation of the co-op experience is pretty seamless, however, there are some significant issues with regards to enemy scaling. I joined a friend who had just started their campaign, and my level 15 Jess was slicing through the enemies like they were paper, which was disappointing. Level exploration was more interesting though and we discovered a great deal more secrets working together than I had done when I had played the level on my own. Working together is a theme that runs through the entire game, with gates that require you and your partner to open simultaneously, and a shared life and pep system that encourages you to stick together to keep each other alive. Youngblood functions well as a solo experience, however, it doesn’t rely too much on your AI sister who acts as stupidly as she seems in the cut scenes, standing in direct gun fire of enemies, de-cloaking at inopportune times, and taking entirely too long to revive you. For all the fun that can undoubtedly be had in Youngblood, it is not without some significant flaws. AI frequently gets stuck or is unresponsive; I witnessed enemies floating through buildings or larger enemies becoming rooted to the spot making them easy to pick off. There is also quite a significant audio bug that seems to occur when using the flashlight that can be used to light up dark spaces. On two occasions I had to reboot the game and restart a mission because the audio was breaking up, or in one instance disappeared entirely. For a game bearing the name of “Wolfenstein” these kind of issues are disappointing to see.

Despite my gnawing disappointment that Youngblood does not match up to its excellent predecessor I would be lying if I said I didn’t have a good time with it. The story, while signposting its twists and turns from a mile off, is daft and has some heart to it. The twins will likely be like marmite for people, some will like them, others loathe them for their often misplaced actions and repetitive voice lines. However, they most certainly are not boring protagonists which is refreshing to see. Gun pay remains excellent though, and as the objective is to gut as many Nazi’s as possible, it feels consistently good doing so. Just make sure you have a friend to help and virtually high-five you as you do.

Wolfenstein: Youngblood is a fun if slightly buggy shooter, made more interesting with the addition of a friend to help you punch Nazis to the face.