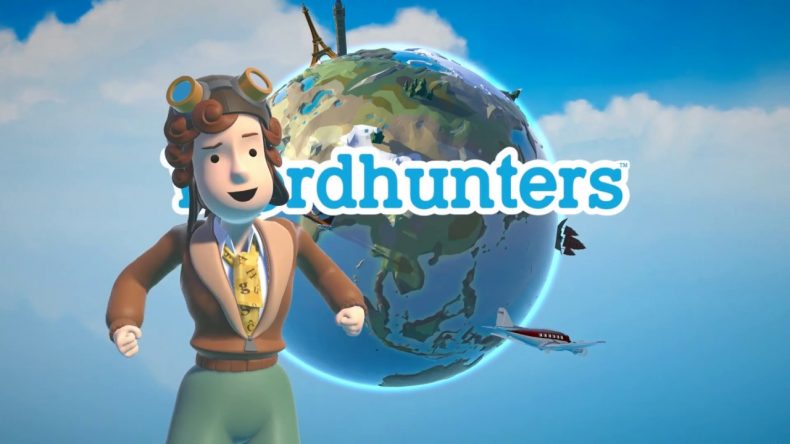 Sometimes, you just get a gut feeling that all is not well. When a game has a name that sounds like a dodgy primary school educational cartoon, or a prime-time, knock-off version of Countdown, you know it’s probably going to have problems. And not least because Rachel Riley is nowhere to be seen. Name aside, the biggest question that needs answering is can a word-related title not only work as a Playlink party game, but also be fun at the same time? The answer is no, and thus sadly, my gut feeling was right, which is one of only a few things that can be said to be right about Wordhunters at all.

For starters, the premise is pointlessly convoluted in the name of “fun”. Ultimately players are competing to be the first one to complete their unique 4-letter word. To do that you need to win letters which are rewarded as prizes for being victorious in a variety of word-related mini-games, each of which takes place in a well-known city of the world, which players can vote to visit at the beginning of a round. The twist is that victory in a mini-game rewards up to two letters towards your unique 4-letter word, but the only letters that are offered are those that make up the name of the city. So, the idea is that you want to win the mini-games that are played in a city that shares the letters that you still have to find from your unique word. Still with me? Heaven help you. And if the arbitrary winning condition sounds dull, strap in because that’s a theme that runs throughout. To be frank, Wordhunters really lacks any semblance of personality, failing at even the most basic level to add some character or fun to proceedings. As per usual with Playlink titles you take a selfie to display yourself in-game. However in other titles, this is often backed up with a choice of a character to play as, or some personalisation options which might send a rumble or laughter through the room at the start. However in Wordhunters, your selfies just appear in the window of a plane between each round as you fly to your next city destination, meaning even this usually quirky and unique aspect of the game is bland and uninspired.

There’re also cards you can play that offer bonuses to give you the upper hand, but somehow these manage to either fall flat or completely ruin the experience. Coming in three different types, the first changes the city destination to one that might better suit your unique word; the second increases the winning letters you receive from two to three, which either makes no difference if the city isn’t one you need, or completes 75% of your word in one round, dramatically shortening the overall experience; and the final card gives you a head-start in the next puzzle which, depending on the mini-game, can break the challenge completely. I happened to use it once on the anagram game, and got a few seconds head-start in each round, and had solved the puzzle before anyone else had even got the opportunity to see it. As you can imagine, I was popular at that point. But put everything else aside, what’s really important is whether the mini-games themselves play well, and how enjoyable they are. And herein lies Wordhunters’ biggest problem: the mini-games on offer are really not party game fare. For the main they consist of takes on well-known word puzzles such as a word search, anagrams or Boggle. Most games have each player tackling the same puzzle simultaneously, with the winner being crowned for either getting the highest score in a given time frame or being the first to solve a puzzle. With the latter for some stupid reason, when a player correctly solves the puzzle, their solution appears on-screen, meaning all the other players have to do is glance away from their tablets or phones and look at the TV for the answer.

There is a reason why word puzzles don’t tend to be group activities, or why Friday nights aren’t spent huddled around a wordsearch. These challenges are individual activities meant to challenge our intellect and problem-solving capabilities. We pride ourselves on taking our time to master them, improving a little over time. I’ll admit to even now still dipping into a word puzzle app on my phone every now and then to give the grey matter a bit of a stretch. In the right setting these games can be fun, but not in a group. If someone beats me at a word puzzle, I resent them for cutting my own personal challenge short, and if I win, then I get promoted to the person in the room everyone else resents. It’s a lose-lose situation for all involved, and if there is no winner, then there’s no point. There were a couple of highlights, such as the mini-game where you have to guess whether words were real or made-up, or when you tactically vote for cities to visit if you’ve figured out what unique word your opponent is trying to make, but to be honest these moments are too few and far between. More often than not, you and those around you will be left frustrated and bored with what’s on offer, and won’t mind if you lose, because at least if that happens the experience is over. I’d stick to a crossword, if I were you.

Even those who enjoy a word puzzle will find Wordhunters frustrating and dull. It lacks any spark, and should be avoided.