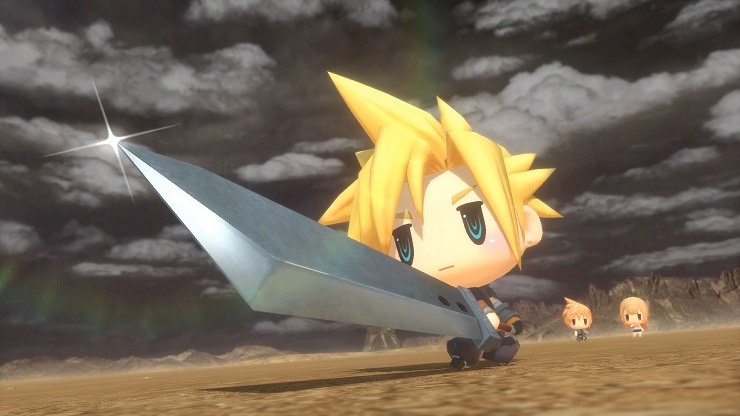 I’ve wanted a chibi style Final Fantasy game for a long time now. Since Final Fantasy IX, the super-deformed style has been ditched for a more realistic appearance for the characters (though they’re still clad in outrageously over-designed garb). World of Final Fantasy now arrives bursting with colour and complete with characters with tiny bodies and oversized heads.

Here they’re called Liliken, and our sibling protagonists Reynn and Lann are able to switch to the Liliken small form and large Jiant form at will. The Jiant forms have a certain Kingdom Hearts feel to their designs with larger hands, heads and feet, but dead emotionless eyes, while the Lilikens have no digits at the end of their extremities, but their faces are so much more expressive. Coupled with an extensive amount of voice acting that extends to pretty much all the NPCs, you’ve got a Final Fantasy game that’s dripping with more character than any since X-2.
Your intro to the game sees the main characters waking up and promptly committing suicide, before waking up again with a severe case of amnesia. After a brief interlude where Lann attends his job as a barista flouting health violations with an animal on his head, a whole swath of information is divulged to the protagonists right at the off, but the audience isn’t granted the same luxury.

This whole withholding of information happens quite frequently throughout World of Final Fantasy, which is odd considering the sheer wealth of information it does throw at you. Regularly new mechanics and items of interest will be communicated to you through screens introducing said item, but there’s always certain aspects that aren’t made clear. For instance you’re told that there are enemies that can topple your stack, but you’re not told that the damage from said attack will be lessened if you’re unstacked. Or there’s the ‘Imprisming’ system, where you catch the monsters (mirages) and convert them to your team. The mechanic is introduced through you beating down on a mirage and then capturing it. The game then proceeds to tell you that other mirages may require different tactics to get them to relinquish themselves to you, but you’re never given any examples, meaning you have to work it out on your own. Some need to be hit with critical hits, others to be healed, some of them need to be the last creature on their team, but you can gain a better chance of imprisming by repeating the action, which is impossible to do if it requires them to be the last one standing. Giving you some sort of idea, practice or heads-up would at least help you with your thinking in capturing these.

The stacking system itself is at least a rather good idea. You set up your teams as two stacks comprising a large unit on the bottom, followed by a medium one and then small. While stacked, all the attributes of the units are combined into one set, increasing power and base health. There are downsides to this though, as any weaknesses are also combined, and the stack itself is vulnerable to being toppled. Being separated isn’t the worst thing though; yes the attacks are weaker, but you gain more attacks per turn, and there are more targets for enemies to aim at.

Lann and Reynn’s different forms allow you to mix up your stack systems a bit, giving you a choice of two different stack set-ups per character for battle (one for Liliken and one for Joann). But, you’ll need to make sure you know what stack you want before a battle starts. At one point I was wandering around with both characters in their Liliken forms because I felt it was right for the story, only to abruptly end up in a fight I had no chance of winning because my stack set-ups made me weak to the enemy with no way to switch mid-battle. The game actually likes putting you up against tough enemies where your chances of winning are slim to none, which tells you why death is treated leniently here, because if your party falls you’re whisked back to the Sylver Park hub – Lann and Reynn’s home world – you don’t lose any Gil or collected experience, and you’re free to quickly hop back and try again. It’s a shame the rest of the battle system isn’t so inventive. It’s based on an ATB system crossed with Final Fantasy X’s queue, so you have a timeline where icons scroll to the top, and when one hits the top it’s that person’s turn to take action – the thing is, it’s slow, painfully so in fact. You can tell that the developers agree with this, as they’ve included a fast forward button to speed up proceedings, for longer battles there’s even the option for you to select to auto-battle, but here the characters will just repeat the last action until you tell them to stop; kind of like a car’s Cruise Control, it’ll make things easier, but whatever you do, don’t expect it to drive for you.

What the fast forward button, auto-battle system and attitude towards death feel like is that the developers realised there were problems within the game’s systems, but instead of fixing those issues they created ways to make them less stressful instead, which really is the wrong way to go about it.

World of Final Fantasy does have things going for it though. I played on PS4, and despite it showing it’s obviously a Vita port at times it does look rather lovely in places. It’s hard not to fall in love with the cute aesthetic, especially the Liliken forms of the cast from older titles like Yuna and Tifa. The writing is good too, poking fun at itself and breaking the fourth wall occasionally (although Lann’s substituting of swearing for ‘honk’ grates after a while). There’s also some interesting sidequests with you taking on problems for the friends you meet along the way (called Interventions) or battling previously fought monsters in The Colosseum, which at least make for interesting diversions from the main quest. But these things alone can’t save it from a structure that sees you push from town to town via narrow corridors, fighting random battles that come at you all too frequently, meaning you’ll spend a lot of time holding down that fast forward button to the point you’ll get cramp in your index finger. It’s a shame as I really wanted to love the game, but it’s an unpalatable grind with a sweet exterior; like a birthday cake where the filling is made of brussel sprouts.

World of Final Fantasy tries to give you the nostalgia feels, but is unable to recapture the magic of previous 'hyper-deformed' games.