by Adam Cookon January 16, 2012
Season 4 continues with a barnstormer of an episode, laughs ahoy. Gaming news and discussion galore. Listen now on GodisaGeek or via iTunes or Feedburner.

by Sean Smithon November 29, 2011
We recently reviewed the console version of Sonic Generations, part of this year's 20th anniversary celebration of our beloved spiky blue hero, but how does the Nintendo 3DS version stand up. Find out at GodisaGeek.com.
3

by Alex Wozniakon November 25, 2011
Alex Wozniak takes a look at a Week in Gaming on God is a Geek, with a round-up of the week's news, reviews, articles and more.

by Charles Le Sueuron November 22, 2011
Sonic Generations launch trailer has been released for the Nintendo 3DS.
3

by Sean Smithon November 4, 2011
Every time we get excited, we've been let down - but have SEGA finally nailed it? Read on to find out in our Sonic Generations Review. 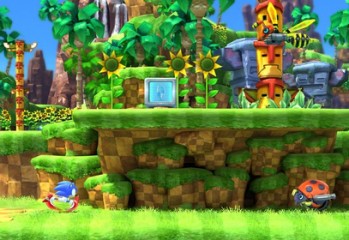 by Tony Windebankon November 2, 2011
Head's up! God is a Geek.com has a new First Look for you, and it is the highly anticipated Sonic Generations!

by Lee Garbutton October 31, 2011
Our favourite blue-hued spiny mammal is poised for a long overdue comeback next week with Sonic Generations, and SEGA have released a launch trailer to celebrate!
2

Sonic Generations to get 2nd Demo