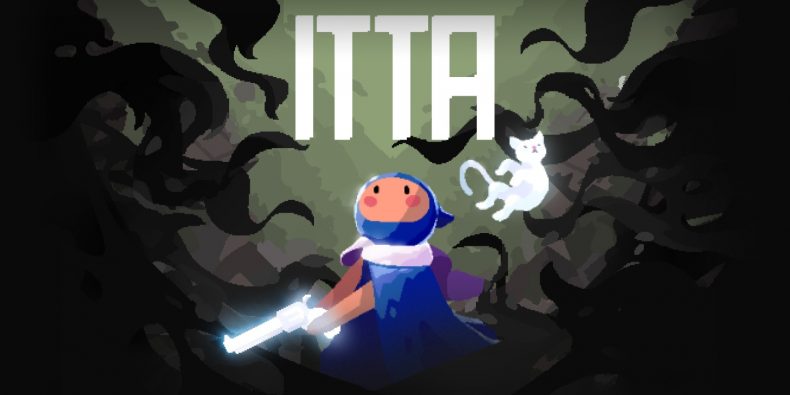 When you think of a bullet hell game, I’m guessing you’d think of something like Ikaruga. At a stretch, you might even think of Enter the Gungeon. You probably wouldn’t think of an action-adventure about death and purgatory, right? Well, that’s what ITTA is all about.

ITTA begins with our titular heroine waking up beside the remains of her dead family, in an unknown cave. What’s more, a mysterious spirit appears and takes the form of her dead cat, after rummaging around in its corpse, no less. This spirit aims to guide Itta through the unknown land in which she finds herself, even arming her with a spirit version of her late father’s revolver. It comes in handy pretty quickly. Following a trail of blood, Itta’s first quest is to find her missing mother. This leads her to a mysterious old man who, like many of the inhabitants of this strange place, speaks of it being “the time” and other seemingly nonsensical things. There’s a lot of intrigue surrounding ITTA’s plot, with many questions either left unanswered or simply left up to the player to make up their own mind. Much of the story is told through lore books scattered throughout the game, as well as some impressive environmental storytelling and the odd word from the NPCs that still linger. Even after finishing the game, I still wonder if I understood it all.

I don’t wonder whether I enjoyed it, however. I certainly did. I enjoyed wandering around this fantastical, almost ethereal world, which reminded me of games like Ico and Titan Souls. The latter also feeds into the gameplay, as ITTA is also a bit of a boss rush game. It sometimes feels at odds with the almost tranquil setting, but there is a reason why you must face the twisted souls that await you in their various arenas. Not that I’m going to tell you that reason, that would be spoiling things. There are no enemies outside of these boss encounters, so you’re forced to hone your skills during these epic battles. As I mentioned already, ITTA is a bullet hell adventure, which means that these large enemies shoot, throw, spit and spray all kinds of bullets and projectiles your way. It’s up to you to dodge the increasingly complex patterns of death that are thrown at you, all while shooting spirit bullets back using the right analogue stick (or mouse, if you fancy playing that way on PC). The thing is, although it can get incredibly hectic on-screen, it’s a surprisingly accessible affair. You can dodge through bullets and run around the patterns that arc from each boss, with movement being beautifully smooth, as you learn the attacks and forms of each enemy.

Sooner or later, however, death will find you in ITTA. This triggers cutscenes at first, with poor Itta looking down upon her own corpse, but she soon awakes outside the door to the boss room. This is a game about learning from your mistakes, as much as it is about learning the attack patterns of bosses and even learning the lore of the land, and you’ll find yourself walking straight back into the room to begin that fight again. Chances are, you’ll do that a few times for some of them, especially the ones that grow increasingly hectic as they take new forms. I can only think of one fight that felt slightly unfair, but even that was bested eventually through patience and continued attempts.

It’s also likely you will enjoy running around ITTA’s pixelated world, taking in both its faded greens and its darkness, speaking to its strange cast of characters and discovering its secrets. There are new weapons, health upgrades and maps to unearth, not to mention a few other things, and you’ll ask questions as you wander the forests, caverns and ruins of the world, trying to piece together the story. Probably thinking about it even after the credits roll.

Whether bullet hell games are your thing or not, ITTA provides a different take on the formula and offers a peaceful world to explore in between the challenging battles. Its story will intrigue and provoke thought and its characters will probably stay with you. But most of all, ITTA is a unique experience that I thoroughly enjoyed.

One or two nasty difficulty spikes

With its intriguing blend of tranquil exploration and tough, bullet hell boss fights, ITTA is a unique experience and a damn good game.