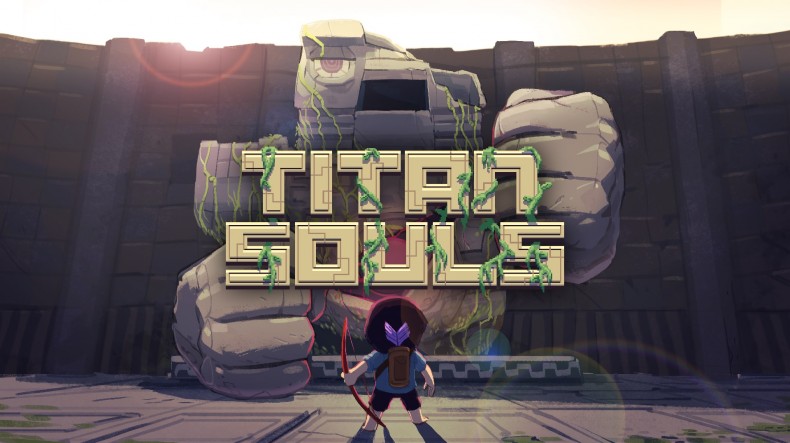 In principle, Titan Souls is a brilliant idea. A distillation of the intense difficulty and moments that the Souls series can provide, in a top down, Zelda-like world. Calming, pretty music adorns the aesthetics as you sprint and roll around, going from Titan to Titan trying to find one you can beat, in whichever order you so please. The trouble is that along the way, the fights themselves can become frustrating, and instead of feeling elation, victory is often a relief. It’s genuinely very difficult, and you’ll have to check your pride at the door.

You control a small avatar in possession of a bow with a single arrow. You can fire the arrow and use some sort of mind-powers to call it back to you, or you can just go an pick it up. There’s initially little context to the wider world, other than it being littered with stoney architecture, icy tundras, and lava-filled caverns that host large enemies. It’s a large, open (after you defeat the first four bosses, that is) map that’s largely bereft of life. There’s no health bar, though, and if anything your foe is doing hits you: you’re dead. The good thing is that your enemies have no health bar, either. The bad thing is that the first few times you encounter them, you’ll die so swiftly that you can’t learn their patterns (and thus discover the technique required to kill them) until you’ve committed to them through repeatedly facing them. Often, a Titan will have an initial form you need to hit, to reveal their weak point and then actually kill them. But, again, the fact you’ll have to encounter them so many times just to understand how to harm them, is a real downer – not least because the checkpoints can be three or four screens from the fight-room, and even sprinting isn’t all that quick. Battles can be over within seconds, meaning you’ll sometimes spend longer walking from the spawn point to the fight, than actually in combat. It’s hard to tell if this is designed to be a digital walk of shame, or just to pad the journey out – but after the tenth time, it’s a chore regardless.

Basically, the idea is a little better than the execution. Walking around to discover each battle is fine, but there’s nothing to do other than that – walk around the place – aside from a few small distractions that are required to access a new Titan enemy. It’s possible the checkpoints were designed this way so you can change your path and explore elsewhere, but it feels as though you’re being punished should you stubbornly decide that, no, this is the encounter you’re besting next.

It all works well enough, though, and some fights are easier than others, or that some do make you feel like a God. An early encounter with a mushroom-like thing (it bounces around spitting poisonous gasses at you, while causing the screen to go super-trippy) took a while, but it was a case of just keeping my cool and landing that one-shot-kill. Just afterwards, a plant like creature (that I’ve simply nicknamed “shitbag”) flails its jagged vine-arms at you. You can shoot them off (cleverly, it makes you think you’re helping yourself, but you aren’t, as they can still hurt you when dead on the ground), but the idea is to rhythmically dodge under them as they flap, so that when it pauses, you can fire your arrow into it then retract it, thus opening it up for your final shot. It’s a bastard of a fight, it really is. But then, even “shitbag” is a walk in the park compared to that absolute prick of a Knight with his fucking electric arrow. Most of these moments are superbly designed, and show an inventive mind at work that require focus and thought to conquer. Boss battles should never be boring, and so a game full of them should challenge you, forcing you to learn, then rethink your actions – just like the Souls series does. It’s such a shame that some can devolve into exhausting levels of trial and error. That said, I first played this game over a year ago, and it’s remained absolutely true to the original Ludum Dare idea, which is admirable.

There is joy to be found, here. A certain type of gamer will love it and come back for speed-runs – the very fact that your save file tells you how many deaths and bosses you’ve killed suggests it, and once you know the patterns, it’s simply a case of executing them correctly. But many will find Titan Souls simply too difficult and will probably give up before they even get out of the opening area. Coupling this factor with the length of time spent simply walking to a fight taking in the (admittedly nice) surroundings and pleasant music means that for everyone else, this could be a frustrating, off-putting experience. If you can see through all of that, there’s some riveting boss battles and rewarding, yet brutal difficulty to be enjoyed.

Way too much trial and error required.
Brutally difficult at times.
Checkpoints can irritate.

A fantastic concept that stays true to its vision, but just falls short where it matters - though will be popular with speed-runners.