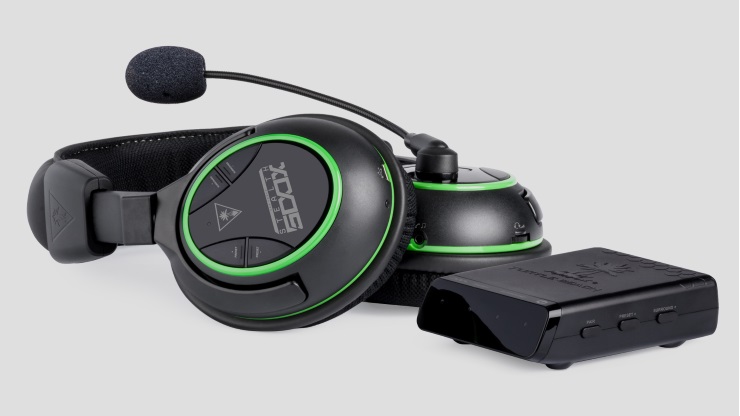 Despite it being well over a year since the release of the Xbox One, there still aren’t many high-quality gaming headsets designed exclusively around Microsoft’s mighty console. While it’s hardly what you’d call easily affordable, the Earforce Stealth 500X from Turtle Beach does have the benefit of being one of the few – which is helped no end by the fact that it’s an excellent device.

Fully wireless when used with an Xbox One, the 500X has to be paired with its transmitter, which is then plugged into the console. It comes with a variety of preset sound profiles for better feedback from different genres such as FPS or racing games. I only really dabbled with them for review purposes, because the default profile is perfectly serviceable – though it’s nice to have the options. Having only ever really used budget headsets in the past, making the move to the 500X’s full 7.1 surround sound was phenomenal. The sound balance is wonderful, with effects, music and dialogue easy to discern – and the automatic adjustment to party chat is a godsend. You’ll never have to shout down the mic to be heard as it adjusts to the volume of your voice, and likewise you’ll never have to strain to hear as chat is pin-sharp even in the midst of an online match or FPS session. I’ve had no problems whatsoever with sound clarity, even when I used the 9mm jack to connect the headset to my PS Vita and mobile phone. They still offer great sound quality, though it lacks the dynamism and diversity that you get when using them with the Xbox One.

Straight out of the box the Stealth 500X looks like an impressive bit of kit: shiny, sleek and black. The on/off switch is on the left cup above the mic jack, with volume control underneath. On the right you have the jack for the USB charger, which charges directly from the Xbox One. You can also cycle your presets and adjust the surround sound with the buttons on the right cup. The actual cans are soft and comfortable, but while the headband isn’t as snug as some designs, it’s not long before you forget you’re wearing them, mostly due to the relatively light weight.

Battery life is decent, providing several solid hours of wireless fun, and as with Venom rechargeable controller batteries, you can charge them while your Xbox One is switched off if you want to. You’ll want to upgrade the software via your PC every so often to ensure you have the best presets available, which a great service for Turtle Beach to provide. They could have sold the 500X purely as-is and it would still be solid value for the price.

The Earforce Stealth 500X is an excellent headset and while it’s likely to be eclipsed by the 800X, it’s still incredible value for money – though obviously, a little cheaper than the later model. If you’re willing to pay a little extra for a set of top-level Turtle Beach cans you know you’re getting a quality device that’s not going to let you down, and the 500X is no exception to this rule. Good-looking, well-designed, and loaded with options, the Earforce Stealth 500X is well worth investing in if you’re in the market to spend on a headset.

You can pick up your own Stealth 500X from the official Turtle Beach site.