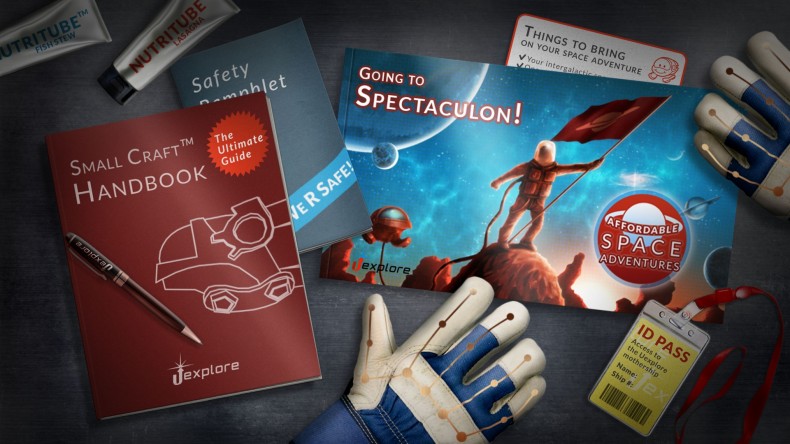 The premise is simple: you’ve booked a holiday with a space-tourism company after seeing their incredibly slick advert, who will give you a small ship and transport you to a different planet for a couple of days, all for a cheap price. It’s quite funny, and you could imagine it as a real advert for this sort of thing. Of course it all goes wrong, the transport ship crashing, leaving you to find help.

Finding that help isn’t easy, though. Controlling your ship is deceptively simple: moving with the left stick, the right directing your flashlight – but it soon gets harder. The touch-screen becomes an instrument panel, with engine levels, scanning equipment, anti-gravity generators, and more unlocking as you progress through the story, all of which can be combined in different ways. Early puzzles have you navigating basic obstacles, using your mass generator to sink in some water, or hitting switches through narrow gaps with a flare, for example. It’s when you meet enemies that Affordable Space Adventures gets really interesting, though. When you first scan an enemy, dials appear on the GamePad showing your heat, sound and electricity levels, and what level will set off the enemy. With no weapons available, you must balance your output levels to sneak past baddies, forcing you to think inventively and eke out every ounce of power in your systems, crawling past at the slowest speed or cutting your engines entirely, free-falling past but switching them back on before you plunge into a laser. Luckily when you make a mistake (and you will) the check-pointing is generous, often not far from your last position.

Puzzles slowly get harder, forcing quick actions and the very finest of manoeuvres. It’s to KnapNok’s credit that Affordable Space Adventures continues to throw new challenges at you as you go, dealing with heat, damaged systems, and multi-part puzzles as you push your craft to its very limit.

Then there’s the local co-op. Two other players can join you in your adventure, taking the role of pilot and navigator. This hands control of various systems to them, moving the actual ship and firing the flares, for example, while leaving you to manage systems on the GamePad. It changes the nature of the game. Gone is the frantic multitasking, instead it becomes about communication, discussing how to approach a puzzle or when to swap power about. There are a few flaws, however, not least the aforementioned multitasking. Needing to keep an eye on the screen as well as keeping track of what you’re pressing on the GamePad can cause a few failures (alleviated somewhat by some button shortcuts that unlock in the final third), which is frustrating, as are one or two of the puzzles that require completely new approaches to things you’ve seen before. Pacing is a little iffy as well: you’ll race through the first ten missions in less minutes, which is a decent chunk of the 38 contained here – although later on multi-part ones will have you working for a while. The constantly updating tool-set, while mixing things up, also means that it’s a fair bet you’ll be needing that function for the next few puzzles, making it easier than it needs to be.

The bulk of Affordable Space Adventures doesn’t look fantastic, either. Dark and oppressive at times, just you armed with a flashlight, the atmosphere is deliberately set against the jovial video messages from the tourist agency, but several levels towards the end show just how good-looking it can be, bright and colourful, and it feels a shame the whole package couldn’t be like this.

This really is nitpicking though. Affordable Space Adventures is exactly what the Wii U was designed for: a clever little puzzler that uses the GamePad to the best of its abilities. Arguably mapping functions to buttons could mean it could be played on PC, or on a 3DS, but something would certainly be lost in the translation. For the first time the Wii U has something truly unique, and for that reason alone means that this is well worth your time.

Best use of GamePad to date.
Constantly mixes up the puzzles.
Feels like your own mini-Enterprise.

Not the best looker.
Occasionally signposts what you’ll need next.
Multitasking can get too much.

Finally a game designed to truly showcase what the Wii U's unique feature set can do.