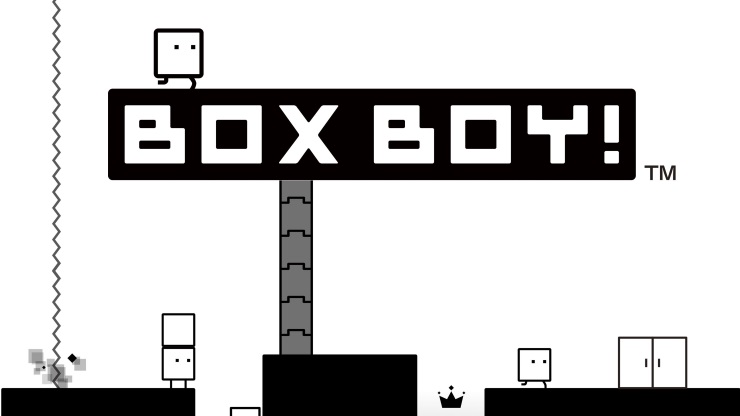 Announced during Nintendo’s last Direct show, BOXBOY! was promptly forgotten under a wave of amiibo, DLC, and game trailers. It was also released directly afterwards, which is somewhat refreshing considering the usual drip-fed way many companies like to do their business.

This is a cheap and cheerful puzzle-platformer with a monochrome aesthetic borrowed from the Game Boy days. You must navigate your four sided chap through a series of levels using his ability to create blocks, with each level having a cap on how many you can create at any one time. Once created they can be used as platforms, pathways to slither along, or to hold down switches. As you progress through each of the seventeen worlds, different mechanics come into play. You’ll see lasers, sticky pads, conveyer belts, and more – but each new element forces you to rethink how you were using an ability. To begin with, the worlds are generally themed around one mechanic at a time, with later levels seeing many of them used at once. The tight design acts as the biggest hint to the required solution. There’s normally only one way through each puzzle, so analysing the layout will often help you realise just what it is you need to do.

While you’ll be fine solving each level, there’s an inconsistency with the difficulty of them. You’ll breeze through a few only to get stuck on one for ages only to then stroll through the next with barely a thought. Getting stuck is something HAL have taken into consideration. Each level is broken down into segments with quick taps of both the L and R buttons granting quick retries if you’ve messed up your block placement. You can also purchase hints with play coins. These take the form of flashes of the shapes you need to create in order to get past the segment you’re currently on, and while these are generally useful, figuring out how exactly to make the shape helpful is down to you. Completing each level grants you medals to spend in the shop. These medals can be used in the shop to purchase music, technique books, costumes, and extra challenge levels. In each level there are crowns, and collecting these is the ticket to perfect completion which sees your end of level medal reward increased. Some of these are quite tough to get due to the level block restrictions imposed. Use all your blocks before you collect them all and you will lose the opportunity to grab it/them. However, acquire them all and the level block restriction is then lifted, meaning you then have free reign to tackle the level without worry. You’re on your own here, as the hints only show you how to get through the level, they don’t show you how to obtain the crowns. After the main mode has been completed there are the challenge levels which you can purchase from the shop as mentioned earlier and five bonus worlds, so there’s plenty of content for the money you spend.

The severe difficulty swings don’t detract from what is a decent puzzle game that doesn’t overstay its welcome, and it all adds up to some simple, old fashioned fun. It won’t take you long to finish, but it’ll keep you entertained for the whole time, and for the cost it’s difficult not to recommend it.

A decent puzzle game that doesn't overstay its welcome. For the price, it's highly recommended.