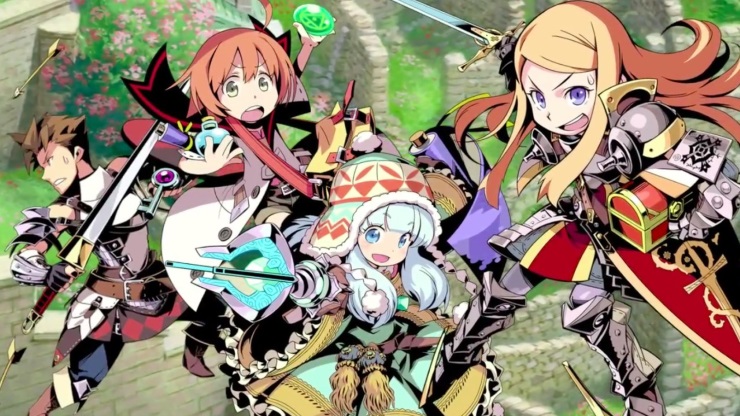 It’s a roguelike game that demands your complete attention during gameplay, and veteran fans of Etrian Odyssey might feel lost at first given the drastic change in gameplay. But they will quickly warm up to it, just like how Persona Q feels like a Persona game, this feels like an Etrian game and not just a superficial coat of paint to a Mystery Dungeon game. A considerable amount of your time will be spent in dungeons. Complete a dungeon, leave, sell items for money or store them, upgrade equipment, do side quests, and repeat. Dungeon layouts and enemy placements keep changing, and this will probably throw you off at first given the non traditional setting. There’s no map-making or first-person navigation here. There are various things you have to keep in mind while walking through rooms, such as hidden traps or coloured tiles and item boxes. The amber tiles that are usually found in groups of many restore technique points (TP) and food points (FP). You need to keep an eye on your FP gauge so you don’t end up losing health with an empty food gauge. The red tiles let you spread out your party in various formations. Spending time in previous dungeons after clearing them helps you get your bearings right, in case you thought you got lucky in a boss fight or a room filled with enemies.

The controls take a bit of getting used to. Movement is tile based and you can control a party of four for the most part. Etrian’s class system and skill tree are available for your party members, and you unlock more classes as the game progresses, including Mystery Dungeon ones like the Wanderer class. I spent some time redoing early labyrinths just to get a feel of the other classes. Etrian’s team synergy is a huge part of the charm here. Figuring out the perfect combination of classes for dungeon crawling is essential. You control the party leader that can be changed at any time, and the AI controls the other party members during combat as well. The leader can be commanded directly by you, and switching the leader during gameplay will get you out of some tight situations. But you have to learn from your mistakes because there’s no guide to help you through the game. The random element adds to the fun and difficulty: get ready to die a lot and maybe even pad your walls so your 3DS doesn’t break when you fling it out of frustration. You can’t just grind for a few hours and go fight the same enemy as if you’re prepared for them, because there may be another one (or five) in its place the next time you visit the dungeon.

It’s all about learning how to handle situations on the fly. Death is not permanent (use Ariadne Thread to exit the dungeon safely) but you do lose your items – and that really stings. Luckily there’s an inn that allows you to store and withdraw items at your leisure outside of dungeons. Throwing items at enemies is something else you can do to free up space, but please don’t throw a potion at enemies by mistake, as some will throw items back to you. Enemies are varied, and if you see an angry face for an enemy status, channel your inner Usain Bolt to run, because you’re going to have a bad time. Complacency and laziness is punished. Here, your attention is demanded at all times. I kept spamming attacks in an area with four familiar enemies and didn’t notice the enraged icon until it one-hit-killed everyone in my party. Dungeons get harder and deeper as the game progresses.

Unlike in Persona Q with FOEs (the large visible enemies on the map) which could be ignored early on, DOEs here need to be dealt with quickly. They will destroy your town if they reach the top of the labyrinth, and this will be very expensive for you. DOEs can also summon other enemies from that zone to the battle, so you better deal with the other enemies before attempting to take down a DOE. To take them on, you need to inflict them with status ailments and binds to have any effect. Without these, you will be doing a single point of damage only. Keep this in mind as you form your party. Hexers in are great overall, and really help here.

There’s a fort system that lets you freeze the layout of a dungeon. Build a fort on a staircase to make sure the layout doesn’t change. DOEs will attack a fort and not your town if there’s one in place, and trust me, it’s better having a fort destroyed than something in your town. You spend money on upgrading your town hubs or equipment so it is best to let a DOE destroy a fort instead of something in your town. Each dungeon has a boss on the final floor which you’ll be notified of when you try to approach the final floor. Boss fights are quite different to the normal enemy fights as you switch between characters automatically and control them in turn-based combat. The boss music is fantastic and the fights really get your adrenaline going. I’ve lost count of how many boss fights ended with my team barely surviving.

The art style is very bright and radiant. Floor layouts and enemies all look vibrant on the 3DS screen. I found it a little weird seeing 3D models for Etrian classes, though, and I’m disappointed that the Hexer’s model doesn’t have arms tied as in the portrait. The menu and interface elements all look great. Yuzo Koshiro’s work on the music is amazing, here, using some arrangements of classics like the Etrian Odyssey III boss theme as well as original compositions.

My only major complaint is the single save slot. I know it requires me to leave my traditional JRPG thinking behind (being a roguelike) but I wish there was a way to restore a previous save when you die and not suffer the penalty of losing items each time. The tutorial doesn’t do a good job of explaining many things to you, so your best bet is to play around with all the controls during combat and exploration to get the most out of it. The lack of voice acting is also annoying. After Etrian Odyssey Untold, I expected voice acting here.

After a difficult beginning, things just click. Etrian Mystery Dungeon is an absolute joy, albeit a frustrating one in some places. There’s a good amount of post game content with more dungeons, but the story isn’t that gripping. Play it for the gameplay and labyrinths. If you’re an Etrian fan, this game is a no brainer. Spend a bit of time understanding the new gameplay and you’ll have an absolute blast.

Single save slot.
No voice acting.
Story is just okay.

A beautiful marriage of the Mystery Dungeon and Etrian Odyssey franchises resulting in a brilliant and fun game.