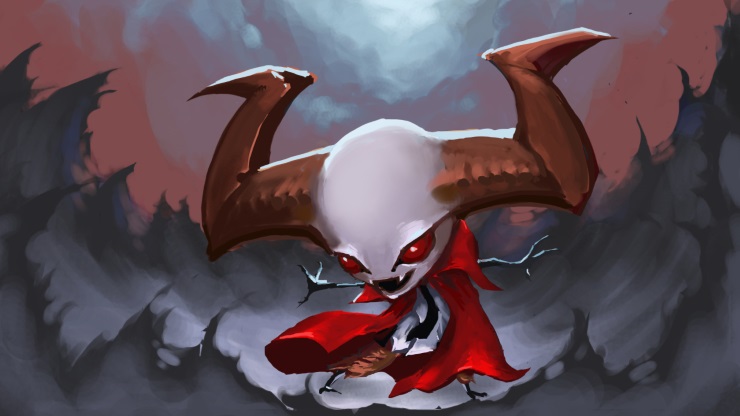 Games of astonishing difficulty seem all the rage nowadays. The punishment of repeated death appears to appeal to gamers, the sting of defeat being the main driving force behind continuing on. Rack N Ruin contains the aforementioned difficulty level in abundance, but lacks the ability to turn this frustration into a fire which urges players on with a burning sense of determination.

It follows the eponymous character Rack, a tiny demon lord capable of elemental magic who also plays the role of servant to the omnipotent lord of darkness, Ruin. Tasked with turning an ever-green world of light and wildlife into a plagued sphere of darkness and death, Rack must travel around the world transforming each region from light into darkness or risk being banished for eternity.

The main feeling I had while playing Rack N Ruin is defeat. Starting off easy with some simple tutorials to get you into the swing of things, the difficulty completely sky-rockets as soon as the first region is brought into the darkness: enemies become tougher, uglier, and more evasive. It was a struggle to progress as checkpoints are few and far between with progress only being saved when you transform a region. The distances feel even further apart when enemies are so quick to strike you down after completing sections, causing you to re-do whole regions in some cases. Rack N Ruin is a text-heavy game, with plenty of dialogue and little of the story to be left to the imagination. Conversations between Rack and NPC’s seem aimless and dragged out. I (a person who enjoys a good story-driven game) found myself skipping through entire scenes of speech completely) which adds on to the frustration. Despite this, the writing is witty and humorous even if the game is saturated head-to-toe in text.

Hand-holding is something we expect so much of in games, especially in the beginning, but here it’s virtually non-existent. Controls are left ambiguous, only being discovered to their full potential through experimentation, and even then the mapping is confusing and takes a lot of getting used to. Descriptions of items you pick up in the world are scarce, too, which may be to some people’s tasting if they desire a more exploratory title, but this becomes irksome.

Difficulty spikes in the AI feel mismatched with the leveling up of Rack, starting off with a fireball skills that consumes no magic power whatsoever, then eventually getting an even weaker chain lightning spell which drains the entire bar in three casts. This leads to new spells almost feeling like a downgrade and not worth the trade-in. Plot signposts on where to go next or the ability to check your current objective are non-existent, so this can cause even more frustration when you’re being killed ten times a minute and still don’t have a clue where to go. The art style is successful and pairs well with the humorous and non-serious tone of the game, the transitions between light to dark being well thought out and are reminiscent of titles like A Link Between Worlds. The music, following the theme of rock-and-roll, is also enjoyable but is nothing spectacular, only managing to fit in the with the game’s visage but doing nothing more.

Rack N Ruin blends a lot of elements together, adding frustration by the bucket load. Through the smog of rage and ambiguity, there are things to enjoy, but they’re almost completely expunged by the finicky controls, absurd difficult spikes, and confusing design. Although not a complete failure of a top-down shooter, Rack N Ruin misses an opportunity to innovate and ultimately fails to be a memorable experience.

Laced with punishing difficulty spikes that put off rather than urge on, Rack N Ruin falls short with an array of irksome gameplay elements and lack of innovation.