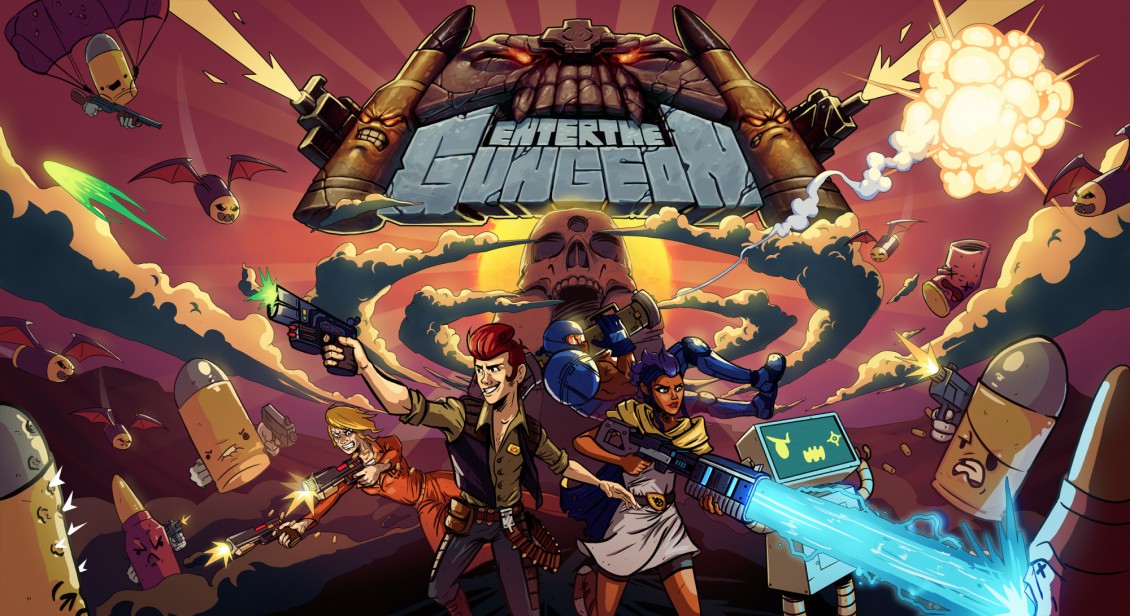 I am shite at games.

It’s something I find quite annoying as at 19, I should be in the prime of my game playing ability. This is the time of my life in which my reactions should be the quickest they’ll ever be, my awareness should be at its most sensitive and my ability to kill fools and score goals should be at its peak. I should be at my apex. The best I will ever be. In fact, I probably am and that is a right scary thought. Despite this, I’m shite at games and Enter the Gungeon is no different.

I am very bad at this game. So bad that this review is coming a couple of days after the deadline. So bad that I’ve actually only managed to get past the first area twice. But that doesn’t mean I’m not having a great time. If anything, its difficult is actually what’s driving me on–willing me to continue to fight and improve. Enter the Gungeon isn’t anything particularly new or groundbreaking; it’s another entry into the lovely pixel art, top-down, twin-stick, rogue-like dungeon shooter genre that has been ever growing in recent years, but everything it does it does really, really well. It has everything you could possible want from a game like this: a deluge of different items, loads of colourful enemies that vary in appearance and how they try to kill you, precise and smooth movement and shooting, different classes to toy with and a countless variety of weapons.

The sheer amount of wacky and different guns that Enter the Gungeon offers is certainly one of its top selling points. Every time a new weapon is found or bought it’s a real excitement to see how much damage it deals, but that’s not what kept me playing despite being awful. No, what kept me playing was the excitement of, er, playing. When you enter one of the randomly generated rooms, you’re entering it for the first time with no idea what lies upon the other side. It’s tense. So when you walk through the darkness and into the room brimming with baddies, which all turn in your direction and open fire, it’s an adrenaline rush. Then you have to kill them all; running around into cover, rolling through bullets and getting up a table to use as cover just in time to avoid death. It’s thrilling. Not to mention blasting them all to bits.

Enter The Gungeon is has a similar set up to games like Spelunky: you enter then have to fight your way through until you find the exit to reach the next level. However, Enter the Gungeon differs in the sense that you have to kill a boss before you can descend further into the catacomb. This is where I found my troubles. Getting to the boss fight was never that difficult, it was just killing it. It took ages and God knows how many attempts to beat one, but the relief and joy when I finally managed to was tangible. I could see the progress that I had made, and had made all on my own through sheer determination. When the big seagull with a Gatling gun (known as Gatling Gull) finally fell, I let out a cheer and genuinely punched the air. It made me understand why people like Souls games. What makes it testing is that when you die, you’re dead. Any items or guns you acquired are stripped away and you’re kicked straight back to the beginning. You’ll have to return to the very first area and fight your way back through to get to where you were. That’s why I don’t think Enter the Gungeon is hard per se, but harsh. It punishes you, especially me, for stupid mistakes and is completely unforgiving. You learn the hard way, and learn quickly too. It soon becomes apparent when it’s best to use your gun with infinite ammo, when to use better ammo-capped weapons, how many hits each enemy takes to go down, how to deal with different enemies and so on.

A lot of potential success can be decided by chance, however. Even though, as I said, the whole game is a learning curve, it does feel like your ability to progress and beat that boss does come down to how kind the randomly generated level is. Did you get a powerful weapon? Where you able to replenish all your health? Where the rooms easy? Did the store have good stock? All of these questions can significantly change the outcome of your run.

A big part of what makes it so easy to learn is that restarts are almost instant. When you die and the pretty book comes up to tell you how you did, pressing cross will instantly throw you back into the action. Even pressing the triangle button as the game loads lets you skip the menu screen and jump straight in. It’s something that’s understated but being able to immediately restart to try and rectify your mistakes and put your lessons into practise is a vital aspect of games like this. There are some negative aspects, however. Maybe I’m just being a wuss about it but I do think the difficulty curve from the first dungeon and the first boss fight is very steep, and it could put a certain number of players off ever beating it. In the different rooms there tends to be loads of barrels, books and others thing you can destroy and open, but doing so is pointless as they never yield anything at all, which is a bit disappointing when random item drops could be so beneficial. One final thing, when you kill a boss it doesn’t stay dead: you could find your self facing it again at some point, which I found kind of undermined my previous celebrations.

Despite these minor complaints, Enter the Gungeon is a whole lot of fun, even for someone who often screamed “No!” at the screen upon another death. Even though it doesn’t offer anything brand new, everything is executed brilliantly well. It’s slick, smooth and bombastic to play with a deluge of weapons and randomly generated weapons to keep things interesting, and the feeling of success when a boss is finally brought down is wonderful.

Enter the Gungeon is slick, smooth and bombastic to play with a deluge of weapons and randomly generated weapons to keep things interesting. While it doesn’t bring anything brand new to the genre, it's still a nail-biting thrill ride of a game worthy of high praise.