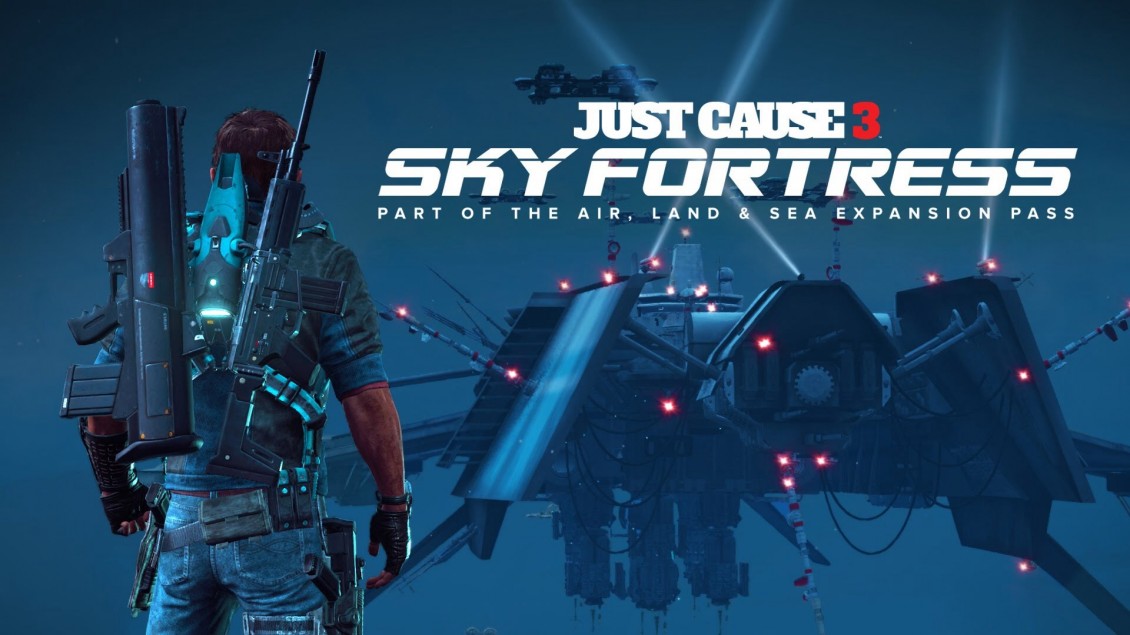 There is something to be applauded in the unabashed gaming purity that Just Cause has brought to the table so far in its three iterations. It has never been about being overly concerned with the convoluted story or character arcs or development of its plot. It leaves that to those games that want to take themselves too seriously. It has always concentrated on one thing and one thing alone. Blowing stuff up in a fun and chaotic manner. The Sky Fortress DLC it takes it to the next level, offering its own altitude sickness inducing carnage.

The plot is of course laugh out loud nonsense, something which you would almost take from an 80s action movie on overdrive. It is close to Far Cry’s Blood Dragon in terms of any excuse to include cool things for you to destroy and shoot, but this should not take away from the fact that Sky Fortress has managed to achieve one of the holy grails of DLC. It does not only offer additional content for those who have liberated Medici but introduces a new method to tackle the game from the beginning with a different set of skills, through the use of the jet powered wingsuit. It is a brilliant decision that Avalanche have decided to give you access to the DLC from so early on in the main story. Roughly one hours play from the start will see you taking on the first of the new enemies from Eden, the evil corporation intent in mining Medici for its precious source of Bavarium, before you are jetting of into the skies to face something that would find a fitting home within the Marvel universe.

You are not transformed into the ultimate flying weapon as soon as you take to the skies, the wingsuit has limited boost power and is extremely frustrating at times to get used to. You’ll no doubt have your own fair share of crashes and near misses as you get to grips with intermittently using the jet and steering and sometimes you’ll feel the camera can be a slow hindrance as opposed to a gun buddy showing you the way.

Learning will be through face planting and swearing a lot of the time, but once it clicks, you start to be able to barrel roll and skim the surface of the carrier like a pro. Luckily Avalanche have decided to give you a Bavarium powered automatic rifle on your wing suit, as well as rockets that can lock onto targets as you try to liberate the carrier. You’ll not have to worry about running out of ammo as the gun recharges automatically, but you’ll need to keep any eye on the gauges to make sure you have enough as you work through the assault runs on the target list you’ve been given. This is in many ways the core gameplay you’ve been used to so far in Just Cause 3, except that you’re not blowing up fuel tanks and helicopters, but Bavarium batteries and drones––clearing out the area for occupation by allied forces who will then move in once you’ve made the area safe. Only after that is accomplished, and it will take a couple of hours at least, will you face the weakest part of the content where the action is more pedestrian and ultimately disappointing.

I wasn’t expecting the ending that Avalanche had in mind, as it completely negates what comes before and almost feels if they were struggling on how end the level. You almost wish for a Death Star type attack run in its place to be honest as it would have fit in more suitably with the theme. It is easily forgiven, as I defy anyone not to spend a vast majority of their wing time simply flying through the superstructure as if they were in Star Wars or Independence Day with a grin on their face, it really is so much fun.

As with other areas, completion offers the chances for time trials and an unlockable survival mode where you’ll learn even more about the nuances of the suit. Sounds and graphics have a slightly more futuristic lilt, as gunfire is exchanged for laser blasts and both the vehicles and the soldiers you face will be more sci-fi than the local Medici grunts. Ingame cutscenes have also been reduced to simplified single screens with very basic animation, which was what reminded me of Blood Dragon in the first place. I can only assume this was down to some kind of time restraint on Avalanches part, though it does allow for you to tell if what you are playing is part of the DLC. It is not a complaint, merely an observation and doesn’t detract from what you are being presented with. Possibly the biggest issue with Sky Fortress is its timing. For those who have had their fill of Medici after the first two months of release and are only wanting to suit up and go Bavarium daft, then they may feel slightly cheated due to the longevity of the new content. Once the fortress is captured, there are no reset buttons to play it again without starting a completely new game.

However, those who decide to take on a dictatorship while strapped into Bavarium powered wings of hell are likely to experience Just Cause 3 in a completely new way. One that opens up all manner of additional possibilities for blowing shit up.In that situation, Sky Fortress becomes a bit of a game changer and will be worth every penny.

Endgame is disappointing
Learning to fly can be occasionally frustrating

Sky Fortress takes Just Cause 3 in a completely new direction and opens up new gameplay possibilities for those who want to liberate Medici once again.

New Mad Max Trailer Released
Evil West | 6 Tips to get you started
Pokemon Scarlet and Violet Legendaries | How to find and unlock Legendary Pokemon
The Devil in Me | How to keep everyone alive
The Devil in Me | How to kill everyone
Escape Academy: Escape from Anti-Escape Island Complete Walkthrough
Escape Academy Take to the Skies Walkthrough
Social Media
SUBSCRIBE
All content copyright GodisaGeek.com
Fonts by Google Fonts. Icons by Fontello. Full Credits here »
Posting....