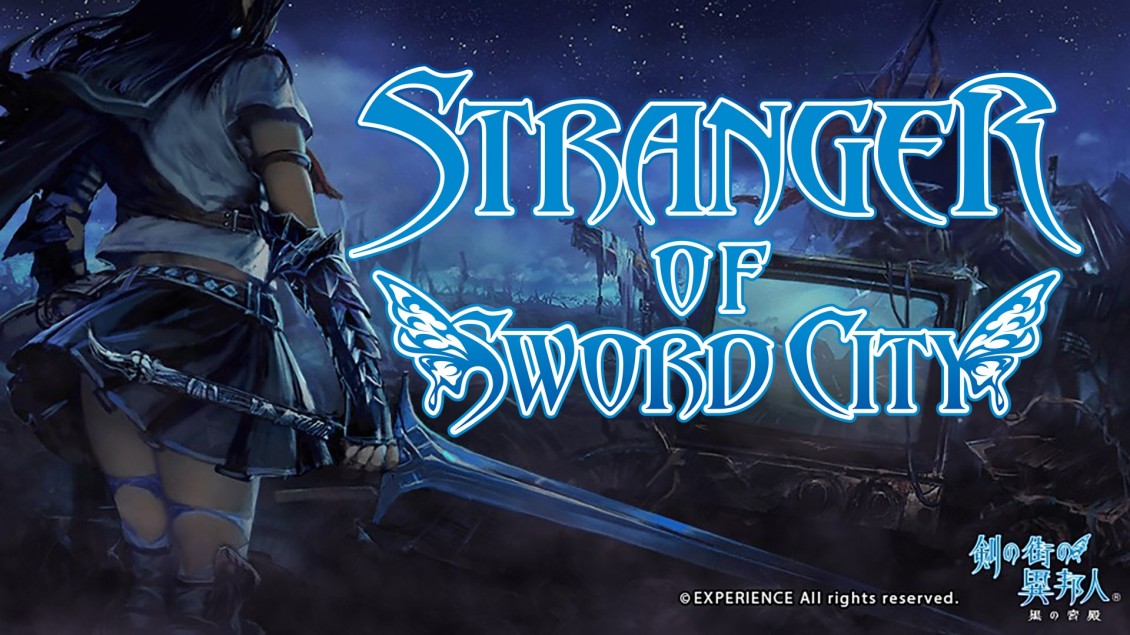 The first person dungeon crawler genre has really found its stride on handheld consoles with franchises like Etrian Odyssey being a huge success on the 3DS. On the Vita side of things, Experience Inc. has released some of my favourite games in the genre such as Demon Gaze, and is back with its latest offering, Stranger of Sword City. Experience Inc. has improved in a lot of ways and made Sword City a lot more approachable but some annoying design choices hold it back from being my favourite in the genre.

After your plane vanishes in the Pacific Ocean en route to an unnamed destination, you wake up in dark ruins. A chest nearby provides you with some rags to cover yourself with. A nameless elder finds you and brings you up to speed with what has happened to some extent, before informing you that you are a Stranger. Things heat up fairly quickly, with you being rescued from the clutches of a giant wyvern by a Vessel. Riu is her name and she tells you about the Stranger’s Guild. Your aim is to try and find a way back to the real world from this strange land full of labyrinths and factions.

There’s too much information thrown at you in the beginning and a lot of it only makes sense hours later. You will spend a lot of time in dungeons (as is expected from the genre) and exploration is first-person and grid-based. After finishing the tutorial area and getting introduced to the major characters, it becomes evident that a lot of grinding and luck-based scenarios will decide how you fare in Escario, the Sword City. As a Stranger, your talent lets you extract Blood Crystals from certain monsters. These monsters are called Lineage Types and are essentially bosses that have infinite lives and can only be finished off by a Stranger who extracts Blood Crystals. These Blood Crystals let you acquire special skills and progress the story. You can offer them to one of the three Vessels representing the factions, affecting how things will play out in terms of both story and the Divinity skills you receive. These skills are very useful during battles and will be your saviour during tough battles. Combat in dungeons is turn-based and Sword City will feel right at home if you enjoyed Demon Gaze by the same developer. There are three characters in the front row and three at the back. The tweaks to combat flow to speed up things and repeat actions are appreciated. In fact, Experience Inc. has done some really nice things to make progression faster while exploring dungeons or treading through a previously explored location. Battles are random, but will also occur when you make contact with locations on the map marked with an enemy symbol.

Once you’ve met the three factions in the city and have a full party set up, Stranger of Sword City opens up allowing you to explore multiple labyrinths at the same time in search of Lineage Types. Some labyrinths are much harder overall but even the early dungeons have some enemies that hit hard enough to wipe out party members in a single hit. The penalty for death is massive and the permadeath system in place will make even some of the most fervent fans of the genre turn away. When a party member dies, their life points or LP is reduced. Once the LP is reduced to 0, they are gone forever. LP is reduced over time and you can get party members resurrected for a large fee if needed. A character’s LP is dependant on their age, a mechanic I did not really care for this and found myself reloading a previous save instead of wasting in game time exploring while waiting for party members to gain back life points. This life point system no doubt exists to encourage you to keep a backup set of party members but when you’ve spent time and effort changing classes and crafting your perfect fighter, losing them is painful.

Dungeon design is appealing in both mechanical and visual aspects. Each dungeon has its own mood set by the music, trap tiles, layout, and enemies as well as a gathering or hiding spot that you can use to ambush transport enemies that carry chests. This is a risk and reward system, because you leave yourself open to being ambushed in return by doing this. The reward is usually a lineage type you need to slay or nice loot. If you haven’t already guessed, there will be a fair bit of grinding involved for raising your level, getting better gear, or to make certain enemies appear. Swarms of butterflies that appear in dungeons let you warp back to town once or reward you with an item if you attack. There is a magic stone in the depths of the dungeons that is a permanent warp point for you to use as well but reaching there is quite the task in the latter dungeons of Sword City. While Experience made some nice tweaks to combat that let you quickly repeat previous actions and skip animations on the fly, they went a few steps backward in the terms of saving mechanics. You can only save in the Stranger’s Guild and not in a dungeon. Levelling up also has to be done manually. While most games will indicate a level up and ask you to allocate a stat point, Sword City requires you to manually go into your party and level up a character and allocate a stat.

One of the aspects that deters some people from first person dungeon crawlers is the fan service and anime style. I’ve long enjoyed this style, never having had an issue but Stranger of Sword City has two art styles you can switch between for NPCs which are both great. I played through with the original art style by Yoko Tsukamoto because I felt it suited the darker tone and the enemy design more than Oxijiyen’s anime style. Speaking of enemy design, the bosses and the character portraits are a joy to see. For a game that doesn’t have too much visual flash, seeing detailed character portraits and enemies is a huge positive.

On the audio side of things, Naoaki Jimbo composed the soundtrack and just like in Demon Gaze, there’s vocaloid music here––including some of the battle music. I came away very pleased with the music in Stranger of Sword City even though some of it might be a bit repetitive for those who aren’t fans, or are unused to the dulcet tones of of vocaloids.

Stranger of Sword City does a lot of things right, but suffers from some irksome design choices. Being able to jump directly to another labyrinth if you aren’t having luck farming a lineage type is a huge step forward, and the ability to speed through enemy battles with the combat tweaks make it even more enjoyable. The permadeath and save system will make even the beginner difficulty feel cumbersome to newcomers to the genre. For them, Etrian Odyssey Untold is a better starting point. Veterans of the genre however, will find a lot to love in Stranger of Sword City.

You can support us by purchasing via the following links:

Stranger of Sword City is a great first-person dungeon crawler for the Vita. Although marred by some annoyances, it is definitely worth checking out if you're a fan of the genre.