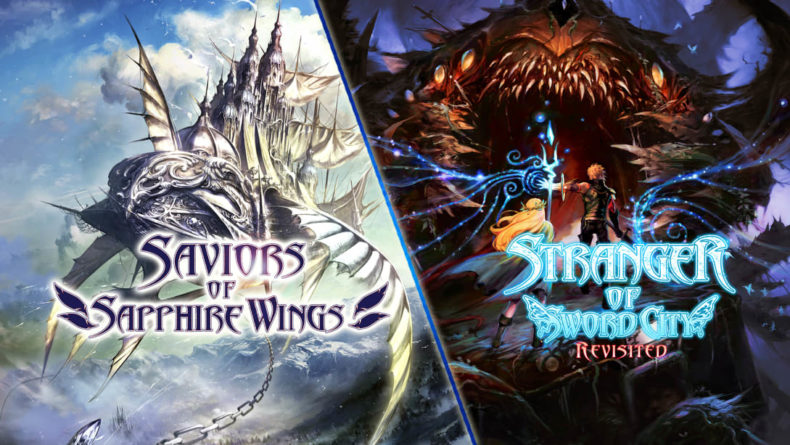 Dungeon crawlers aren’t exactly trendy these days. Maybe when Wizardry first came on the scene exploring corridors was considered cutting edge, but nowadays wandering round a grid might be considered a little dated. There’s definitely an appeal to this often forgotten genre though. For fans of pure turn based RPG combat, dungeon crawlers undeniably keep the focus almost entirely on the battles. Experience Inc are determined to keep this classic RPG staple alive, with Demon Gaze, Strangers of Sword City, and now Saviours of Sapphire Wings.

It’s important to mention that however you play Saviours of Sapphire Wings, you’ll also have Strangers of Sword City Revisited available to you as part of the package. The game opens with a menu screen allowing you to pick either game, giving you a lot of hours of turn based goodness to look forward to. I’d definitely recommend starting with Saviours of Sapphire Wings though, as it’s a lot more beginner friendly than Sword City. 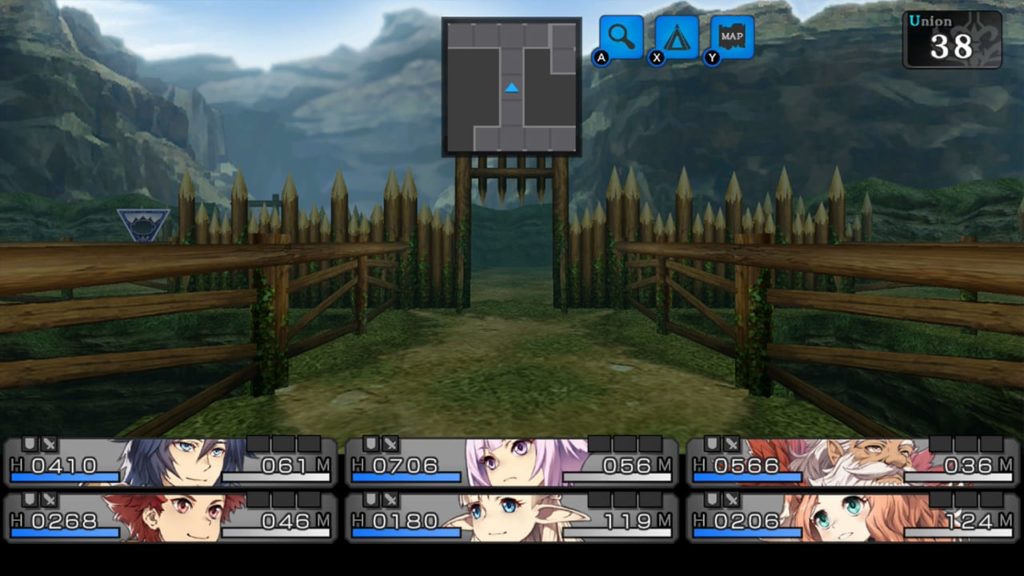 After falling in battle against the Overlord of Darkness Ol=Ohma, our hero vanishes for 100 years. Once a century has passed, you discover you’re the only person capable of saving the world from hordes of evil monsters inhabiting a land much more grim than the one you left behind. This means gathering a group of allies to finally pry the land from Ol=Olma and saving the day.

Let’s not jump the gun though, before then you’re going to have to do some good old fashioned exploring and leveling up. Dungeons are all grid based, and are mapped out as you explore them. Other than the mapping though (thankfully) this is as traditional as it gets. There are mazes of corridors, hazardous floors, and a ton of random encounters.

Combat is a standard turn based affair, but with plenty of abilities to keep things interesting. Each character has a class you can choose (with a suggestion if you just want a balanced party) with its own selection of skills. There’s all the staples here, with healers for healing, wizards for throwing fireballs, and fighters for swinging swords. It’s important to choose your classes (and sub classes later in the game) carefully though, because when you get enough members you’ll fill up your front and back row. 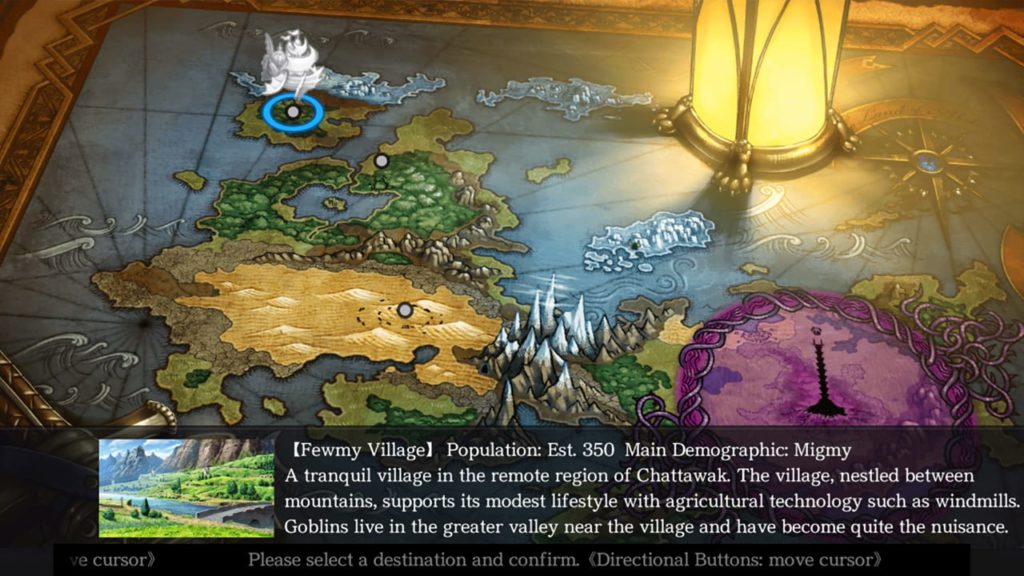 You’ll need to carefully manage your moves when in tough battles, but against easier foes you won’t really need to pay attention. Fortunately there’s an auto battle function, as well as a fast forward option to blitz through these confrontations. In most dungeons I’d spent a little time in, I’d just set battles to repeat moves that didn’t use up my magic and usually didn’t suffer for it.

Some of the tougher foes you encounter will be thanks to the Trap system. Each area will have Trap Points that you can bait to encourage a stronger monster to appear, which will drop treasure chests if you beat them. It’s often necessary to activate all Trap Points to complete a side quest or even progress, so you’d better bring a nice selection of food with you to tempt the monsters.

Outside of exploring dangerous areas, there’s plenty to keep you occupied. Alongside the usual towns and shops, there’s also the Rondaer. This aerial base is full of stuff to do that’ll raise your chances of success. The notice board gives you side quests to do, a Magic Furnace that buffs items of a particular type if you throw enough into it, and an Alchemy Pot for all your crafting needs. 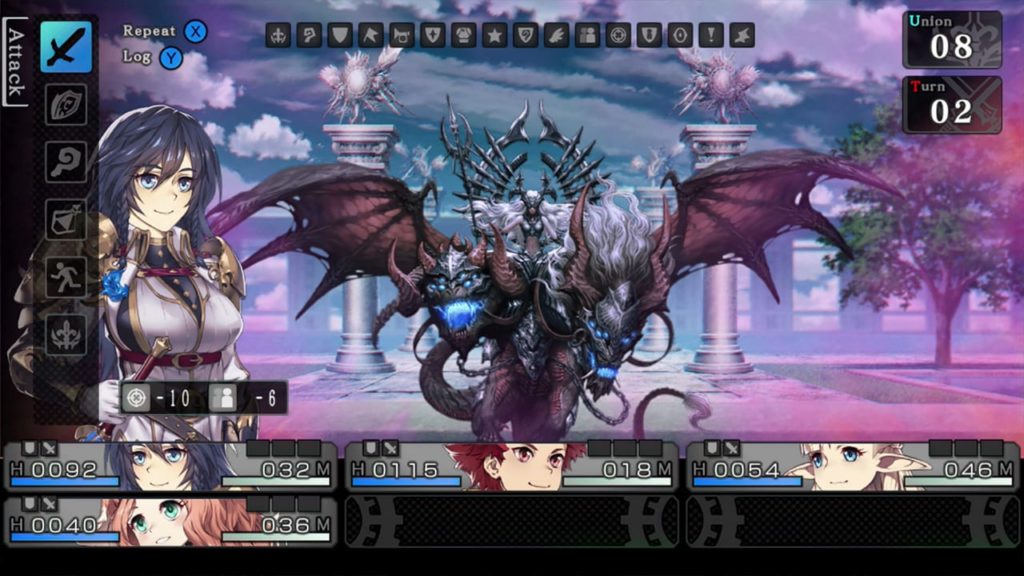 To ensure your party is united against the coming threat, you also have a room on the Rondaer to improve your bond with them. When you call one of your squires to your quarters, you’ll be able to share a meal and have a chat to get to know them better. Raising bonds gives you access to some powerful new abilities, and is definitely worth investing time and food into.

Since it’s included, it’s worth also talking about Strangers of Sword City. We had a full review of this standalone title when it released, and it still holds up today. The previous Experience Inc title is definitely a tougher game to get into than Saviours of Sapphire Wings, but is well worth the time investment. Much of the gameplay is similar too, but it soon becomes apparent that the refinement of Sapphire Wings makes it by far the best part of the package.

Saviours of Sapphire Wings is great dungeon crawling RPG, that’s accessible for those unfamiliar with the genre without compromising on the difficulty. With Strangers of Sword City also included in the package, there are so many hours of content to indulge on here.

If you're hankering for some classic dungeon crawling, Saviours of Sapphire Wings is an accessible yet challenging way to go.