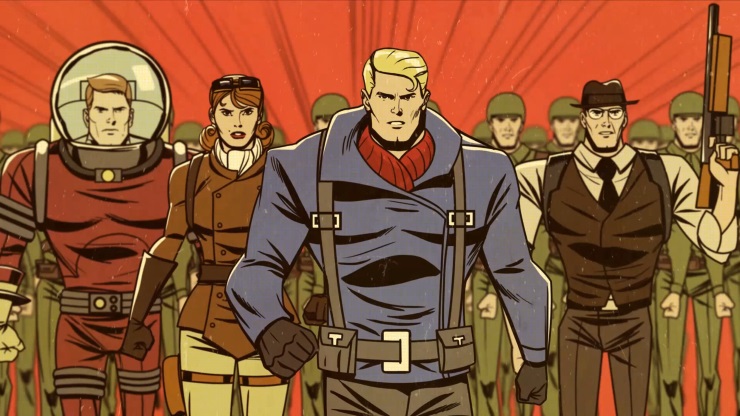 If you’ve ever wondered what would happen if EDF were to go on a date with The Bureau: XCOM Declassified, hit it off, get married and conceive a child during a drunken threeway with the Tower Defence genre, look no further than Fortified. An amalgamation of XCOM‘s B-movie-esque 1940’s setting, EDF’s frantic running and gunning and Tower Defence, Fortified is one of those games that scratches an itch you didn’t know you had.

A year after the Martians made contact and began their invasion of Earth, humanity has begun to fight back. From the conflict, four heroes have risen – the Agent, the Spaceman, the Captain, and the Rocket Scientist – to rally our forces and push back the enemy. It’s all explained in a little comic-bookish intro when you start up and choose a character, but it’s largely immaterial. The story isn’t really built upon in any significant way beyond a Starship Troopers-style “They will fight! And they will win!” deal.

Once you’ve selected your character you get to choose the stage (there are 12 maps in the campaign) and adjust the difficulty, and you can also change your character if you please. The action comes at you in the third-person and, while all four heroes move and shoot in more or less the same way, their diverse skills and weapons facilitate the four-player co-op. The Captain, for example, is pretty straightforward, packing a shotgun and machine gun, while the Spaceman has a freeze gun, the Rocket Scientist carries a high-damage grenade launcher and a laser pistol. The Agent may not pack much of a punch, but his deployable snipers make him ideal for support. As you earn XP for completing missions (and, yes, grinding is an option), you can unlock TNT launchers, long-range rifles or improved laser weapons. Enemies will drop in from predetermined points on map, and attempt to destroy a rocket armed with a nuke to hit the Martians back. All you have to do is keep the rocket alive through all the rounds, facing increasingly larger and more versatile enemy forces.

Luckily, you don’t just have to shoot things (although the shooting is fun). Instead, each character has a variety of deployable defences that can be installed for a set price between enemy waves. All you need to do is hit RB, cycle to the desired item and press RT to place it. The variety is such that any number of characters working together can produce some devastating effects, but even a soloist can put up a decent fight with any class. For instance, the Rocket Scientist can drop mounted rocket turrets, the Captain can deploy infantry (who will follow you if commanded or dig in where they’re placed), the Spaceman has a supply of freeze mines or can use wall-mounted traps to halt several enemies at once in their tracks, while the Agent uses proximity devices to inflict damage on passing Martians or can deploy snipers to assist you – and that’s all in the first few stages. Later you can unlock anti-tank cannons, auto-guns, Tesla troopers and anti-air artillery, among others. There’s a limit to how much you can place, and your funds are finite, too, but later missions throw enemies at you thick and fast and even a well-oiled team can struggle to keep up. As a result, there doesn’t feel like a lot of difference between Campaign Mode and the endurance-style Invasion Mode, but the latter is more fun with a full squad of friends. You can’t play with AI or field more than one hero yourself, so without buddies you’ll be holding off the invasion all alone.

And the Martians definitely aren’t messing around. The enemy types are incredibly varied, from spider-like drones and clunky robots to towering War of the Worlds tripods, flying saucers, aerial units and something called an “Annihilator” that reminds me of the spinning balls of death in schlocky action movie Battleships, that come barreling at you with worrying speed and do massive damage if not intercepted.

In many ways, Fortified is a pretty straightforward game. The only timer or gauge you need to watch is for your special ability, which varies by class but universally grants a period of invulnerability. The Rocket Scientist can fly for a while when you hit both sticks with a full meter, whereas the Captain calls in repeated air strikes until the gauge is empty. It means you can focus on the defences themselves between waves, and killing the enemy during, with very few distractions. The simplicity extends to the aesthetics. The maps are well detailed, but the deployable units, defences and enemies are identikit models. The only variation is found in the heroes themselves and the effects of their weapons – upgrading the Captain’s shotgun will grant you incendiary explosives, for example, which set enemies on fire and make for some pretty explosions if you target explosive barrels or enemy robots. The environments, while drawn well enough, aren’t particularly inspired, and the music is par for the course: it serves its purpose to ramp up tension, but you won’t remember it when you switch off the Xbox One. It’s also fair to say that the lack of real obstacles or dynamism in the maps causes Fortified to pale over time, and prolonged bouts might well leave you feeling a little burned out and in need of something flashier. It’s fun for a while, but it lacks the pizazz and personality of multiplayer defence games like, say, Dungeon Defenders.

Like many games of its ilk, Fortified is better with friends. Whether playing Campaign or Invasion, having people to talk to, coordinate with and rely on makes the whole experience more dynamic and exciting – though it’s still an enjoyable romp alone in small bursts. The story may be non-existent and the graphics aren’t ever more than pretty scenery, but the large variety of weapons, defences and enemies, along with the diversity of the four classes, make makes for a high degree of replayability as you unlock and upgrade everything on offer. In the end, Fortified is a gestalt entity comprised of lots of bits and pieces from lots of other games, but it knows what it is and what it wants to achieve and, by and large, it succeeds more often than it fails.

Less fun alone.
Not overly pretty.
Missions feel samey after a while.

Fortified marries several genres successfully, but its diverse arsenal can't quite make up for a lack of mission variety.