Not a Hero PS4 Review 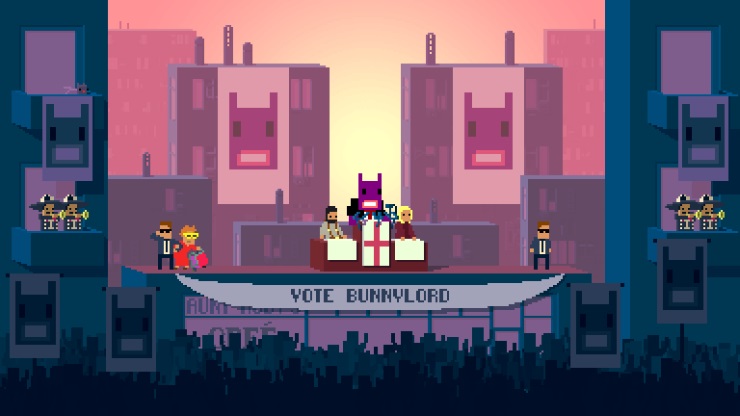 Not a Hero takes the rinse and repeat formula and shoves a rocket up its arse, all while turning the insanity and fun up to eleven. If Super Meat Boy and Hotline Miami had an illegitimate child, this would be it. You work for a vulgar, purple anthropomorphic bunny called Bunnylord who has travelled back in time to be elected as major so that he can save the world from total annihilation. His methods are questionable, but the loveable, witty rabbit (if a little psychotic) provides some comic relief during his legendary pep talks in the briefing room and coffee shop.

The game is a nicely written amalgamation of typical British humour and neo-gangland anarchy, providing plenty of laughs, and the challenges are difficult enough to keep you playing and swearing like a sailor for hours. Not a Hero is a 2D cover-based shooter and does a fantastic job of training your brain to problem solve and plan your attack in the thick of the action. There’s no ducking behind walls or dumpsters, instead the cover takes place by slipping into the shadow of a wall or a doorway, taking part in western-like shootouts. By tapping a button, you can use the cover to reduce the risk of getting shot, but I found the sensitivity in the controls was too much. If you pressed the cross button even a tiny bit harder than you needed to, you’d end up sliding across the room right into the path of a gangster or three. There are lots of bullet types and explosives you can use to blow up enemies, such as the ‘Fatboy’ grenade launcher or ricochet bullets, each one offers a bigger blast radius or a more precise takedown, depending on what the challenges are for that particular level. There was one particular stage that I struggled with and I’d been playing it the same way over and over. On my ten or twelfth playthrough, I found a gun turret somewhere that I hadn’t been before and at the point where waves of SWAT team members were after me, I popped it down and let it do all the hard work. Intelligence is the key and Roll7 rewards you for your efforts by offering you that light at the end of the tunnel.

Each level has you completing challenges that add a touch of finesse to the chaos. Roll7 has given a structure to the game that you can abide by if you so wish, and by thinking outside the box to complete these challenges adds another layer to the fundamentals. Tasks like killing a certain number of gangsters in a certain time or finding random objects within a stage increases how much of the game you complete. Not only does it give you more to do, it unlocks a wider range of characters to play as.

There are nine playable characters in total and the higher your approval rating (the percentage of the game’s completion), the more of these you get to play as. Along with different personas and accents, these characters offer certain skills that you can use to your advantage. If there is a level that requires you to whizz through within a certain time limit, select the Welsh wunderkind Samantha who can run and gun at the same time. It is very similar to Hotline Miami in that sense; replace the weird animal masks for quirky, multitalented rogues and that’s the general gist.

Not a Hero is a lot of fun, but it can cause an aneurism or two. Along with the already mentioned sensitivity issues, your health deteriorates a lot faster than it should, meaning death tends to find you a lot quicker than the finishing line. There aren’t any checkpoints, so when you die it’s back to the drawing board and with your health bar depleting faster than Donald Trump’s chances of gaining presidency, it can be infuriating to say the least.

Most of the levels are too similar in how they are structured. For example, the first section of the game takes place in buildings with pink walls, floors and furniture that never really change and each stage looks just like the last. That’s not to say it’s ugly by any means, the pixels fall in all the right places and each character looks great; it’s polished much like Fez was and the bright neon palette brings more bite to its already loud bark.

Not a Hero doesn’t hold back on violence or humour and the hypnotic addiction that comes with it is akin to that of Super Meat Boy: you’ll play it until you beat it, regardless of how sodding difficult it is. This is a testament to Roll7’s hard work in making this a solid 2D shooter and one that you can throw on when you want to shoot senselessly and in abundance.

Humorous and full of wit.
Wide range of weapons and challenges.
Bunnylord.

Not a Hero is a funny and frenzied game that will have you laughing out loud as you attempt to conquer its varied range of challenges, even if there are a few issues with its cover system and level structure.