Labyrinth Preview: a CCG with a difference 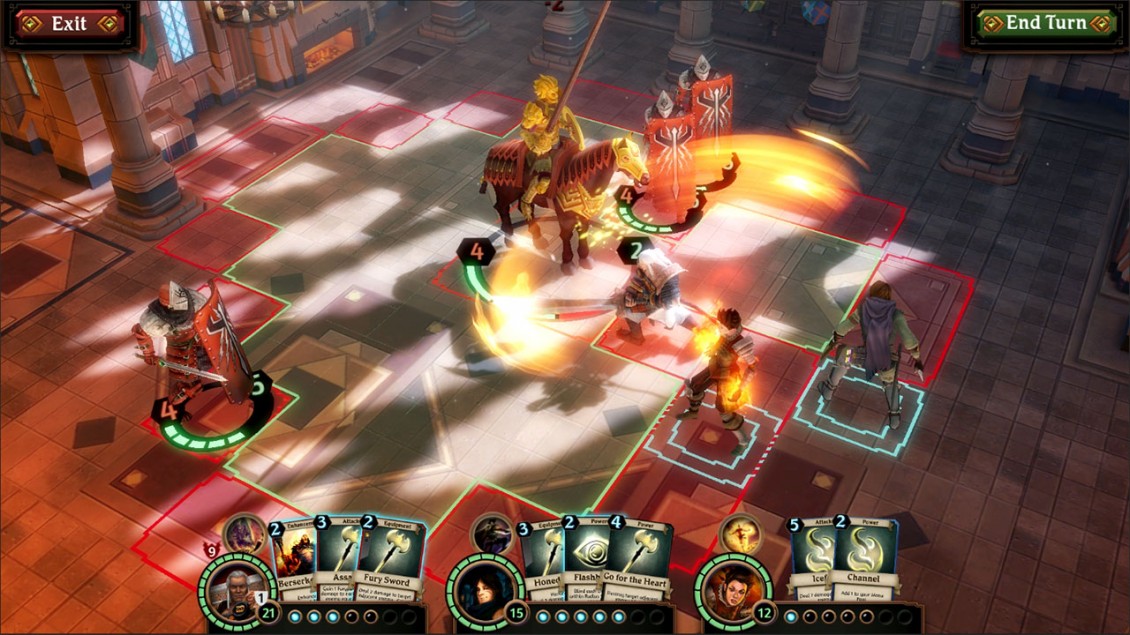 Collectible card games (CCGs) have been around for a while now. Since the early days of packs of football or Teenage Mutant Ninja Turtles cards, to Top Trumps, then to Pokémon and Yu-gi-oh. Nowadays Netrunner is pretty popular, not that I can invest in physical card games. Digital CCGs are becoming increasingly popular too, the aforementioned Pokémon and Yu-Gi-Oh have digital counterparts alongside stalwarts like Magic: The Gathering and Blizzard’s darling Hearthstone.

Free Range Games is looking to try something a little different in this genre by combining the CCG template with a tactical RPG and dropping it into a full 3D setting. Here you can see your attacks as they’re performed rather than watching one icon bump into another.

What we have with Labyrinth is you controlling a party of three adventurers, each with their own decks of cards encompassing attacks, enhancements, minions, healing and more. The build I played pitted my party against boss named Roggix the Incinerator – a lava rock demon – in his volcanic lair. I moved my steadfast heroes about the grid based arena into handy attacking positions while simultaneously bolstering their defence stat to protect them from Roggix’s attacks while I set myself up to give him what for. Being a title in alpha there is no tutorial, and I got pasted before I could even get his health down to half way – that’s what comes from trying to learn on the go, if you don’t pay attention to the effects your cards have then you won’t be able to adequately plan for what your enemy can do, and so my team was wasted.

Not to be disheartened I went back to the main menu and checked the decks for my warriors, ensuring that the cards they had consisted of a mixture of defence and attacking options, as well as cards that have multiple uses, while also ensuring that each character at least had a means to heal themselves, then I went back for another go. The more I experimented, the better I got, and on one attempt I did manage to get his health down to single figures. Alas I never did manage to beat that fiery fucking bastard, but I at least feel I gave him a thorough work out.

Each card in the game comes with a cost. Unlike Hearthstone’s crystals, Labyrinth operates on a tick system. An icon for each character appears at the top of the screen, and this bar indicates what ‘tick’ (read: turn) is currently in play, and whose turn in the order it currently is. When a card is spent, the cost moves your character along the specified number of ticks. So, a character can take a turn with a card that costs four ticks, and then the following one can play one that costs two, that second character will then get another turn in two ticks time while the other character must wait. Cards with higher costs tend to have more devastating effects, and others can have lower costs but require several turns to ‘wind up’, both of these give the game a nice risk/reward system. Labyrinth is still in alpha, and it shows. The frame rate is pretty low at all detail levels, and there are balancing issues with some cards being next to useless, and the bosses being overpowered. The development team are well aware of this, and have already issued a patch that has improved the frame rate at lower settings, and also lowered boss health slightly, giving you more of a chance to put up a fight.

Another curious omission is the lack of a ‘pass’ button. For instance, you might be too far away from an enemy after moving for you to attack, or even for them to attack you, so you’ll want to just skip your turn as to not waste a card. This is odd because a gameplay clip on YouTube shows a pass button in place next to the each hero’s hand, yet in the current build it is absent. Not the end of the world, granted, but with a finite amount of cards to draw from, wasting cards isn’t good strategy, which is a fundamental part of tactical RPGs.

What there is here, though, is a lot of promise. The game looks decent and has a great collect-them-all hook that comes with the CCG style of game. It just needs a little bit more development time to iron out the niggles, and an implementation of a tutorial to help to people grasp the basics. It’s not really fair to compare it to the likes of Hearthstone and Magic: The Gathering because Labyrinth ploughs its own furrow, and Free Range Games has created a neat little game here, and one that I sincerely hope it lives up to its potential.

A lover, not a fighter and an all round good guy (he would say that, he wrote this after all), he's happy to be here as part of GIAG.
MORE LIKE THIS
Skybound

The Escapists: The Walking Dead is getting a free Survival Mode