Masquerade: The Baubles of Doom Preview 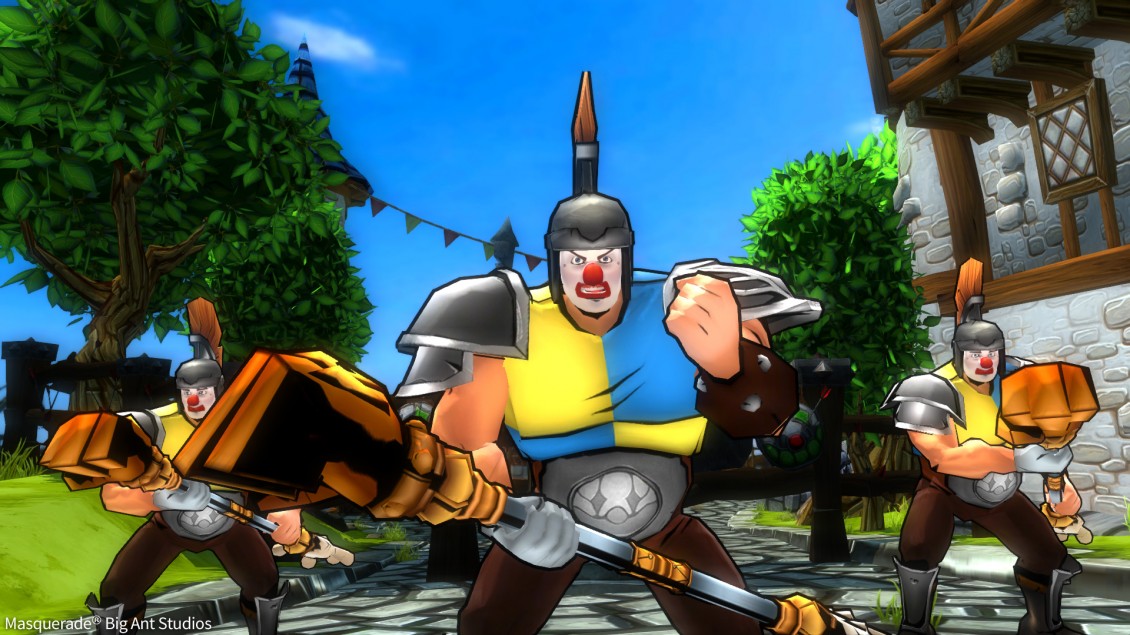 Clowns: you either love them or you hate them; they’re either being silly, insidious or selling you massively processed fast food. The thing about clowns is that they make good fodder for fighting games, as it gives a perfect excuse to make them all look the same, with white make up and a big red nose.

Masquerade puts you in the shoes of Jaxx, the Jester – a sort of combination of The Tick and Hawkeye with a giant hammer – as he fights to retrieve his lady partner (so far, so unoriginal), Comedia from the grasp of the Clown Don Big Nose. On his quest he’ll need to battle through the clown army, erratic camera and fiddly controls.

The rather ridiculous premise of clowns and jesters battling it out at least gives Masquerade a reason to look extremely vibrant and colourful, the cel-shaded look gives it something that differentiates it from the majority of fighting games these days, with their grimdark looks (Bayonetta notwithstanding) and mature themes, Masquerade is nothing if not immature, with butt attacks, light swears and toilet humour; it’s safe to say it doesn’t take itself seriously. Combat has been borrowed from the recent Batman games, with a button to attack, and repeated attacks performing combos, while tapping another button when an icon is above an enemy’s head allows you to counter hits, even finishing off the last enemy in a group grants a slow-motion cut of them falling to the floor just like Warner’s series. Unfortunately this is let down by a camera that is too close to the player character, meaning that enemies aren’t in shot to know when you are able to counter hits, this includes melee as well.

Platforming also suffers as a result. Running in a straight line is practically impossible, and camera angles obstruct the view of ledge positions when platforming, which when compounded by the fiddly controls results in many deaths. The game likes to taunt you after each death as well, with Jaxx, and the narrator berating you for poor performance, while you sit there, rocking back and forth whispering “It’s not my fault.” Over and over to yourself.

It took me one hundred and two minutes to finish the first level, mainly because of the amount of times I died during the frequent and frustrating platform sections, and then my progress didn’t save, meaning I had to play the entire first level again. This was only a preview version however, and it’s possible that Big Ant Studios could fix the controls and calamitous camera at least making Masquerade a much more enjoyable experience than what I went through, albeit one that won’t win any awards for originality.