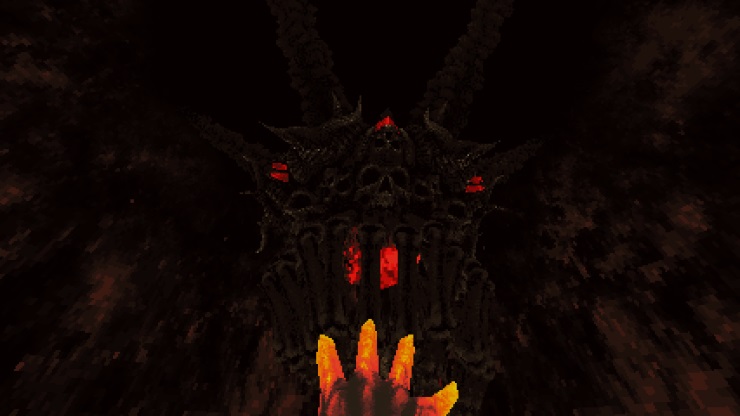 It’s rare that you can play a game for six minutes and totally, completely understand it. But that’s all it took. The frenetic speed and the monstrous difficulty of Devil Daggers is apparent that soon into playing it. Twitch based shooters have been done before, and probably looked a lot better, but it’s not often that they will absorb you so deeply, causing random ten minute sessions to warp into demonic, sweaty palmed, lengthy sessions.

The concept is beyond simple: it’s a high speed, Quake-like first-person shooter that throws you into a dark, vaguely circular arena and throws wave after wave of horrible enemies that seem to spawn from hell and will kill you if they touch you. Spinning spires that vomit out a cascade of enemies are the first you’ll see, but there’s an objective here, and the red diamond shape that each larger enemy has on their person is the key to taking them down. Then horned evil joins them, and not long after that, a venomous, disgusting spider that actually swallows up the gems you’re trying to get.

And that’s important, because those red gems are the key to getting further. As you collect them, your weapon will upgrade. The controls are simple, and so is that one gun. Holding the left mouse button will fire it like a machine gun, but clicking once will cause a shotgun-like blast to explode from the end of your fingers, which is the very weapon that keeps you from death, and presumably your “Devil Daggers”, but honestly, it doesn’t matter. There’s little else to it, really. You can jump around as you run, gaining momentum a bit (I’m not sure if it’s in my head or not at this point) but ultimately this is a score attack game. After you die (and you die more frequently than you do in a FromSoft game) you’re met with a screen that shows you how many enemies you killed, but more importantly, how long you lasted. From the first 20 second run to the near minute-long run that sees you first meet the spiders, to the bosses (there are apparently lots, but I’ll never see more than one, I suspect), it’s a chase against the random people on the leaderboards, and your friends.

You’ll want to put it down, you’ll want to escape the horrors, but then you’ll see Mr. Random on that leaderboard and think you can beat him, and eventually you will – hopefully. I want my friends to play this game, I want them to send me messages about how they’ve beaten me, then I’ll boot the game up and spend time trying to beat them back, then send them a picture of my time, maybe with an added message that simply says “fuck you”. But for god sake don’t look at replays of the best player on the leaderboards, as you’ll hang up your mouse for good – these people are geniuses. It’s not much to look at, but the audio is oppressively bleak and violent, I sure as shit wouldn’t want to play it with headphones on. There’s no GamePad support either, but you can stick the idea of playing a game this fast with a gamepad right up your jacksy, quite frankly. Sure, it’d work on PS Vita because it’s such a pick up and play game, but despite the visuals being less than stellar, this is a PC-game, indeed, it’s the kind of game you only get on PC, even nowadays.

Make no mistake, this is a brutally difficult game that only a tiny percentage of people will actually get further than the 60-second mark with. There’s perhaps too much luck involved at times, and despite getting a good run, you might feel incapable of getting back to the lofty heights you once saw. But when you’re in the zone, Devil Daggers tunnels into your very bones. There’s nothing else in the room with you, and there’s no escape. Before long you’ll be hitting the “R” key before you even see the results screen, because you know you failed to best yourself, or anyone else. A violently hard game, then, but one that is pure digital crack. Devil Daggers might grab you by the balls and shake you until you’re sick, but you’ll always go back for more.

Utterly addictive.
Executes its idea so, so well.
Cheap!

Very niche.
What you see is what you get.

A brutally difficult game that is pure digital crack. Devil Daggers might grab you by the balls and shake you until you're sick, but you'll always go back for more.