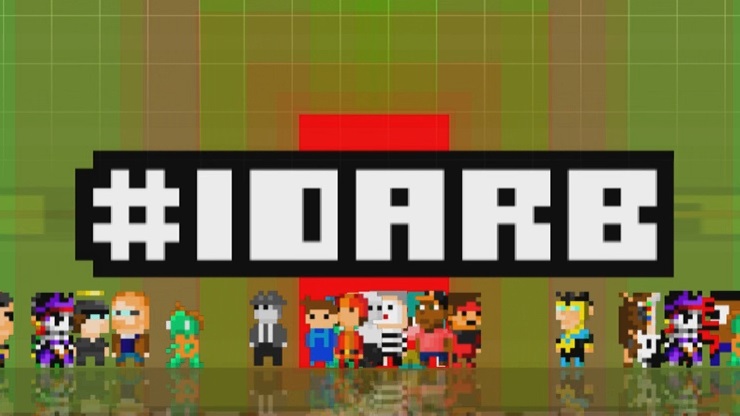 #IDARB (also knows as “It Draws A Red Box”) is difficult to describe to the uninitiated. This is probably down to the fact that developer Other Ocean, after posting an image of the aforementioned shape on social media, collated a number of suggestions from Twitter users, friends and family, that turned a picture of a red rectangle into a video game. It’s basically an eight player football-platformer-basketball-beat ‘em up sort of thing. Bare with me…

Two teams (up to to four in each squad) battle it out on quite a small map with platforms and two goals. Get the ball into the opposing team’s net and pick up points. Points are predicated on how you get the spherical object into your rivals’ goals, though. If you walk it in, you get one point. If you score after a successful assist from your team-mate; it’s two points. Then, there’s the matter of how many times the ball bounces before it goes into the net; whether you score from the two point, three point, or five point zone – effectively, an #IDARB match is nearly always a tight affair due to the number of possibilities for scoring big.

Throw in the random events of hashbombs and you truly understand the chaos of what an #IDARB match can be. By using a unique match code that’s displayed on-screen, people can directly effect what’s happening to the field of play. For instance, #freeze ensures that whoever has possession will find it difficult to pass or shoot as the ball sticks to them, #flood fills the arena with water and #fungus sees the map covered in green blotches. The list of hashbombs is astronomical and allows those watching to, in a way, get involved in the fun. Some will no doubt frustrate the actual players, but it’s difficult not to laugh as the wonderful Rick Astley travels across the bottom of the screen – once, maybe twice. Look, a lot of these are meme-focussed, so there’s bound to be a tendency for them to get tired after a while. Thankfully, because there’s so many, you hopefully won’t see the same ones constantly. #IDARB is manic fun, but there’s a fine line between having a great time because it’s so off-the-wall, and getting bored because you can’t comprehend what’s happening on-screen. In a two-on-two environment, it’s at its best. A cross-field pass to your team-mate, a little dummy around the last defender and a rocket of a shot into the back of the net is satisfying as hell. While the craziness is here in spades, solid moves can be played when the player count is at a comfortable four. Anything higher than that and it’s a mess. As there’s a whole host of colours on-screen and hashbombs happening every couple of seconds, trying to decipher which character you are controlling becomes a pain. All skill goes out the window and people begin to just take long-range efforts and hope for the best.

It’s astounding how a match with a controlled number of participants can be a good laugh, while a few more bodies can make it excruciatingly dull. There were points where in the single-player mode I was playing with seven AI controlled characters, where I could lay my controller down for a minute and not have to worry about my team’s performance due to the AI being so talented. I could actually start the match, walk away and see that I’d won, without doing a single, solitary thing. But, why would I want to, when it’s shambolic, jumbled anarchy?

And boring, too. There’s nothing to the single-player. A few matches in which you take on the CPU, slowly growing in difficulty yet never becoming a problem, the single-player feels like a missed opportunity. You can’t jump in and play a friendly of sorts, it has to be within the confines of the “story”, per se. The selling point is multiplayer (and I completely get that) but a more thought out option for the sole-player would be welcome. However, if you are lacking an #IDARB crew to play with, you do have the creative suite to mess around in. Create your own midi files to use as your victory songs, or a team of your friends and family in the character editor.  Both are fairly limited customisation tools, and like the gameplay, are easy to jump into. Again, like playing #IDARB itself, if you want to get good at creating little pixelated Andy Carroll-alikes, or compose a decent rendition of “I’m Forever Blowing Bubbles”, then you’ll have to spend some time with them.

#IDARB’s main objective is to get you laughing and having fun. If you have a couple of buddies on the couch with controllers in-hand, it can do that, easily. Invite one too many friends over and the laughing turns into groans. Anything above four players and matches quickly descend into disarray. But at a lower limit, it has the potential to be one of the better local co-op games you play this year.

Anything above four players and it becomes muddled.
Single-player mode is very limited.

At a higher player count, the chaos get's too much, but when it's at its best, #IDARB is a hell of a lot of fun.