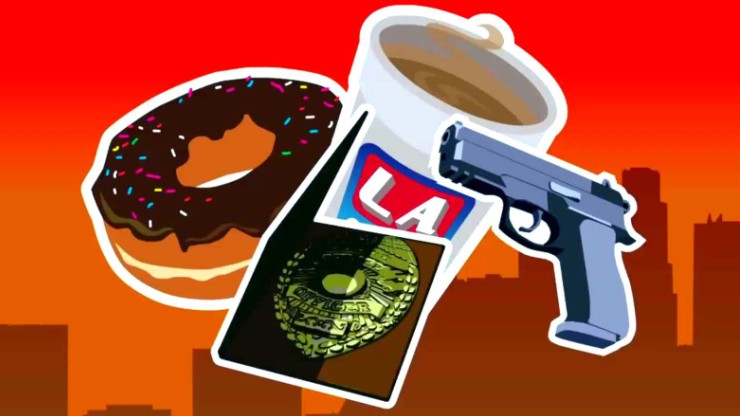 A name counts for an awful lot. A rose may still be a rose by any other name, but if a rose was called a fart-horn, would you still buy a bunch for your other half on their birthday? Had Leonardo DiCaprio and Sigourney Weaver just been called Phil and Mabel, respectively, would they still be the icons that they are? Actually, maybe. They’re bad examples. My point is that LA Cops is a stupid title, right?

It’s stupid because it’s almost too bare-bones, and not clever enough to be amusing. They could have called it anything to better convey what it actually is, as a game. Because yes, it does feature cops in LA (although they could be cops from anywhere, really), but the title doesn’t even hint at any of the cool stuff it does. It would be like naming Call of Duty “Military”, or calling Forza “Driving Cars”.

For instance, it’s set in the 70s, and thus features awesome mustaches, righteous collars, groovy aviator shades, and exactly one of each token minority in the character line-up. It rocks funky tunes, a psychedelic art-style and some pretty excellent shooting. And it has a character called Chet Kowalski, which is officially the most American Cop-ish name ever. But, frustratingly, it has a title almost guaranteed to make you skim past it in any online store. Anyway, gripes over the title aside, let’s talk about the things it gets right instead. LA Cops is an isometric shooter that sees you take control of two police officers from a selection of six, and embark on a series of Hotline Miami-style full frontal assaults for reasons that aren’t always crystal clear beyond the fact that you’re the cops and they’re the crooks.

Just as in Dennaton Games’ masterpiece, you’ll need to fire first and fast in every encounter. The AI has no process more complex than “shoot player now”, and some levels are fit to burst with bad guys. The unique element here is that you control a team of two, and can switch between them at will with a tap of the Y button. The one you aren’t controlling won’t move until you mark a point with A, but will cover their cone of sight and shoot with lethal, immediate precision when disturbed. Enemies can be marked one at a time with a push of X, and you never miss a designated target unless you botch your line of sight.

Essentially, this makes it a tactical experience, as you can set up and lure an enemy into a cross-fire, storm a room from two angles simultaneously or, at a very basic level, keep a second life in reserve. Once one of your cops is down, they’re out, unless you can find the single randomly-placed first aid kit in the current mission area and revive them. You always start with pistols with limited ammo, but can switch to shotguns, uzis and grenade launchers as you find them. The action is fast-paced, the violence sudden and shockingly colourful as each death spatters the bright, cartoony visuals with excessive arterial spray. Often death comes so fast you don’t realise you lost one of your characters; it’s like DiCaprio’s sudden exit from The Departed every time. You’re marked after each stage based on stats like completion time, kills vs. arrests (hitting LT up close will instantly and silently cuff a goon), and collateral damage. With only nine campaign missions and a handful of bonus levels, LA Cops isn’t the longest game, and a lack of collectibles means the only reason to keep going back is to play a tougher difficulty and improve your score. Luckily, the bite-sized levels cater to such appetites.

It has less personality than Hotline Miami, but more tactical clout, and it’s oddly less likable despite being much less grim. The fact that you can upgrade each cop individually using a group pool of gathered XP means you have some aesthetic variety in your chosen characters, but it’s nowhere near the eccentric diversity seen elsewhere. The missions don’t vary a great deal, and one area looks pretty much like the next, but the gameplay just about makes up for a lack of pizzazz and a noticeably absent plot (the handful of cutscenes don’t add a lot to the mix).

But then, to accuse LA Cops of aping something else is a tad unfair. It’s a solid, challenging, unique shooter that makes you stop and think about how to approach a given area every single time. It’s very rare that charging in blindly will get you through, and that forces you to follow its rules and play it tactically, which is a clever move on the developer’s part. Far cooler than its name suggests, LA Cops is well worth taking down.

A good little shooter that could have been great, L.A Cops is like a nicer version of Hotline Miami that's a bit on the blander side.