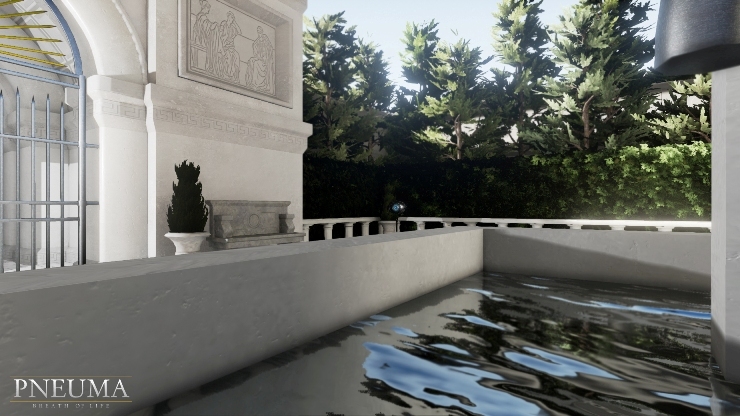 Pneuma: Breath of Life is a first-person puzzle game that puts you in the shoes (so to speak) of a new God, discovering creation for the first time. You do this mostly by wandering around pretty 3D environments, solving physical conundrums that allow you to progress, and it’s all very existential indeed.

It’s an incredibly simple game that starts off easy and becomes steadily tougher as you go on and the intricacy of the puzzles increases. To begin with, your main concern is opening doors by looking at a glowing blue eye-shaped device. If you look away, the door will close and impede your progress. Slowly this central concept becomes more complicated, as the eye devices start to control rotating platforms and bridges, and you’ll need to move various objects in the world to afford you a clear eye-line to the “key”. Most of the puzzles revolve around some variation of this, but later on you’ll be solving more and more intricate head-scratchers, some of which require a great deal of thought and planning to conquer. The biggest hurdle you’ll need to leap with Pneuma is that it’s very idling for the first few chapters. The pace is so slow and the environments so bland that I found it hard to engage with the world. It’s all very “ancient Greece”, with marble pillars, fountains and statues; everything is golden and beautiful, but it’s all so “blah”. It’s also not unfair to say that it simply doesn’t look as good in the early stages as the developers think it does, either. On the whole, the environments aren’t particularly well detailed or inspiring, and it all looks a bit like a tech demo at times. Once you move outside of that initial area and start to explore dark, atmospheric forests and the wonders of the cosmos, it becomes more enchanting, if never overly enthralling.

The second big issue is that of the protagonist’s voice over. The disembodied voice of the entity you control is mind-numbingly incessant. At times there are flashes of comedy that raised a smile, but he simply doesn’t shut up prattling on about his existence and the world, contemplating whether he should make himself legs or invent lemons. It’s mildly amusing for a while, but quickly becomes grating. Thankfully, he doesn’t repeat anything, so if you’re stuck on a puzzle for a while he will go quiet. The downside of that is that it then feels depressingly lonely and barren. Pneuma is fairly short, and there’s little reason to return when you’re done unless you really like that voice over. It’s easy to see that the developers were aiming for a sense of awe and wonder, but trying to translate that through the medium of a voice over who is always awed is like beating you over the head with it, especially when you’re simply not really feeling it yourself.

At times, the motion can be a little dizzying, too. Several puzzles require you to spin a platform you’re standing on, or look up and spin an entire room. Each time I had to do this I was left with motion sickness, which put me off continued play. Pneuma is an unoffensive puzzler that looks nice and plays safe but fails to excite. A decent game to kill a few hours if you’re in the mood for a conundrum to solve, but not one to jump up and down about.

An aesthetically-pleasing but decidedly empty puzzle game, Pneuma scratches an itch but fails to excite