Schrodinger’s Cat and the Raiders of the Lost Quark Review 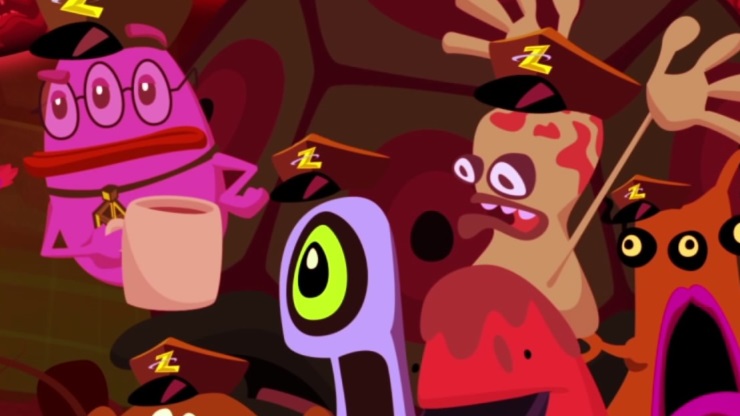 Puzzle-platformers are almost as ubiquitous as first-person shooters nowadays. More recently popularised by such hits as Braid and Limbo, it seems that every other independent release on Xbox Live or PSN is taken from the genre. And unfortunately, too many of them are dull and derivative. Thankfully, Schrodinger’s Cat and the Raiders of the Lost Quark (from here on in to be known as Schrodinger, to avoid this review being the longest review you have ever read) puts a few unique twists into the mix and as such at least stands out from the crowd somewhat.

Schrodinger’s Cat is an experiment that was performed in 1935, exploring the Idea of Quantum Law and dual realities. A cat is placed in a container with a radioactive substance and a vial of poison. If the radioactive substance decayed, the poison would be released, killing the cat – if not, the animal would survive. The supposition being that the cat could exist as both alive or dead, based on a low-level atomic event. The theory behind the experiment only applies in a very loose manner in his game – whereby the player character has infinite lives and will simply respawn at a checkpoint every time he dies (being alive and dead). Most modern platform games are pretty forgiving, but at least this title gives you a reason why you are indestructible.

Taking place on a subatomic level, we join the titular hero as he is tasked with saving a Particle Zoo after a mass breakout of exhibits. The Zoo is on lockdown and you have to round up the missing Gluons, Leptons, and Bosons before all hell breaks loose. This is a fairly loose plot, and little develops as we go along, but Schrodinger is packed full of science jokes and references, which are especially effective due to the well-acted dialogue sections. Even if you don’t know the difference between your protons and electrons, there are still laughs to be had – but a lot of content may also go over your head, with punchlines falling flat. It must also be said that outside of conversations, the cat repeats himself far too often and his catchphrases become quickly irritating.

This adventure spans over thirty randomly generated stages, and introduces an interesting new mechanic for traversing the game world. Whilst the Cat possesses many basic platforming actions such as jumping and punching, the bulk of the game consists of combining atoms to perform one of fourteen different abilities, which must be utilised to navigate tricky platforming sections. These atoms are known as Quarks, four different varieties which much be collected in each stage: Up quarks (Yellow), Down (Blue), Bottom (Red), and Top (Green).

In simple terms, each Quark works as follows: Ups are used to move things, Downs destroy things, Bottoms like are used for construction, and Tops act as a shield. You need at least three Quarks to activate a skill, but you don’t just deploy three Ups, or three Bottoms – here you can pick and mix until you find different combo skills. Want a moving platform? Combine some Ups (movement) with some Bottoms (construction). There are short tutorial screens to explain all of this, so you’ll be quick to both pick up and start mixing. There is a real feeling of accomplishment when you combine several different Quarks to form a new combo and solve a difficult problem.

Although this idea encourages experimentation, the levels are (sadly) pretty linear and simple to navigate. The right direction to go in is always clear, and you never really feel like you have to use more than just the simplest abilities. Walls and floors are both destructible with your skills, but there are always indestructible sections to funnel you along he correct path. Not only are areas a too obvious, but each location is too similar to the previous one. There is little to differentiate one screen from the next, and this harms the idea of progression, when it feels like you just completed the same area three times in a row.

The imaginative mechanics are further hurt by the fact that none of the enemies encountered throughout are particularly challenging. There is little need to employ Decoy or Trap combos, because explosive missiles handle almost every situation. Although you may be found scratching your head from time to time, the challenge level isn’t especially high, and it’s actually unfortunately made all the more difficult as the platforming action itself suffers from floatiness, with jumps feeling imprecise and momentum being difficult to judge.

It’s got good ideas, but the very basic elements of the platform genre haven’t actually been particularly well-implemented here. The sharp cartoon visuals and suitably squishy sound effects make the package more aesthetically pleasing, but the gameplay just doesn’t feel polished enough. Despite these issues, you will still feel satisfaction from correctly combining these atoms to get through a difficult puzzle, it is just a shame that there aren’t enough situations that really test you and make full use of the combos.

The Quark combo system is a clever and intuitive gameplay mechanic, which is sadly let down by basic design issues.