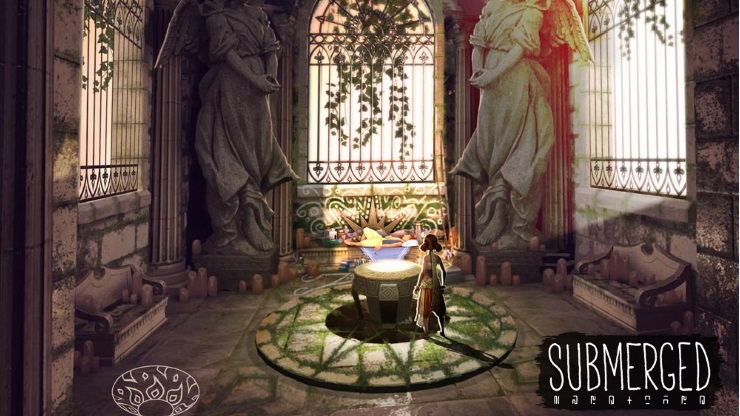 Watching the trailers and gameplay videos for Submerged, I was pretty excited for it. It’s the sort of game I would usually lose my mind over: a post-apocalyptic exploration title in which you must uncover the story of a drowned city. With ominous mutant creatures stalking your every move and alien wildlife inhabiting the sea around you, it feels like a game that should have a surefire tense atmosphere. Unfortunately, that’s not the case.

The aim of the game is essentially to collect resources from care packages scattered across the city for your injured brother. As the unnamed female protagonist, you navigate the city in a boat and scale buildings in order to retrieve these supplies: a gameplay feature that quickly becomes repetitive. Care packages can be located by scanning the horizon with a telescope, but even that is no real challenge: an obnoxious arrow draws you to the nearest identifiable item, like that annoying friend that always subconsciously looks at what they’re about to say when playing I Spy. Submerged is a game in which you cannot die. Ever. As you scale the sides of buildings and traverse the waters of the city, there is never a risk of injury or death, which feels out of place in a post-apocalyptic world. Stranger yet is the fact that stony creatures seem to haunt your presence in the city yet do not act aggressively at all. It feels like the game doesn’t know what kind of mood it wants to go for, whether it be calm and explorative or foreboding and dangerous. Because of this, it feels slightly imbalanced and rather abnormal.

If the game’s general lack of atmospheric direction isn’t enough to confuse you, then the wooden characters will surely succeed in doing so. It has been a long time since I’ve seen such robotic and unrealistic animations, completely detracting from the realism. It feels like you’re controlling a cardboard cutout, and this sense of detachment makes it difficult to become invested in their plight. Even with an enchanting soundtrack, no emotional connection is formed. The drowned city in which Submerged is set can only be described as misleading. While the concept of a city underwater is an interesting one, the scenes of slight wonderment are few and far between, and immersion is almost non-existent due to a number of graphical bugs. The frame rate regularly takes a nosedive – almost stuttering to a halt a couple of times. Built on Unreal Engine 4, Submerged looked great in its trailers, but once you get down to the nitty-gritty, the city feels unpolished and a bit broken.

Despite promise, Submerged is mediocre. It entices with an interesting premise yet ultimately fails to enchant, falling flat due to a number of graphical bugs and sense of misdirection. While it boasts a wonderful soundtrack and fascinating setting concept, Submerged is a game which has been tainted by shoddy design and lacklustre execution – producing a city devoid of soul and a lifeless protagonist who could play the part of a shop-window mannequin.

Despite its interesting premise, Submerged never achieves more than mediocrity due to its repetitive gameplay, lacklustre execution, and unpolished world design.