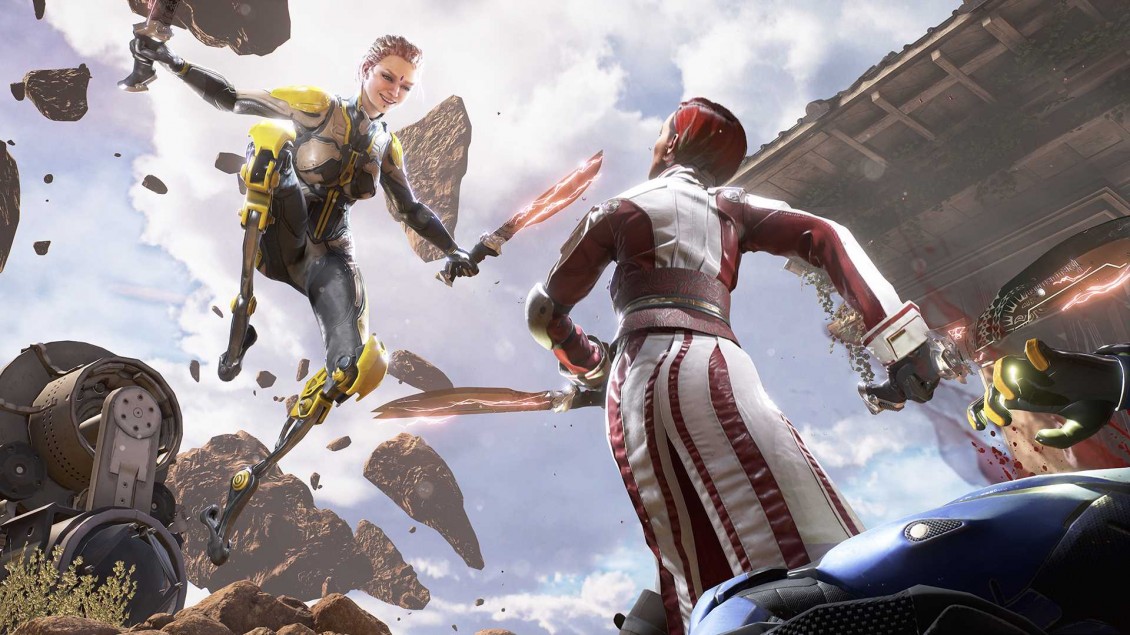 “Anyone ever tell you that you look a tiny bit like Samwell Tarly?” jokes Cliff Bleszinski as we enter the interview room at the recent LawBreakers event. “I just saw him at the Thrones premier and you reminded me of him. He’s a nice guy.”

Throughout the whole day I had been thinking about how I would kick things off with someone who, when it comes down to it, is one of my industry heroes. I had decided on the formal introduction and straight into the interview but with one question all my nerves (and plans) were gone, and I decided to tell Cliff about how I was often compared to UK daytime TV celebrity Eamonn Holmes and even the fat kid from Up.

“Well you know he kills white walkers, so there are far worse things to be compared to!” declares Cliff before we kick off our interview. The first questions are asked and the interview starts properly, but things quickly return to Game of Thrones and entertainment in general.

“I’m a huge pop culture whore so I’m always playing a game or I’m reading a graphic novel or watching a movie or TV show. We are in this golden age of TV where there is too much good TV to watch. Everyone is like you need to watch this and you’re like, Jesus there is too much. So it all goes into my head and then it all comes out in the game through some kind of weird process. I don’t really know how it happens.”

Cliff mentions Kill Bill, The Evil Dead, John Woo, and every Tarantino movie as inspirations for different areas of LawBreakers, which certainly shows with characters that bear a strong resemblance to those in Kill Bill and of course the ability to blind fire over your shoulder. While many game designers will try to tell you that almost all their ideas are completely unique Cliff was not afraid to point out that this wasn’t quite the case for LawBreakers. “One of the things you learn as you get a little older is that everything is a fucking remix. There is still occasionally new ideas here and there that are completely fresh and new but sometimes new movies come out that are essentially a spiritual sequel to Aliens, or a new version of a western but retold in a space station. There’s only so many types of universes and characters that exist before you start getting into things that people can’t understand.”

This statement feels quite apt for LawBreakers. While only a handful of its ideas are truly unique, the combination of them all is something that few have tried before. There are similarities to Overwatch and Battleborn, and at the end of the day it is a shooter not too unlike Unreal Tournament but the unique sci-fi world and the gravity mechanics make it feel like nothing else out there. Ultimately that was Cliff’s goal, making something that didn’t feel like other shooters and didn’t just copy everything from other titles.

“It’s like, well you’ve gotta have a sniper. Do you? You’ve gotta have a medic. Do you? Well, you’ve gotta have CTF, well dude you’re just making the same shit as everyone else does. Don’t you actually have a vision for what you want to make? Come up with something different and unique instead of just iterating off other people’s smoke trails. So with this game there are things that are in other games, you know, swords and kicking and everything, but the key is to take it, consume it, and this sounds gross but regurgitate it into your own. Man, I’m making you guys think I’m the mother hen who is barfing this game into other hens mouths.” Of course one of the key differences between LawBreakers and its most direct competitors is the roster of characters. Whereas Overwatch has over 20 characters to chose from that can be played on any side LawBreakers has just four classes, with a fifth being worked on. While the characters on either side are technically different, if they are of the same class they will play exactly the same, which works surprisingly well, but apparently was not part of the initial design. “Initially we were planning on massively asymmetrical, then we realised we would need a team of 200 people to do that. And I like knowing everyone’s name and often their dog’s name. We decided that it would make more sense to be visually asymmetrical, thematic differences, but keep the gameplay symmetrical. We looked at the schedule and how long it took to get these characters in and the game would just never ever come out if we went full asymmetrical.”

Chances are that the roster of characters in LawBreakers won’t be hitting the same size as other hero shooters, but that doesn’t mean it won’t be growing. Throughout the event the team made it clear that this won’t be a case of get it out of the door and be done with it, they are focused on supporting this game significantly post launch, and even said that they would never do a console version themselves partly so they can focus on PC and any other projects. “If the game does well I don’t see it ending. When you look at the characters they usually have two weapons, a unique movement ability, the two other abilities, their own health and their own meshes. So it’s a lot of work for us to do that, they take a lot of time and effort to have in the game. One thing I can say is that if we introduce new characters or new maps everyone will be able to get it in the updates, so everyone can play together. We are big fans of CS:GO and how they have handled that kind of stuff with cosmetics. It’s the reason why CS:GO keeps going.”

As our interview time starts to wrap up the question of Cliff’s career and how much longer it will go on for comes up. Having come out of retirement to make LawBreakers he seems somewhat rejuvenated, and with someone like Cliff they are never short of ideas for new projects. “Career wise when I look at not just the game list, because I did help out with Infinity Blade and Fortnight, but my primary duties were the Jazz series, the Unreal series, Gears, and now this. I feel like if this game comes out and it does well and I were to get hit by a bus tomorrow that I’d be like ‘okay that was a good run’. But I still have other game ideas and things I want to do, whether we ever get round to making them we will see. I’d love to dabble in VR a little bit. Even though the launches have been slightly clunky from both parties I still think there is a lot of merit to the experience, even just to be with other people in VR is really compelling to me. Doing the Oculus Touch demo and seeing a virtual Palmer [Luckey, creator of Oculus] in front of me and we were firing off roman candles at each other, it was pretty magical.”

With time running seriously short there is only one thing left to ask. Where does Cliff Bleszinski keep his tomato ketchup, in the fridge or the cupboard? “Growing up I kept it in the cupboard but my wife vetoed that and put it in the fridge. Cold ketchup feels fucking weird to me. It’s like eggs overseas, in Europe they don’t refrigerate the eggs, and there’s a reason for it but I don’t remember why, but in the States they are always refrigerated. It’s those little cultural things man.”

eSports! I joined God is a Geek all the way back in September 2013 and since then have spent most of my time on Dota 2, and occasionally posting the odd review, news article or totally wrong predictions for The International. When I am not playing Dota I can probably be seen watching some kind of strange eSport or begging for more Twitter followers (@MikeStubbsy if you are interested). Aside from GiaG I am a computing student, football coach and major Apple fanboy.
MORE LIKE THIS
Boss KeyCliff BleszinskiLawbreakers

Dates announced for Lawbreakers next closed alpha
Evil West | 6 Tips to get you started
Pokemon Scarlet and Violet Legendaries | How to find and unlock Legendary Pokemon
The Devil in Me | How to keep everyone alive
The Devil in Me | How to kill everyone
Escape Academy: Escape from Anti-Escape Island Complete Walkthrough
Escape Academy Take to the Skies Walkthrough
Social Media
SUBSCRIBE
All content copyright GodisaGeek.com
Fonts by Google Fonts. Icons by Fontello. Full Credits here »
Posting....