Preview: LawBreakers is the best shooter I’ve played in ages 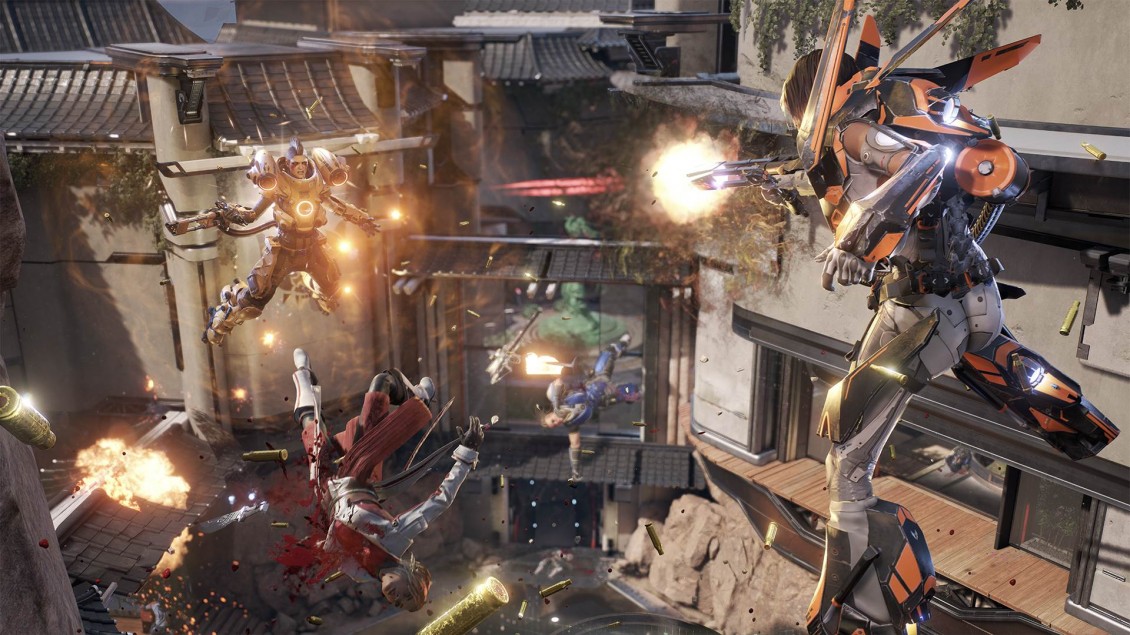 As a group of some of the finest members of the UK games press gather round a desk containing 10 PCs running LawBreakers, a shout goes around the event space that one more player is needed. As we take our seats and type in our Twitter handles there is a spare space at the end of the row, then out of nowhere Cliff Bleszinski takes the seat, loads into the warm up and proclaims “let’s do this.”

Within seconds of the match starting Cliff is racking up kills and pushing his game to the limits. It’s impressive to watch: he knows every single possibility and all the best ways of navigating the map, as we (who are playing our third game ever) are still trying to figure out just what the hell Toska-9’s Q ability does. Unsurprisingly it is Cliff that carried our team to victory, at one point getting a double kill as I was trying to get our team to hold back and go in all at once, which he just laughed off before slaughtering everyone.

It is often the case that when you play a competitive game against a developer that some of the fun is lost, because they usually destroy their opponents and do all the fun stuff, taking it away from their team, but with LawBreakers that wasn’t the case. While Cliff was the clear MVP, it wasn’t at our expense, I still had a great time playing even if I didn’t do amazingly well. Perhaps the biggest reason for this is that the core mechanics, even at this relatively early stage, feel incredible.

LawBreakers is a fast paced FPS with multiple classes; four in the build we played, but at least one more is in development. A team can be made up of any combination of the classes, each of which have their own abilities, weapons, and characteristics. While similar games may boast significantly larger rosters, having a smaller amount of variation actually helps LawBreakers, at least in the early stage as it makes it more digestible. Instead of learning how 20-plus characters work and how to counter them, you only have to learn four, and that can be done within one game if you want to. What that means is that instead of the focus being on the team lineup and the characters involved, it is actually on those playing and how skilled they are. Hard counters to classes aren’t really a thing as chances are each team will have at least one of each class so the only way to defeat your opponents is to out-play them, not out-pick them.

Out of all the classes it was the Vanguard that I preferred. Kitted out with a minigun and a ton of health the Vanguard can inflict a lot of damage and distract foes from quicker teammates who can play the objective. Perhaps the most entertaining of the Vanguard’s ability is the Q ability, which will create a massive anti gravity field, sending anyone caught inside into the air and usually disorientating them. When used correctly this can create the perfect opportunity to snatch the battery (we will get to that in just a second) and pick off some key foes, but with a high cool-down timer it needs to be used effectively.

Elsewhere, the assassin class is the quickest, but hardest to master character. Equipped with powerful melee blades and effectively a sci-fi grappling hook that can be used to latch onto enemies or the map to move around at rapid pace, she can devastate a team if unnoticed. The Titan is equipped with a rocket launcher, and can deal massive damage in a large area. When using his Q he ditches the launcher in favour of closer, almost melee level combat, and can soak up even more damage than usual. Finally the enforcer is the standard assault class with a powerful gun, a grenade, and a targeted rocket launcher for his Q.

During the event we only got to play one game mode, but were promised that more will be available at launch. As the match starts a battery spawns in the middle of the map and it is a race to see which team can get there first. Standing on top of the battery for a short amount of time will pick it up and then you must try and bring it back to your base in order to charge it up. While the battery is in your base the charge goes up, and once it hits 100% a 20 second countdown timer starts, if this timer completes then your team scores a point – with each match being a best of three. Of course if you don’t manage to grab the battery from the start you need to steal it out of the opponent’s base and take it to yours, almost like capture the flag but with only one flag that doesn’t respawn.

While it sounds a little complex it actually works incredibly well. A steal during the final 20 second cool-down is incredible, and means that no game is won until the point is officially on the board. It also means that unlike, say, traditional team deathmatch gameplay, some strategy is actually required. When on the attack you need to work together, otherwise the other team will just pick you off one by one. On defense you need to make sure you have at least one person covering every entrance to the battery room, and there needs to be communication to say where opponents are attacking from. The map itself also played a big part in that. Located within the Grand Canyon (which has been sold off to a questionable Japanese corporation), it initially appears to be a standard FPS map with three key routes through and a big open center. But once you hit that center you come face to face with one of the key mechanics: gravity. This central area has severely reduced gravity, meaning a quick jump will send you flying high into the air. This makes combat in the central column feel very different, and more difficult, and makes it way more interesting.

During one chase across the map as the battery had been stolen our battery carrier was very low on health, as he entered the low gravity area he jetted up to try and take a quicker route but an opponent clocked onto this and fired a rocket towards him. Somehow one of the devs playing with us (whether he meant to do it or not) managed to also jet up in front of the incoming rocket and take the damage saving our battery carrier, which looked incredibly cool.

It’s plays like this, combined with the tense game mode and fast pace of LawBreakers that will make this an excellent eSport; providing there is a community around it. But before we can even get to that stage players need to get hands on, and that I think is where you skeptics will be converted. Reading and watching content on LawBreakers is all well and good, but as soon as I got hands on I was blown away not only by how good it is but by how much fun I was having. Just look at how joyful I look in this picture they took at the event.

You may only care about LawBreakers right now because of the names involved with it, but I can assure you that this is one of the best shooters I have played in ages, and that would be the case even if Cliff wasn’t involved. It plays incredibly well, the game mode makes for some amazing moments, and the gravity mechanics will undoubtedly lead to some unique map design. But perhaps the biggest compliment I can give LawBreakers is that I was genuinely disappointed when our play session came to an end. Often events give you more than enough time to play, but here, even though we got a good few hours with it, I just wanted to play more. After being something I was mildly interested in before playing it, LawBreakers is now atop of my list of most anticipated games for this year.

Preview based on time spent at an event. Travel and accommodation were paid for by the developer.
Features, Previews
boss key studiosCliff BleszinskLawbreakers

eSports! I joined God is a Geek all the way back in September 2013 and since then have spent most of my time on Dota 2, and occasionally posting the odd review, news article or totally wrong predictions for The International. When I am not playing Dota I can probably be seen watching some kind of strange eSport or begging for more Twitter followers (@MikeStubbsy if you are interested). Aside from GiaG I am a computing student, football coach and major Apple fanboy.
MORE LIKE THIS
boss key studiosCliff BleszinskLawbreakers

See the new Lawbreakers ‘Between Our Guns’ trailer