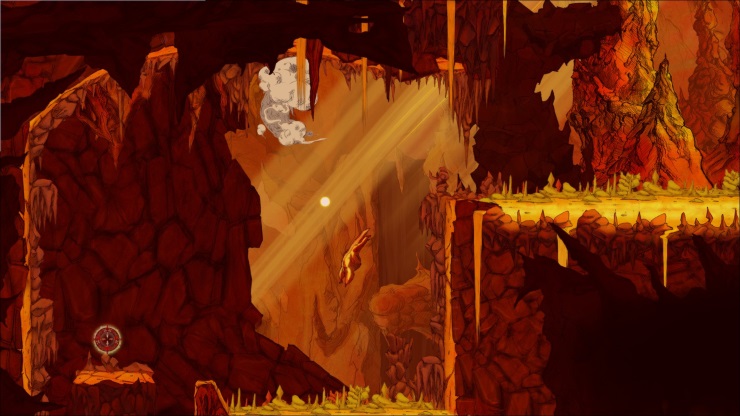 “Limbo with the lights on”. That’s what I first thought when I came to play Aaru’s Awakening. It’s a beautifully constructed game with unique otherworldly realms drawn by hand: the worlds of Dusk, Dawn, Day and Night all distinctively designed, each populated with their own types of enemies, puzzles and alien plant life. They present an exciting array of challenges, different from the ones that have come before, all while raising the difficulty level (often exponentially) as you advance.

However, this comparison to Limbo is unfair. Aaru’s Awakening is fully able to stand independently on its own merits, and any mechanics otherwise borrowed from previous platformers feel personalised.

The game follows a simple story: as Aaru, the beastly champion of Dawn, you are given the quest of travelling through the four realms to conquer Night as he threatens to compromise the balance of the world. The narrated cutscenes are well voiced and poetic, but fail to provide the game with a truly rich story. The character of Aaru also comes across as underdeveloped, and as a player, it is difficult to form an affiliation with him despite the game’s best efforts to make you feel for his cause. Regardless, Aaru’s Awakening was not built to blow players away with riveting characters or a branching plot; it was designed to capitalise on its glorious art style and mechanics to create an enjoyable end product. One thing you should know before playing Aaru’s Awakening is that you’re going to die. A lot. I don’t mean a few times per level. I mean fifty, sixty, seventy times before you even begin to get it right. It is as beautiful as it is difficult, something which I didn’t expect at all. Think Super Meat Boy, just with less blood and more flowers.

The character of Aaru has two keys skills to help him travel these twisted realms: charging and teleportation, both of which are difficult to master. Teleportation is an interesting mechanic of the game, allowing the character to warp through tight spots and navigate the dangerous settings. It can be charged to varying levels of power, and precision aiming is required to avoid over-shooting the mark and falling into a trough of luminescent acid or the trap of an unsightly enemy. It quickly becomes apparent that Aaru’s Awakening is a game built on wicked precision.

If you want any hope of beating Aaru’s Awakening, these skills are something you have to conquer early on and use while thinking outside the box. The problems you face are unforgiving, and solutions to them are brutally exact, usually with one slight error resulting in death and a checkpoint restart. Because of this, you have to be willing to spend a lot of time (and effort) perfecting your method as well as replaying sections if you are conquered by a certain enemy or pitfall. Levels almost feel like quick-time events as there is so much precision required to advance. A lot of the time, success feels like divine intervention, especially in the unbelievably difficult boss levels, but you come to realise its pure luck thanks to crazed button-mashing on your part. The difficulty is perhaps why it becomes so addictive. You feel compelled to beat it. It mimics the determination you feel when you play a game such as Dark Souls: that you must to keep going, you have to succeed. It feels like an offence to your reputation to be beaten so easily by a video game. Gameplay is rapid, hardly giving you a second to catch your breath since each deadly situation usually leads directly into another. Checkpoints feel like a massive achievement, a momentary reprieve from the ever-snapping jaws of death and an accomplishment so huge that you feel that you deserve a certificate to hang on your wall. It’s frustrating (incredibly, at points) but satisfyingly frustrating: you feel driven to go on and give it one more go.

For the zen masters among us, there is a worldwide record time counter so that you can compete with friends and other players to complete levels in the fastest time… recommended only to those with the patience of a praying mantis.

Aaru’s Awakening is a mesmerising jaunt into a world of monsters, darkness and imbalance. It requires patience, dedication and the unshakeable hand of a brain surgeon to navigate its difficult levels, but this is the factor that makes it so irresistibly addictive. The sense of achievement you get after completing a stage is euphoric and urges you onwards, all while immersing you in some beautifully constructed and unique settings. If you’re a fan of Rayman, Limbo, The Swapper or Okami, or ever wondered what it would be liked if they all hooked up and had a dark and twisted lovechild, go pick up this game.

Aaru’s Awakening is a beautiful frolic into a world of nightmares and imbalance: championed by its hand-drawn art style, compulsive level of difficulty and thrilling sense of achievement.