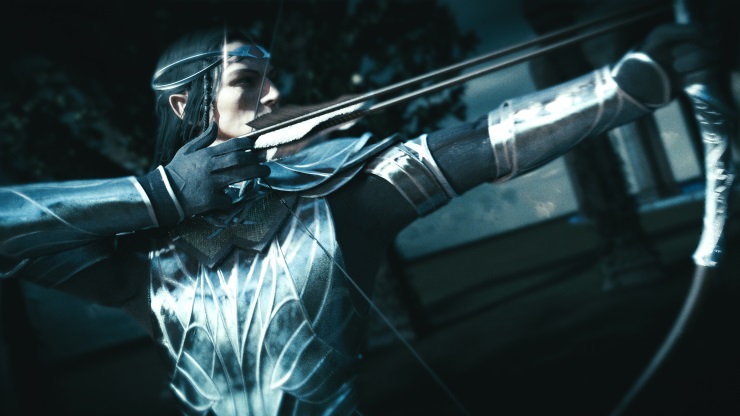 Similarly to last year’s less than stellar Lord of the Hunt DLC, the Bright Lord takes the action outside of Shadow of Mordor‘s main campaign, this time giving us a new protagonist altogether. Celebrimbor, the Elven lord partly responsible for crafting the Rings of Power, is thrust front and centre now in a ten-mission retelling of the final days of his conflict with Sauron.

As before, you begin with all the skills unlocked, which makes up for the fact that the enemies have an increased level cap of 25 and are mostly granite hard. Still, Celebrimbor is hardly a shrinking violet himself.

The Bright Lord is a lone badass with a serious vendetta against Sauron, who has betrayed him and taken his family prisoner. Armed with the One Ring, Celebrimbor is on a one-man mission to enslave the Dark Lord’s Uruk army and claim his vengeance.

The big dynamic shift this time round is that instead of being led around by various other characters, the Bright Lord is very much his own Elf. He doesn’t need anyone’s guidance aside the odd cue from Galadriel, and his focus is unshakeable. Instead of seeking out Celebrimbor’s crumbling towers, you instead capture Uruk outposts and erect the towers. Once up, they act in the same way, allowing you a means of fast travel around the (admittedly smaller) map.

Set in a time long before the main game, there seem to be more fortresses dotted around, but that’s about the only difference. Everything else, from herbs to wildlife, remains the same, to the point that, aesthetically, you’d never know you’d gone back in time at all. Indeed, the Uruk horde appears to have changed not a jot, and the Bright Lord himself plays almost identically to Talion.

The main differences are that, obviously, Celebrimbor isn’t possessed by the spirit of his long-dead self. As a result, he has no slow-mo focus when using the bow, and instead draws and shoots quicker than Talion. His special abilities are centred on branding enemies and turning them to his cause – if you brand enough, you’ll fill the One Ring with power and can then access a focus mode that makes you invisible and gives you unlimited elf-shot and executions. It’s as much fun tearing through orc scum with Celebrimbor as it was with Talion, but it doesn’t feel much different.

Also, enemies are still a royal pain when the nemesis system punished you for failure. Death comes easy, and it only gets harder every time you fall. That said, sweeping through the countryside branding Uruks, captains and war-chiefs is great fun, especially now you can summon them at will to help in a fight, or “consume” them to refill your health.

But the killing and branding and fortress-taking is a big old six to eight-hour prelude to the main event, which is in answer to one of the main game’s biggest let-downs: the boss-fight. Anyone upset by Talion’s anticlimactic fight at the conclusion of Shadow of Mordor will be pleased to know that Celebrimbor isn’t so short-shrifted. Without spoiling much more than has already been spoiled, there is a fight with the Dark Lord himself – and it’s a proper one this time. It’s also bastard-hard, so you’ll want to use everything at your disposal to tip the odds in your favour.

The Bright Lord is a good way to round off Shadow of Mordor’s DLC, finally giving us some real boss-fight closure and allowing us to play as the one character who is more badass than Talion. All in all, it’s a more satisfying offering than Lord of the Hunt and feels more worthy, if not actually essential, but the increased difficulty and shift of focus means it’s more suited to veterans of the main campaign than newcomers who have yet to finish Talion’s story.

Celebrimbor is a badass.
Branding enemies never gets old.
A proper boss fight!

A more robust offering than last time, and a more essential addition this time around, The Bright Lord is a solid way to top off Shadow of Mordor's Season Pass.