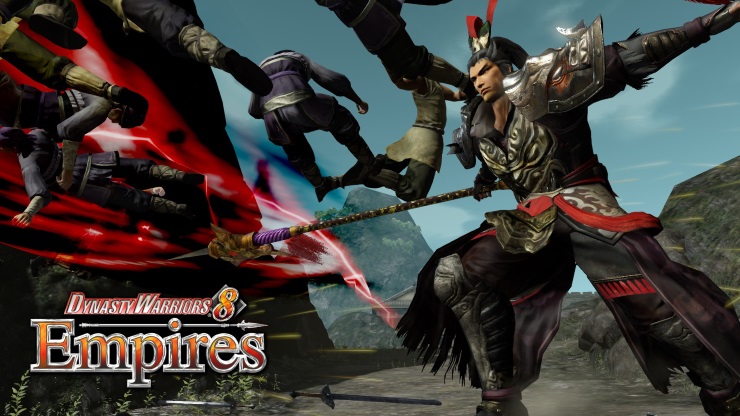 At its core, it’s easy to see Dynasty Warriors 8: Empires as just another game in the Warriors franchise. Running around a battlefield killing hundreds of identical enemy troops? Check. A cast of characters so large it’s nigh on impossible to keep track of? Check. Primarily using the square button? Check. But take the time to look a little closer and you’ll quickly see that Dynasty Warriors 8: Empires is so much more than this.

While the standard Dynasty Warriors titles have a traditional campaign, the Empires spin off replaces it with a turn-based strategy overlay, not unlike the Civilization games. You take turns, each representing a month, to attack neighbouring kingdoms, draft more AI troops, heal your officer and much, much more.

Exactly which actions you can perform depends on your rank within your kingdom. Common officers can launch raids on your neighbours but must listen to higher ranks during battle, while Prefects gain full governance over their own region, and Rulers oversee entire kingdoms. This may sound simple, but it is overlaid by political intrigue. Every six months the Ruler of a kingdom holds a War Council, during which the next area to invade and the time scale to do so are decided upon. If you are a high enough rank – and in good enough standing – you may bend your leader’s ear to your way of thinking, pushing the invasion back so you have more time to prepare, or calling it off entirely. Of course if you are not content to listen to somebody else you may can choose to leave, taking yourself over to another kingdom, or fully betray your Ruler and secede with the region he has left you in charge of. You may even aspire to rule yourself, plotting your way to the top by forging friendships and alliances, or content yourself by playing as a mercenary, fighting for the highest bidder.

The options are endless, and no two games will be the same – even in a campaign ending after 50 years (600 turns), or when one kingdom conquers the entire map.

The strategy elements trickle into battles as well. Depending on your rank, you can give – or must listen to – orders in the battle, with a good performance bestowing you with greater titles and strengthening friendships. It means you can influence the far side of a battlefield without traipsing all the way over there yourself. Likewise you can reinforce bases before a battle, making them harder to capture, or using them to provide bonuses to attack and defence. There are also stratagem cards you can play during a battle, ranging from power boosts and the placement of archer turrets to grand stratagems that can take over a base instantly but require officers to withdraw from the fray for a few minutes beforehand. It makes you feel that you are a cog in a greater machine, rather than just one man on a battlefield, something other Warriors titles have suffered from.

Combat is largely the same as ever, but that isn’t to Empires’ detriment. Your basic attack is mapped to one button, but various combos are available depending on timing and the special attack button. Weapons handle differently too, with two equippable at the start of a battle, that can be switched between on the fly. There is also a levelling system based on merits earned in battle and by completing objectives in the campaign screen – win one raid, for example – which increases your officer’s attack and defence.

Graphically Empires is pretty, although The Order: 1886 won’t be worried. Officers are the highlight, full of detail, but AI soldiers are masses of clones, which is a shame. The standard Japanese voiceovers come out of the Dualshock 4’s controller speaker – a touch I personally like – and are supplemented by English subtitles. When Dynasty Warriors 8: Empires works at its best, it’s a brilliant game, with so much depth it can swallow all your gaming time. It should also be the perfect entry point for gamers who don’t believe that there is much more to a standard Dynasty Warriors game than button bashing. The problem, though, is that Dynasty Warriors 8: Empires is almost impenetrable. Tutorials amount to a few lines of text the first time you try something new, but there are so many different aspects to governing, even when you’re a lowly officer with little responsibility, that it is far too much to take in and keep track of. Fatigue, for example, which effects an officer’s performance when battling in quick succession, can be cured by using a turn to heal, but there is no bar to track how fatigued you are.

A similar problem affects your friendships with other characters. When choosing who to hang out with in the interact menu you can see your friendship ranking with each character, but when choosing who to take into battle with you it isn’t there, meaning you have to mentally keep track of who you like, which, given the constant cycle of changing officers between kingdoms, is impossible. There are several other problems as well. Once you know your next invasion target, it makes sense to weaken it with a raid, meaning you then play the map twice. A newly conquered territory will be weak though, ripe pickings for another kingdom to take, meaning a third straight battle on the same map, albeit with the bases reversed, and a fourth when your ruler decides to take it back. Frustrating isn’t the word. Then there are the times that a battle will end for no apparent reason, and the ones where you inexplicably can’t attack a neighbouring kingdom. The more time you spend with Empires the more sense all of this makes, but getting to that point can be infuriating.

Dynasty Warriors 8: Empires can be a great, deep strategy title tied in with some excellent third-person combat, but only hard-core fans of the series will be willing to break through the steep learning curve to reach that point.

Plenty of depth.
Satisfying combat.
Seriously a lot of depth.