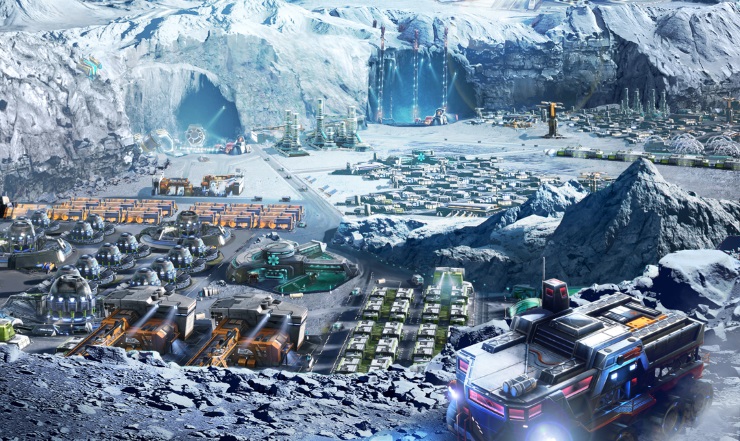 Roslyn Industries is a conglomerate that deems it necessary to oversee its workforce with a watchful and caring eye, making sure that nobody struggles with the pressures of revolutionising the world we live in. They are a multifaceted corporation that have many ideas for a better future and a whole host of production lines in all of the latest technologies, aimed at building the perfect world for the next generation. If Anno 2205 was a real representation of running a successful economy through a powerful organisation, then this would be the kind of mission statement I’d cement in every employee’s mind. Beneath the corporate bravado, you are constantly trying to keep your head above water, providing food and warmth to an ever-expanding workforce with constant, changing needs, competing with other massive businesses that want you to fail, all while trying to be the first company to colonise the moon.

Anno 2205 takes place 135 years after the events of Anno 2070, and technology has advanced greatly. You are tasked with building a highly successful corporation from the ground up, making tons of money and trying to combat the threat of global warming. Throughout the main game, you will take your company to three different biomes: temperate, arctic and lunar, with the goal of creating different production lines and trade routes among the different cities you’ll end up overseeing in each climate. As you progress though the story, you’ll compete with a whole host of different companies that all want to bypass you in terms of revenue and fame, but it doesn’t feel like much of a threat as you build towards a brighter future, mainly due to the amount of handholding you get given throughout. As you progress through Anno 2205’s campaign, you’ll have different members of your organisation and the Lunar Licensing Program all telling you what your next course of action is, meaning you never really have to deal with the stress or pressure associated with big business. Your main guide will be Sam Beaumont, a supervisor on the Lunar Licensing Program’s council. From the very start, she’ll give you instructions of what to do and the best way to do it; for example, you need to bring in a workforce by building residences for them, but at the same time they’ll need food and water so you’ll have to make sure that the correct factories are constructed so these basic human rights are adhered to. These typical ideas are present in most RTS games, but they still need to be maintained, especially as your employees can be rather demanding; as time goes on, they’ll start to ask for embellishments like rejuvenators (a drug that tries its dandiest to replicate traits of immortality), and a more luxurious meal than the bland organic rice.

With each biome come different challenges that push you to think a little differently. I settled in the temperate region of Cape Ambar (mainly because it sounded most like Jurassic Park’s Isla Nublar) which is the most common kind of biome to almost all human life, so there weren’t any variables I had to adapt to. However, when I had to build part of my organisation in the arctic, I couldn’t just build homes for my employees anywhere. Because of the freezing cold temperatures, they had to inhabit living space within a close proximity to one of my power plants or aluminium mines as they give off plenty of heat. Likewise, on the moon I needed to build shield generators for protection, as meteorites and space debris can threaten everything you’ve built. These slight changes to gameplay will help to add some modifications to how you think, and add a new layer of frustration that wasn’t there in the warmer climates of the temperate provinces. Throughout Anno 2205, you will be called on to take part in military missions that are part of a subplot about terrorism, but on the whole they simply hinder progression of the game. I found them to be poorly constructed and repetitive; when all you want to do is make sure you’re the first one to reach the moon, The Orbital Watch and their need to sabotage your goal dumbs down your experience with these out-of-place mini games. Whether you end up liking these missions or not, the story is bland and underwhelming to say the least. It isn’t terrible, but I would have preferred to just play without one.

In terms of its look, Anno 2205 offers beautiful layers and a wide colour palette that help to bring the different climates to life. The designs of the buildings are surprisingly detailed and when you’ve built a large city rich with industry, your creation really does feel alive and operational.

For the true strategists amongst you, this may feel a little too vanilla; if you’re coming into this expecting Cities: Skyline or even SimCity, then you may be disappointed. Anno 2205 isn’t particularly tough, especially if you play on the standard difficulty. The basics at the heart of Anno 2205 share more of a semblance to mobile games like Clash of Clans or Game of War than anything else. It is simple in operation and progression, but offers a challenge that will certainly keep you hooked for a while.

Easy to get to grips with.
The three different biomes offer different challenges.
One of the best looking strategy games out there.

Constant handholding can hinder the experience.
Military missions feel out of place and redundant.
The story is rather dull.

Anno 2205 offers plenty of enjoyment, but may not appeal to the hardcore strategist.