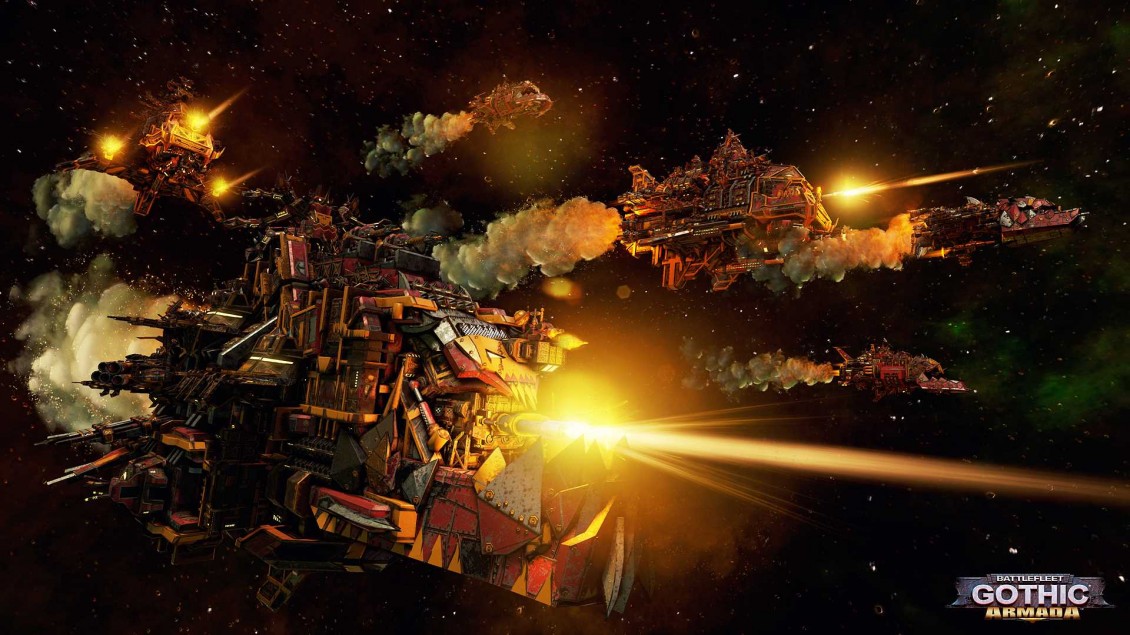 Back in 1999, Games Workshop published the Warhammer 40,000 expansion Battlefleet Gothic, enabling players to wage space warfare between their chosen factions. Unfortunately for fans, it was discontinued in 2013 and never really replaced. Step forward Tindaloss Interactive with a virtual (and pretty accurate) take on the original’s formula.

The game sees you as an Admiral in the fleet for the Imperial Navy. The forces of Chaos under the leadership of Abaddon the Despoiler are growing in influence in the Gothic sector and you need to force them back. As well as this, Ork and Eldar pirates are causing problems using the *ahem* Chaos to get away with more plundering and looting than their normal activities allowed.

Unlike many RTS games, Battlefleet Gothic: Armada sees your Admiral controlling things from afar, issuing orders to his ships, while captains maintain order on the vessels. What this means is that if things go wrong and you fail the mission, it isn’t game over. In fact the passage of time moves on, and the loss is felt throughout that sector of the galaxy. Planets and systems are lost and gained in what amounts to a huge galactic chess match.

Before each battle you’re given a summation as to the abilities of your enemies, for which you will need to plan your fleet accordingly. Orks are brutish and rush in headlong, looking to ram your vessels to cause heavy damage, while the Eldar have small, manoeuvrable but fragile ships. The crafts you choose have a point value (which in truth feels a touch arbitrary, but it’s faithful to the original table-top game), and each mission gives you a points allocation to use to put your fleet together. Making sure you pick the right ships for the job is essential for success. Considering the size of the ships the battles themselves are rather small scale; most of the time you’ll have units in the single digits, with enemy forces not much bigger, and you’ll divide your forces to deal with potential threats on multiple areas of the map. The good thing about the vessels is that they feel immensely capable: give them a target, a part to focus on (engines, generators, weapons, etc.) and you will feel like you can go off to your other set of units to ensure they’re doing what they need to. You’ll need to check back and forth to make sure things haven’t gone tits-up, but generally you’ll be ok, until one group has done their job and can then come over and help your other team out.

There’s a lot of flexibility here, with ships upgradable using renown earned from successful (and unsuccessful) missions, you can add new weapons or upgrade old ones, increase your shields or engine capacity, and also upgrade the crew on board as well; as far as customisation goes it’s really in-depth.

In battle the game never looks less than lush, with lots of fine detail and texture work on the ship models and weapon effects; sound is good, with lovely music, but some rather dire voice acting. The menus are nice too, albeit with one UI problem where you cannot go back to the main galaxy hub after selecting a mission. I only found this out after one particular mission failure in which I lost my entire fleet, when I tried to start the next mission I had no ships to choose from and couldn’t go back. I had to exit the game and re-open it to be able to fix my ships before I could actually take the mission on. There’s also a problem with the view during battle. The Field of Vision is much too constrained and you can’t zoom out far enough to get a decent look at your surroundings, meaning you constantly need to shift the camera all over the place. This ties into the other problem I have: many of the UI elements you need to pay attention to are in the very edges of the screen, and trying to use these quickly results in you moving the camera to places you don’t want it to be. I understand that hotkeys negate this to an extent, but in the middle of a hectic battle it’s easy to forget and frustrating when it happens.

Tindaloss Interactive has done a good job bringing Gothic Armada into the digital space, and has created a title that people unfamiliar with the genre and subject matter will still feel welcome to. There are some small niggles, but there’s a great feeling of satisfaction when you manage to achieve a victory, and a desire to set the record straight when you fail.

Despite some minor frustrations Battlefleet: Gothic Armada is a fun RTS that isn’t too unwelcoming to people new to the genre.