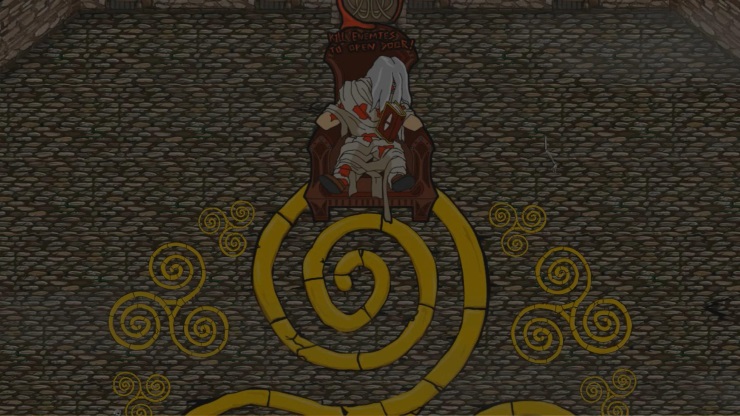 Another week and another roguelike game steps into the fray. This time we dive into Eternal Step, a game that is obviously indie and recently hit the greenlight on Steam and now sees its release on the platform. Eternal step is a game of action and prides itself on being difficult. Its own description on Steam contains the promise that “Bosses will crush you.”

I was intrigued by this and the fact that it advertises endless, randomly generated floors, so dived in with an expectation of something on par with Dark Souls in difficulty, with a feel of Binding of Isaac. I was a little disappointed to say the least. The game is definitely difficult, but not all of this difficulty is organic. Unfortunately, Eternal Step suffers from fairly floaty movement and controls. Character movement across the map doesn’t feel tactile and grounded, attacks have unpredictable animation “collision” boxes – meaning that an attack you expect to hit probably won’t – and character-to-world collision is a little unpredictable at times. This causes crucial attacks to miss unexpectedly and movement to be stifled, causing your death. Overall these are the annoyances that make a challenging game frustrating, rather than a challenge you’d like to get back to again. The combat mechanics are interesting, though, since each weapon can hold a maximum of two different abilities that offer variations in your effectiveness. For example, having a large weapon means that your attacks are slower, but with the “charge” ability slot on your weapon, you can clear out waves of enemies with ease. This makes for a satisfying experience, when you charge up your attack, unleash it, and the whole room’s worth of enemies that you’ve been rounding up are turned to a pile of gore. There’s something oddly gratifying about that.

Handling of loot, where you manage the abilities of your items, is interesting in Eternal Step. During a floor, you loot cards from defeating enemies or opening chests, and these are held onto until the end of the floor when you “turn” the cards over to reveal what you got. You can either swap out what you just received, or you stick to what you already had. Additionally, if the card gives you a weapon, you can do one of two additional things with it: take the ability and apply it to your current weapon, or store the ability for later use.

The floors are truly randomly generated, though. The layout doesn’t change a great deal, but what populates a room most definitely does – which is both good and bad. For instance, I’ve had several occasions playing through this game where a room has absolutely no danger at all and counts as a full room when you run through to the other end. It’s random in the truest sense of what spawns and what you encounter. Enemies do, however, get increasingly difficult – which is obviously something you want from such a game as this. Is it enough to hook you into playing more? Probably not. Aesthetically, Eternal Step is not very appealing. You might assume that this is a commentary on the graphics, but that isn’t the point I’m trying to make; I’m talking about art style and presentation. More like the last touches of polish that adds a little bit of class to a game despite its graphical limitations. For example, Eternal Step supports a gamepad with free diagonal movement but there are no sprite animations for diagonal movement. Attacks are not telegraphed clearly enough, and hitboxes of the attack arc don’t align to the sprite animation, causing a disparity between what the eye sees and what the engine handles.

Unfortunately, Eternal Step suffers from being “too indie”, if that’s even possible. There are too many things that can cause your death outside of your ability – or lack thereof –and this is one of the most frustrating ways to die in any game. It feels unfinished as it is currently, with too many gaps in presentation and gameplay. It’s a good concept to build upon, but it’s not worth the time and money to play it unless you’ve got a small gap to fill between other, more noteworthy titles.

A decent concept and interesting loot system can't save this indie action title from mediocrity.

Podcast 465: Guardians of the Galaxy, New World, House of Ashes