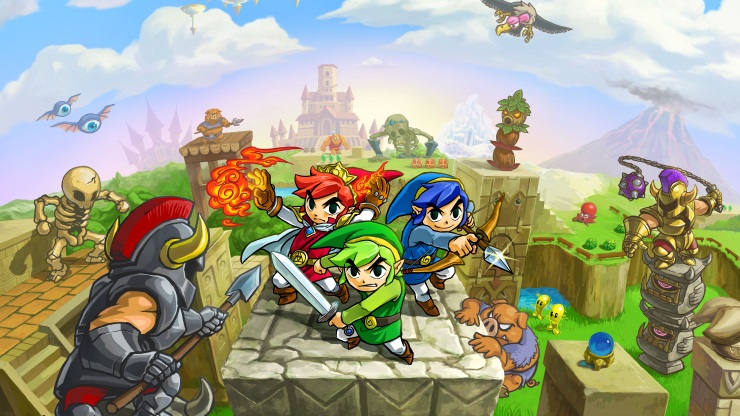 For those who are crying foul over the possible dilution of the Metroid series in the form of the upcoming Federation Force, can I just point folks in the direction of The Legend of Zelda, particularly the Four Sword series of Link-based spin-offs. A multiplayer Zelda game is something we all thought was a bloody stupid idea at the time, but it turns out that when Nintendo attempt to turn one of their beloved IPs from a single player experience to a multiplayer one, most of the time they turn out pretty damn well. While the Four Swords series may have been tethered by the need for multiple items of hardware and copies of the games themselves, they have always been these wonderful vertical slices of classic Zelda adventuring; only in these instances, you could enjoy the whole lot with a few nearby friends.

And thus, Tri Force Heroes is a sort of update to Four Swords, albeit removing the fourth player from the equation. It looks and plays much like the 10/10 rated A Link Between Worlds, but this time around, the main gimmick is that three “Links” are in play at all times, and can pick each other up, throw each other or even jump on each others’ shoulders in a “totem” to solve a few height-based puzzles. Sometimes you may be called on to hit a switch or an enemy that’s higher than one single player can reach, at other times you may need to throw your fellow avatars over gaps and on top of higher platforms. There are several other ways that having three characters impacts gameplay, and it’s clear that a lot of thought has been put into how this mechanic can be used, as well as how the levels are designed around it. Outside of the new Totem mechanic, there is one other gimmick: as you’ve no doubt seen, Link can swap his iconic green tunic for a whole wardrobe full of new threads, and it’s the acquisition of these garments that make up quite a large side-quest in itself. The citizens of Hytopia, the world in which Tri Force Heroes takes place, are very much mad about fashion, and provided Link can find the right fabrics and materials, and can also stump up enough rupees, he’ll be able to craft all sorts of outfits. These looks are more than just for show, with each one offering its own abilities and enhancements.

While these new threads have their uses, they are in no way essential to the completion of the game and are more of a way to encourage you to replay levels in order to obtain some of the rarer items. Compared to the usual Zelda formula, the approach to item acquisition is very different. Each set of areas is assigned three different items, one for each of your three Links (as there are always three, even in single player) and these items are found almost immediately upon starting the first area of a level. You might start a level with three Boomerangs, or two Magic Hammers and a Bow, etc. You’ll be using these items, along with the your Totem moves, to clear each area.

For those who love a good Zelda dungeon, Tri Force Heroes is right up your street, almost entirely consisting of dungeons or dungeon-like areas, all brimming with nasty beasts and tricky puzzles. Throughout each of the eight thematic lands of Hytopia, there are four levels, each containing four areas that must be completed in one sitting. Finish the four areas and you’ll be offered one of three chests to open, each containing a random fabric or material from a predetermined set for each level. Obviously, some items are rarer than others – but once you finish a set of four areas, you can replay that level with particular challenges selected, from popping all the balloons in each area, to finishing all four areas in a very tight time-limit. Some of the rarer items are much more common in these areas, encouraging you not only to replay levels, but also to challenge yourself further.

With very little exploring involved and little in the way of narrative, don’t let the seemingly simplistic nature of this game fool you, for there are some excellent item/height-based puzzles throughout, with a few that genuinely had me stumped for a while. This is almost a typically old-school Zelda, with the player needing to use their noggin and a bit of common sense to get through every area without losing all their lives (yes, there are lives in the form of fairies, of which you start with three each level). You won’t get many hints on what to do, if at all, but as is now-tradition, Nintendo have offered a helping hand, allowing you to skip areas in return for a life – but you’re really cheating yourself by doing this. If the constant presence of three Links didn’t already scream this out to you, Tri Force Heroes was built for multiplayer and, while a single-player offline mode is joined by local multiplayer, it is the online multiplayer where most of us are likely to get our fix. Essentially, you can play offline on your own, or you absolutely have to play with either two other local or two online players. If you just have one friend, you won’t be able to play as just the two of you. Offline players will need to swap between their doppelgangers by touching their icon on the bottom screen, while in online mode, these icons are replaced by a set of buttons for communicating.

These buttons offer simple emotes that range from a thumbs up, to an “Over Here!”, and they work as long as your online partners are willing to actually use them properly and listen. I played quite a few games with random strangers online, and luckily I ended up playing with some good players, and even using these ambiguous commands, we were able to help each other and act as a cohesive unit. When in a Totem, the bottom player moves around, the middle player can’t do anything except throw the top player (which does have uses), while the top player is able to attack and use their item. It takes a bit of getting used to, and your enjoyment in this mode is of course defined by who you’re playing it with – but, I did have a lot of fun, and I will definitely be hitting the online mode a lot more when there are more players online. However, I do sort of recommend that you play through levels in offline single player before tackling them with other players – unless you’re lucky enough to have two other friends with 3DS’s to enjoy “local” multiplayer with, so at least you can actually talk to each other instead of relying on the emoticons.

This is not an epic Zelda adventure, full of exploration, and magical moments, but for this game that isn’t the end of the world. You can easily dive into a set of four short dungeons for 15-20 minutes, and feel like you’ve made progress in your quest. There’s a lot of gameplay here for completionists as well, and while you’ll see an end to the story in a couple of weeks, there’s something rather compelling about trying to track down those rare materials to make an outfit that lets you swim in fire, or shoot three arrows at once. Put simply, for as long as Tri Force Heroes grabs your attention, there’s enough to see and do.

Something that did disappoint me is Hytopia itself, a very small settlement that is quite bare compared to what you’d expect in a Hyrule town. Don’t expect much interaction with NPCs, and certainly not much in the way of extra town-based sidequests.

At the end of the day, this is a bite-sized, multiplayer Legend of Zelda game, and for most of us that’s enough of a reason to pick this up. But even with the focus on multiplayer, this is an adventure that is just as enjoyable for lone heroes, especially for those who fancy a challenge.

Even with the focus on multiplayer, this is an adventure that is just as enjoyable for lone heroes, especially for those who fancy a challenge.