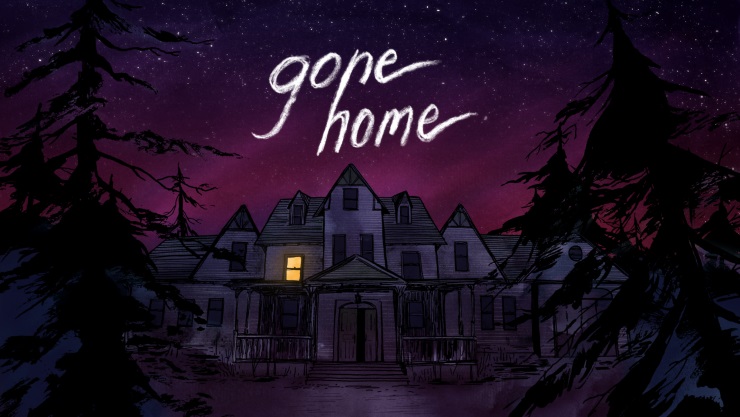 Originally released two and a half years ago, Gone Home was, by quite a distance, my favourite game of 2013. Despite that, I’ve never gone back to it as I felt as if it was the type of experience that should be savoured, played once and not tarnished by multiple playthroughs. So I never played it again. Until now, that is. Playing it again on console truly made me realise just how good it is. It’s a masterpiece, not just in its famed storytelling, but in its clever game design as well.

You take on the perspective of Katie Greenbriar, who’s just got back from a year of touring across Europe. She reaches her family’s new Portland home, for the first time, and finds it completely empty – her mother, father, and sister (Sam) are nowhere to be seen. As you enter the secluded mansion, with a monstrous thunderstorm raging outside, the eeriness and dread of this great, big empty house immediately becomes apparent. The lights are all off, doors creek, floorboards suggest someone is in the house, all the while the wind continues to howl and the thunder continues to crash. It creates an immensely tense atmosphere that immediately conveys that something terrible has occurred. The atmosphere created is similar to the beginning of a lot of horror games, the building tension before the hideous creature finally makes his first appearance. So much so that I wouldn’t enter a new room before switching the light on first, and I would shuffle slowly around every corner just in case a werewolf was lying in wait to devour me. When the jump scare (one of the best jump scares in anything) finally does get you, you will scream. As Katie explores the house looking for clues as to the whereabouts of her family members, you’ll learn more by reading letters, invoices, posters, notes, and postcards. Stories of failure, marriage, family, parenting, work, losing touch are all in there if you look carefully, but Sam’s story, which is also told by wonderfully acted diary entries, is the main hook of Gone Home. Without spoiling for the uninitiated, I will say that Sam’s story is beautifully told and if you have a heart you will definitely well up on at least three occasions. In the time since I last played it I’ve left home for university, and have a younger sister still at home. Playing as Katie really related to me this time, in a whole different way than it did originally. She’s been away for so long and so much has happened that she’s missed, she could have helped her sister on so many occasions but wasn’t there. As an older sibling, that feeling of powerlessness, of being too late, and the feeling of regret that you weren’t there for something is really, really shit. Gone Home absolutely nails it.

While the narrative already has its well publicised plaudits, I feel as if its game design is quite underrated. Firstly, any player could go right up the stairs when they first enter the house, which would mean they’d get a lot of the story out of sync, but yet the the mansion is designed in such a way that players went left first. A cleverly opened door and a rough, distant sound attract the attention. My personal favourite example is more of a little joke: as I mentioned, the house is quite scary when dark so I turned every light on, and you can bet it remained on when I left for a different room. With all of downstairs illuminated I finally climbed the stairs and the first thing I came across was a cork-board with some notes pinned into it. One of them read: “Sam, stop leaving the lights on you’re just as bad as your sister.” I had to stop for a minute and just think “fair play, you clever bastards.” They knew that I would be frightened when exploring the house and would leave every light on, they then took the piss out of my cowardice by naturally making it an aspect of Katie’s character. This all makes the game design seamlessly weave into the narrative, making for a brilliant experience. Gone Home is the pinnacle of ‘show don’t tell’. For instance, on the minibar there’s an empty bottle of vodka and several glasses carelessly discarded. After a little digging you find a letter which explains why someone may have started binge drinking. It’s brilliant design like that that sets it apart from other games of its ilk – the sense of exploration and discovery by your own hand. It may only take place in one big house, but it feels more real than countless other sprawling worlds in videogames.

My only real criticism is that, due to the positioning of the camera, it feels as if Katie is about five foot tall. She may very well be exactly that, but when a cupboard in the hall was nearly reaching my neck it breaks immersion the tiniest bit. That soon got ignored as the story began to unravel itself. Personally, I enjoyed Gone Home a lot more on the PS4 than PC as it feels a lot better to play with a controller rather than a mouse and keyboard, and it also runs perfectly on the console.

Gone Home is a masterpiece, and one that after playing again after many years and changes in my own life, hit me in a lots of different and unforeseen ways. If, for some reason, you haven’t played it yet, then you owe it to yourself to do so.

One of the best games of 2013 is finally out on consoles. If you haven’t done so already, you owe it to yourself to experience a beautiful story and some very clever, but understated, game design.

Tacoma has a release date

Gome Home for consoles has been delayed in Europe and Australia