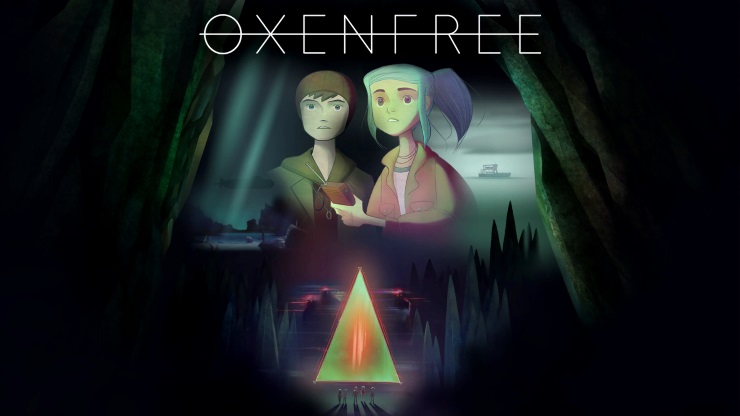 Oxenfree is a strange game to review. For starters, its overall gamey-ness is limited, and it feels like more of an interactive TV show than anything (which, apparently, it may soon become). Before you shake your head and click away, it’s worth first noting that regardless of its limited reliance on player skill, it delivers an exceptionally captivating, creepy, and compulsive experience.

It centres on Alex, a teenage girl who travels to the mysterious Edwards Island for a beach party one night along with her best friend Ren, new step-brother Jonas, token bitch Clarissa, and pretty little tag-along Nona. Intending to spend the night drinking under the stars until they forget how they got there, the party of five find their plans scuppered when Ren convinces Alex to put one of the island’s creepy urban legends to the test and attempt to tune into a strange frequency using a pocket radio. What follows is an (occasionally) intense psychological thriller as Alex and her friends are drawn into a dark mystery surrounding the island’s past. As the player, you’re mostly required to make Alex walk to places, interacting with a small number of environmental features and focusing mainly on the dialogue. Oxenfree features one of the most subtle and sophisticated dialogue systems I’ve ever seen, which presents you with one to three responses that affect the storyline in ways both apparent and unexpected. Similarly to Until Dawn, seemingly innocuous choices made early in the game can have significant repercussions later.

While there’s limited action, it’s the interplay between the characters that stands out and drives Oxenfree forward. The scripting is a little hit and miss, in that while it’s entertaining and well-acted, it suffers the same issues as a Kevin Williamson or Joss Whedon script, whereby the characters sound clever and cool and ironic and hip at all times, but very rarely like real people. Their often blasé attitude towards occasionally horrific events can downplay the horror potential to Oxenfree’s detriment, because when the characters are laughing and joking after witnessing one of their number apparently commit sudden and shocking suicide, you’ll struggle to really care yourself. As a result, you may become more invested in the mystery than the characters.

The core mystery is wonderfully presented and seamlessly weaves Alex’s battle with her personal demons into the narrative. The characters do so much more than simply fill the cliché requirements, with enigmatic bad boy Jonas clashing perfectly with slacker best friend Ren in a tussle for Alex’s affections, and Clarissa becoming more and more sympathetic as her backstory is steadily revealed. The primary gameplay mechanic revolves around the radio, which you can pull out by pressing RT. In certain areas you’ll either be able to tune-in to random snippets of radio shows, information about the defunct military base on Edwards Island or, at specific moments, open a window to another world. It’s from this other world that Oxenfree’s antagonists hail. Whether they’re malevolent spirits, ghosts from the past, results of a secret government experiment or alien invaders isn’t revealed until the slightly hurried final hour, but the mystery will keep you guessing throughout, particularly when they choose to make an appearance to test you with unexpected questions while the lives of your friends hang in the balance. It’s at these moments that Oxenfree becomes genuinely heart-pounding, and each one forms a significant tentpole to hold aloft the less-exciting, but equally interesting, walking sections.

If you miss a dialogue choice or answer “incorrectly”, it can have dire consequences, but quite often the choices are so morally blurred that you won’t know who you’re going to upset until you answer and see their reaction – or, worse, feel the repercussions way down the road. Oxenfree is superb at hiding its mechanics, and great at making you feel bad for answering a question honestly. If there’s any real complaint against the dialogue, it’s that it often occurs during long periods of walking, so while it’s nice to get to know the characters (you can choose to spend the majority of the game beside either Jonas or Ren), you won’t be doing a whole lot else while you do.

The art style is utterly mesmerising at times, combining sharp, angular edges with soft pastel colours and using its light and dark dynamic to maximum effect. Frankly, it’s often beautiful. A strong attention to detail helps greatly, but you’ll need a keen eye to spot the various collectibles, or identify the piles of standing stones that mark a signal anomaly you can tune into and unlock. While the incidental score is perfect, it’s when the tension mounts that the music comes into its own, pounding in your ear drums while assailing you with sounds straight out of your nightmares. When it dials the atmospherics up to eleven, it really is exceptional.

It’s early days yet, but this is certainly the first noteworthy game of 2016. It’s a powerful and emotionally arresting tale that doesn’t ask much of you other than that you pay attention and invest in its mystery. At times, the constant walking from A-to-B can’t even be saved by the stellar dialogue system, but more often than not you won’t mind an extra few minutes’ hiking to get to the next clue. How you advance the story is entirely up to you, but whether or not you dive back in for a repeat performance will depend on your tolerance for low-key scares and confident direction over big-budget dazzle.

Note: Another member of staff also played through on Xbox One, and suffered hard crashes multiple times in his playthrough. It didn’t ruin the game, but we felt it was worth noting.

Lots of walking.
Script tries a little too hard to be cool.
Not much to actually do.

Oxenfree is a haunting, emotionally-charged mystery that spreads its shocks a little too thinly, but still manages to deliver an engaging, memorable experience.