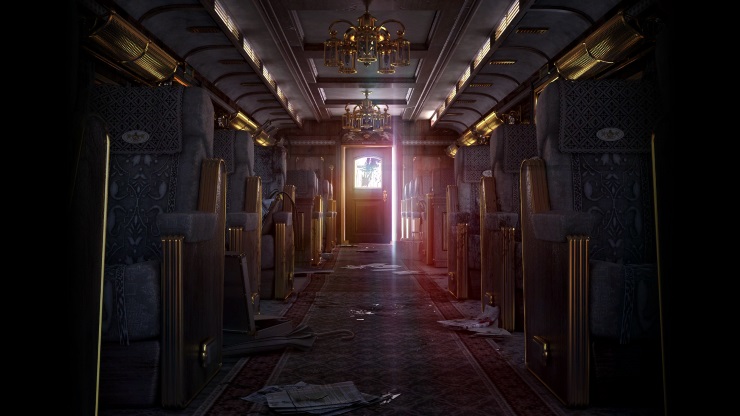 Back in its heyday, Resident Evil was a prime example of survival horror in its purest form. You were forced to survive in the horrifying environments with next to no bullets and health, with no idea what could be lurking around the next corner. They nailed jump scares to perfection, and with its static level design, you would always hear something before you got to see it – the terrors of what you couldn’t see were by far the most unnerving and shocking. Jumping back into that era and environment was exhilarating even if a little terrifying, but it was also interesting to see if a game released over 13 years ago still had the relevance and affect as it did back then.

Resident Evil 0 has all of the bombastic storylines and oblivious humour as any game in the series, but it still managed to scare me on more than one occasion. I had forgotten how well the game managed to provide those moments where a zombie or two would suddenly appear from a locked freezer or behind a door and you were expected to act fast and either take them out or run away. You are always encouraged to think; the element of survival never feels more prominent when faced with these decisions, and Capcom’s choice to deviate from this tried and tested formula as the series progressed was always a bizarre one. The most obvious improvement to the game is how much detail has been put into the graphics. Its HD makeover has done the game a world of good and within minutes of playing you can tell that a lot of hard work has been put into it. Watching the heavy rain hit the windows or the light glare into the carriages in sporadic spurts as you travel through tunnels is vastly superior to the original; the paintings and statues you see wandering around the training facility are also worth mentioning because of the amount of detail put into their textures and palette. Some of the cutscenes suffer from shading issues, and the same blur of the GameCube is still prevalent in certain parts, but not enough to make an impact on the overall experience of the game.

You can now play in 16:9 widescreen, and rather than the image being stretched, it has been perfectly adapted to fit modern TV screens and monitors. If you’d prefer to play the game in its original 4:3 ratio, then you can do that instead. Sound has also been drastically improved, supporting 5.1 channel output and giving you the option to change different dynamic presets in the menus to match your own preferences. It’s evident as you play through the game that these improvements have been made; every zombie’s groan or crow’s caw roars with great clarity and with Seiko Kobuchi’s exceptional score heightening tension and atmosphere, Resident Evil 0 still stands up today as an audio delight.

The controls have had an overhaul too. Those tank controls of the original are still there if you want them, but there’s an alternative now, just as there was with the previous re-re-make. You can now use the left stick to move Billy or Rebecca around freely which feels a lot better, but on more than one occasion I kept cutting back and forth between areas due to its awkward maneuvering. Sometimes, pressing forward on the left stick means you’ll go backwards as you pass on to the next area which breaks up play and can become frustrating. That’s a facet of older game design that happens less now, but this is an old game made new, so it’s worth noting.

I’ve also become so used to holding L2 to aim and R2 to fire in video games and with its absence in Resident Evil 0, pulling R2 to aim and cross to fire doesn’t feel right. There isn’t an option to change to a more familiar control system and with all the other alternative control patterns you can choose from, this never figures into any of them. Even opening the map or accessing your inventory has been given strange button choices. It feels unnatural and awkward, especially when you’re panicking because some zombie dogs have just jumped through a sodding window and you’re messing about with a map instead of blowing their heads off. Once you complete the main campaign, you’ll unlock Wesker Mode. It’s a nice addition and if you loved playing the game, you’ll now get to do so with series’ antagonist, Albert Wesker. Instead of playing as Billy Coen, it’ll be Wesker dressed in his attire from Resident Evil 5, complete with glowing red eyes and a whole host of special abilities. All the cut scenes have been changed to feature Wesker, and even Rebecca has a new outfit which is reminiscent of the one Jill Valentine wears in RE5.

Resident Evil 0 is a reminder of how great the series once was complete with a whole host of improvements that make it well worth returning for. If you’ve never played the game before or if you’ve never stepped foot in the franchise, this is the perfect place to start. It may feel a little dated at times, especially if you’re used to horror games like Until Dawn or The Evil Within, but this series played a major part in their creation and without Resident Evil, these wouldn’t exist.

The HD visuals are great.
Sound is improved.
Wesker Mode.

The controls don’t feel natural.
Some cutscenes can be blurry and suffer from shading issues.
The game feels dated in parts.

Resident Evil 0 looks and sounds better than ever, providing the same great game as before, even if the controls feel somewhat unnatural at times.