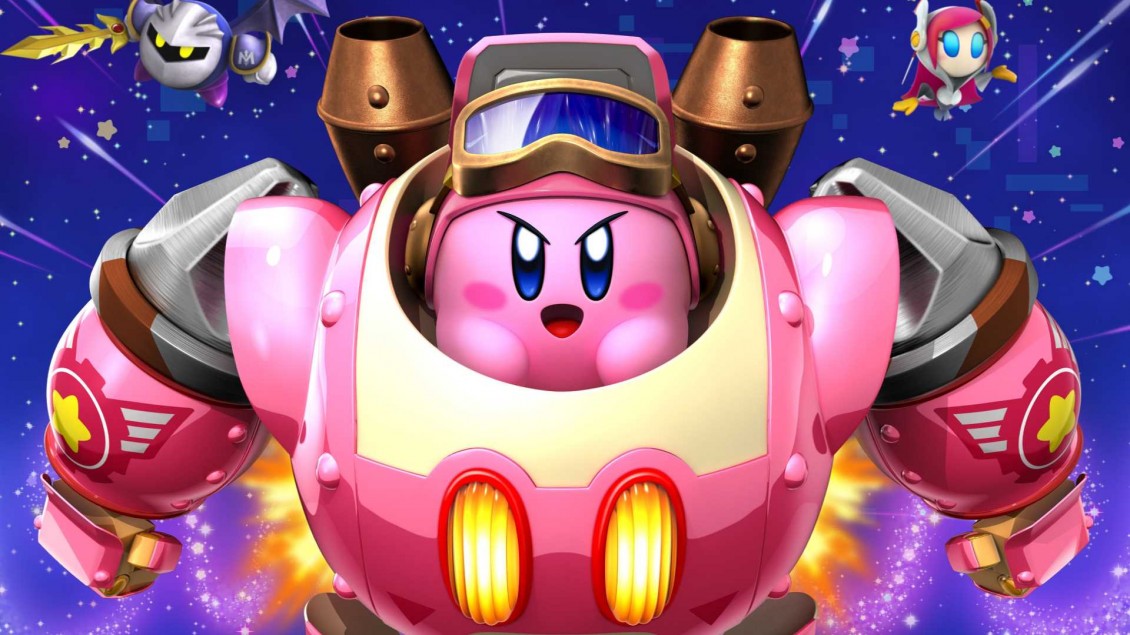 There’s something about Kirby, every adventure he goes on, we’re always introduced to him sleeping or eating. He’s a lazy sod until something turns up that plunges Planet Pop-Star into chaos at which point he puts his hero eyes on and sets out to right the calamity befalling his world.

In this instance the big bad is the Haltmann Corporation, a company that moves from world to world, removing all of their natural resources and converting the wildlife into mindless machines (methinks Eggman is moonlighting). Waddle Dee’s wander the levels with sci-fi style eye scopes fused to their heads, and old bosses turn up with tech overhauls granting a kind of dark body horror to proceedings which is in stark contrast to the gloriously bright and colourful world that Kirby and his friends inhabit.

Aside from the technological makeover the levels have had, the adventure immediately feels familiar. Kirby waddles in his usual way, a double tap and hold making him run to whichever way you’re pointing him and double jumps allowing him to inflate and float over swathes of obstacles. The floating isn’t the point though, and it’s through great level design that HAL Laboratories gives you reasons to float, but also spend most of your time on the ground to pick up stars or suck up enemies to steal their powers. Levels take place across multiple planes with enemies attacking and moving back and forward between them as they see fit, while other elements move in pre-arranged patterns in and out of the screen giving the system’s 3D effect a good work out. This does have a drawback, as even on a New 3DS system when there are multiple moving elements across many planes there is significant slowdown, but, it only seems to happen in the early stages, with later levels seemingly better equipped to deal with it, despite a lot of level furniture.

So, what of the game’s new core selling point? What of the Kirby Robot suit? The first mini-boss you come up against is an enemy in a rickety mech suit, once the battle is won, our ever curious Kirby jumps in and transforms the mech into his own image by giving it a great pink makeover. While in the suit Kirby can hover for a short time, and can punch enemies from a respectable range. But the suit also gains Kirby’s copy ability, allowing it to absorb enemies and use their powers to become a flamethrower, giant boombox or even a car or a plane. Essentially the robot suit takes the place of the super-powered abilities from earlier games, as when boosted by the suit they gain a considerable amount of potency.

Over the course of the six areas many puzzles are geared around the suit and it’s use of enemy abilities; circuits need to be completed, screws undone, and water frozen, but they’re hardly ever taxing as the required ability is normally gifted to you by convenient enemy placement at the time you’ll need it.

And the phrase “not taxing” is a theme throughout Planet Robobot: levels are shorter, only a few puzzles aren’t easily solved, and boss patterns are relatively simple. There are collectibles in the way of three code cubes per level, and stickers to grab. The stickers are fun to collect, as they allow you to customise your robot’s forms by placing one on each arm, these then appear whenever you adopt those forms, while the code cubes unlock extra levels in each world area, this adds replay value lengthening the game’s lifespan slightly but compared to the Wii’s Return to Dreamland Robobot is still a brief cakewalk.

Despite being short and easy, Planet Robobot is really fun to play, and a joy to look at. HAL has done a great job on the animations, with such an eye for detail. There are so many great little touches that many will go unnoticed as they’re really blink and you’ll miss it moments. It looks really sharp and smooth on the screen as well, with very little in the way of jagged edges. A little bit of slowdown is a small price to pay for a game that looks as lovely as this.

There’s a bunch of other stuff to do outside of the story mode, from the start 3D Rumble and Team Kirby Clash are available to play. The former is a wave based romp to amass combos to achieve a high score, while the latter is a mini-RPG of sorts with you taking on bosses with either friends or AI controlled Kirbys; you choose a class, beat a boss and gain xp with each victory. Both are really good distractions from the main quest.

Completing the game also grants you access to Meta Knightmare Returns (a mode returning from Kirby: Nightmare in Dreamland), where you control Meta Knight and take on truncated versions of the main story’s areas formatted into singular time trial levels. As well as that there’s the usual Arena mode where you’ll need to beat each boss one after another with selectable power ups and a health boost between each fight.

So, while the main story is easy and doesn’t last all that long, there’s plenty of stuff to do here that will lengthen the time it takes to get that 100% save file. Kirby’s charm is infectious, his innocent face and cute utterings will have you grinning from ear to ear. If you don’t like Kirby, then that’s on you, but this is well worth a visit to Planet Pop-Star.

Are you buying the new Kirby? Support us by purchasing through these links…

Too short
Too easy

Not the longest or hardest game ever, but it’s a thoroughly good time while it lasts.

Inkulinati tips | 8 helpful tips to get you winning quickly
Inkulinati best unit guide | Pick the right units for the job
Dead Space | How to get your deluxe edition suits
How long to beat Dead Space (2023)
Forspoken | How to get Frey’s cat familiars
How long to beat Forspoken
Social Media
SUBSCRIBE
All content copyright GodisaGeek.com
Fonts by Google Fonts. Icons by Fontello. Full Credits here »
Posting....