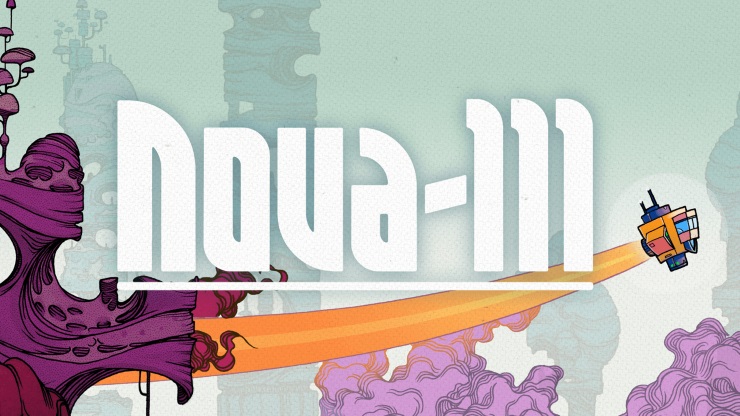 The only cliche you will find in Nova-111 is the good old “rescue the scientist from a certain doom”. From all other angles, Funktronic Labs have tried to take your expectations of a puzzle game and have a damn good think about how to give it a twist. The end result is a refreshing change from other games in the genre that forces you to really think when you’re playing, and it works surprisingly well.

In theory, it’s like mixing caramel and salt, or chocolate and chilli: on paper it doesn’t and shouldn’t work, but it does. In Funktronic’s case they are mixing live strategy and turn based elements to the same tasty treat success.

It works rather simply. You make a move that uses up a turn and at the same time your enemies will do the same. You have the ability to skip turns that allows you to move enemies into vulnerable situations before you take them out, but there are also live action enemies that will need to be tackled on their own terms. One of the first enemies will shoot a laser ball at you after charging, so if you time your movements correctly, you’ll be able to safely move after they fire so you can ram them. Another one attacks in real time by grabbing you with a vine before trying to hit you with a smaller bolt of energy that heads towards you, so speed is of the essence over the number of moves that you take. Very quickly you will end up in the situation where you are facing more than one type of enemy, both turn-based and real time and this is where Nova shows the first sparkles of its magic.

Your ship, the Nova, isn’t a military vessel, fitted with guns and bravado. You’ll be ramming your enemies most of the time, or forcing friendly fire situations between them. You will get a beam weapon early in the game that will allow you to do some near side damage and a Polybomb that again relies on you getting up close and personal. The Polybomb needs you to collect gel in order to charge, while other skills like the beam simply need to charge across two or three turns. This leads to its own strategy, as you can end up jumping spaces in order to prepare your attacks while dodging your foes. It also can lead to panic at some points, because you will waste a beam on breaking down a wall, or shooting an enemy that you should have rammed and some of the areas will need you to mix between moving fast to remove threats or hanging back to pick the aliens off one by one. As you progress, entire areas will work like chains of puzzles, where you’ll sometimes need to follow a sequence of actions in order to succeed. If you make a single mistake it can mean you’ll have to complete an entire area again before you’ll get a run at where you failed. At the end of every area you come up against a boss level, which in itself is a huge puzzle that needs to be cracked.

In the middle of these well thought-out mechanics, Nova-111 keeps its serious side in its other trousers, by providing assistance from Dr Science, the first of many you’ll rescue who stay on to comment and name the enemies you come across, as well as provide information on the equipment you’ll pick up on your travels with the occasional funny little quip or jest. Sometimes the jokes are on the money and other times you’ll cringe, but it never gets tiresome. As you progress, you might find you’re ignoring some of what he says, and I can see him irritating those who play for prolonged periods of time.

Funktronic have put some thought into the visuals. I wouldn’t label them as simplistic as such, but as a player you need to be able to quickly recognise the potential threats you are facing. With this in mind, enemies have a distinct look so you’ll never be easily confused as you play through and each of them has its own individual personality, which is a difficult thing to do when the game often restricts the number of moves they can make. Scenery and the backgrounds are very well designed, but again they never seem to be in your face or block out what you need to see. In all honesty, Nova could be played on a simple virtual grid and still provide the same level of entertainment it does with the multiple planets. Funktronic have spent time designing the window dressing over what could have been a very sterile affair, even making sure you know where you have been or need to go by the way in which the surrounding areas are revealed. My only complaint is that the first section seems to go on for the longest time before you move to a different background theme, though this is understandable due to the number of levels you go through while learning the basics. There are a few gripes that might diminish your enjoyment, the first one being that while there are side routes you can take to find upgrades or bonuses or, if you’re really lucky, an additional scientist that needs rescuing, the route through Nova-111 is a linear path. So while the enemies you meet will offer different tactical opportunities, you’ll never be in the situation where you have the complete freedom to go from A to Z and decide how you tackle the points in between. You are always heading down a set path until the very end, and for some that may prove to be too pedestrian.

The other gripe is the spacing of checkpoints for restarts, and this is only because of the nature of discovering new enemies and how they’re utilised further in the level. On occasions you can be left facing several old and new enemies at once towards the end of the section. Failure to reach the end goal can resort in you having to complete an entire section again. Sometimes this means repeating several easier sections if you are struggling at the end point, which can increase any potential frustrations you might have until you do beat the level.

What this does emphasise is the need to take your time, make sure you are using your turns and weapons cleverly and remember the mixture of live action and turn-based enemies all have a weakness. Funktronic Labs have developed something unique and pleasantly different from what is currently on offer on the PSN market. If that is what you crave among the 100 hour plus behemoths that are ten a penny on Sony’s machine at the moment, then maybe Nova-111 will help scratch the cerebral itch in your gaming library

Easy to learn.
Doesn’t take itself seriously.
Some of the levels offer a brilliant challenge.

Too linear at times.
Checkpoints can be unfair.
Lots of puzzles.

A unique blend of action and puzzle-solving that knows when to poke fun at itself.